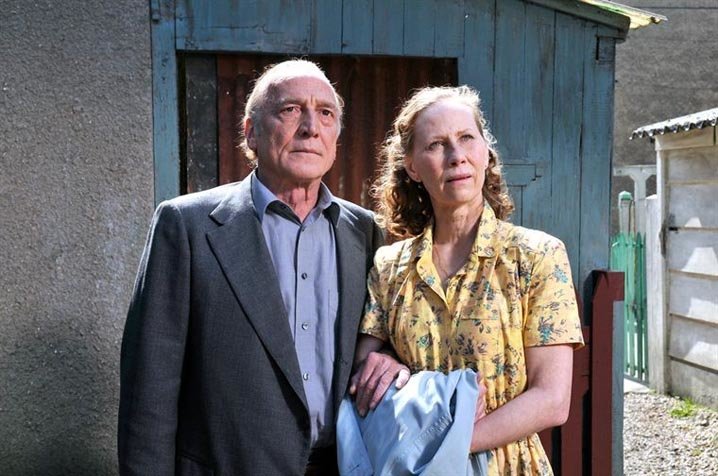 "Since the early 1980s, Finnish auteur Aki Kaurismäki has been mining his own peculiar seam and achieving a quiet miracle — making films that gladden the heart the most when they're at their most unflappably lugubrious." Jonathan Romney for Screen: "Le Havre essentially offers us the director's usual menu — poker-faced acting, weather-beaten faces, political compassion, hyper-stylized staging and decrepit barroom interiors lit con amore. But there's something fresh in this new film, which sees the Finn fully venting his Francophilia for the first time since 1991's La Vie de Bohème."

"Le Havre is shot in the French port town, with French actors and dialogue, though Kaurismäki's repertory stalwart player Kati Outinen has a role," notes the Guardian's Peter Bradshaw. "She plays the wife of Marcel (André Wilms), a dignified, stoic man who works as a shoeshiner on the streets. Marcel witnesses an illegal immigrant boy from Gabon, Idrissa (Blondin Miguel), escape from the police and sets out to help him. But a tough cop, Inspector Monet (Jean-Pierre Darroussin) is on his trail, not to mention a mean-spirited local given to making anonymous denunciations. Kaurismäki's movie moves lightly but elegantly and quickly, like a little jockey on a powerful horse. In the hands of someone else, this film might seem unendurably twee and affected, but its charm and good nature carry it along. Somehow, for all its comedy and absurdity, Le Havre addresses its theme with more persuasive confidence than many a grim social-realist picture…. What a treat this film is."

"Understand, the whole story, its characters and locales, is something of a fairy tale informed by old movies," writes the Hollywood Reporter's Kirk Honeycutt. "Kaurismäki doesn't 'quote' old movies or parody then, he simply acts a though he were on a studio backlot making an old-fashioned film where working-class people can perform heroic deeds, idealism is never scorned and even a crafty cop — think of Claude Rains in Casablanca — can have a soft spot. To gently underscore this time warp, Kaurismäki lights and films cafes, stores and car interiors as if they were fake sets. In one scene he'll show a mobile phone yet in another a rotary dial telephone. You can spot references to any number of old movie styles and filmmakers but Kaurismäki has so absorbed these into his own DNA that this fairy tale feels completely, organically his own."

"It's all rather jolly and slight, and certainly doesn't break any new ground for the Finnish auteur, even though it foregrounds more influences than usual from French filmmakers like Marcel Carné (obvious, given the protagonists' names), Jean-Pierre Melville, Robert Bresson and others." Leslie Felperin in Variety: "But on its own terms, Le Havre is a continual pleasure, seamlessly blending morose and merry notes with a deftness that's up there with Kaurismäki's best comic work. Craft contributions from regular alumni Timo Salminen on camera and Timo Linnasalo at the editing table ensure the pic has the same glowing colors, stylized lighting and crisp pace auds have come to expect from their collaborations with Kaurismäki. It's like listening to a band that's been cheerfully churning it out for years, whose members all know each other's timings inside out."

"A political film that eschews politicking, a comedy with a serious point, and imbued with a deep, emotional core, the latest from the Finnish director received hearty applause from the critics at Cannes and now matches The Artist for the biggest, most rousing crowd-pleaser of the festival," writes the Playlist's Kevin Jagernauth.

"It has immense, minor-key charm," chimes in the Telegraph's David Gritten. Grades are riding high at Micropsia.

Update: For Glenn Heath Jr, writing at the House Next Door, La Havre "seems a dim reflection of more substantial earlier work, another slow swing at an already exploded piñata…. That's not to say La Havre isn't sweet, relevant, and occasionally moving. But the unadulterated sameness of the film reveals a talented director recycling the same ideas without evolving beyond the expected."

Updates, 5/18: "Le Havre proceeds from the usual Kaurismäkian premise," writes Movieline's Stephanie Zacharek. "Things are only going to get worse, so why not just go with it? And still, Kaurismäki infuses the picture with a kind of oddball grace…. Le Havre is a wry mini-treatise on the necessity of being kind and having guts. It also has a blissfully happy ending that still manages to be true to Kaurismäki's dour humanist spirit."

"Le Havre sneaks up on you," writes Salon's Andrew O'Hehir. "For a while it's just a dry, amusing blend of familiar archetypes — along with the crusty old codger, a kid who wants to find his mother, a dying woman, and the old-time neighborhood, let's add a classic French 'floc,' or cop, in a black trench coat, marvelously played by Jean-Pierre Darroussin. (Let's just throw this out for future consideration: Le Havre as a possible remake of Casablanca.) And then these people and the exquisite comic timing and the peculiar tone and the dog named Laika (!) and the benefit concert by Little Bob, the 'Elvis of Le Havre,' become something bigger than cinema, something as impossible and ridiculous as human goodness in a terrible world."

"Finally Cannes delivers some real laughs!" exclaims Barbara Scharres over at the Chicago Sun-Times. "Le Havre blithely portrays life as we might wish it to be, and that is the funniest irony of all."

Liam Lacey for the Globe and Mail: "Kaurismäki said he has wanted to make a film about the treatment of illegal immigrants in Europe for some time, 'and though I'm probably not the best person for it, nobody else seemed to want the job. But since I'm not a political or a documentary filmmaker, I decided to make a fairy tale.'"

"Kaurismäki's wry take on immigration — an especially thorny subject in France — moved one journo to talk back to the screen," notes Melissa Anderson at Artforum. "When a character solicits the opinion of a Vietnamese friend of Marcel's, he responds, 'Hard to say, for I don't exist'; one row behind me, I heard someone, thrilled to have his own views validated, proudly rejoinder, 'Voilà.'"

Geoff Andrew for Time Out London: "Every frame, every line of dialogue ('L'argent se roule dans le crépuscule' — 'Money walks in the shadows' — opines the epigrammaically inclined Marcel), every bit of casting (Pierre Étaix as a doctor, Jean-Pierre Léaud as a bigoted neighbour) is pure Kaurismäki. Only the use of the music of octogenarian Finn Einojuhani Rautavaara — rather than the expected Tchaikovsky — on the soundtrack comes as a surprise; but even that is an inspired choice, and like everything else in this lovely movie, something to savor."

Mike D'Angelo at the AV Club: "I don't want to beat up on this small, well-intentioned, passably pleasant trifle, but people are actually touting it as a favorite for the Palme d'Or, which is insane. Or at least it oughta be."

"Like the amnesiac at the core of his previously acclaimed comedy The Man Without a Past, Marcel's pathos come from his status as a character with nothing to lose until he discovers a reason to care about the world again." Eric Kohn in indieWIRE: "Pitting that grandiose takeaway with the director's intentionally over-the-top stylistic dalliances, Le Havre maintains a fresh balance that never falters."

Updates, 5/20: "Toward the end a slew of miracles materialize, suggesting that Kaurismäki sees Le Havre as a fable about working-class sanctity." Mary Corliss for Time: "That puts the film out of its element, and the director out of his. May he return to Finland and continue to paint deft, dour sketches of his idiosyncratic countrymen."

Here in The Notebook, Daniel Kasman explains what it is about Wilms's voice in this film that appeals to him.