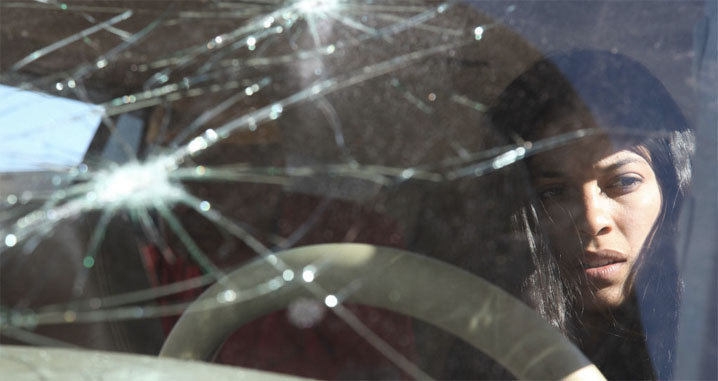 To follow up on yesterday's "Snapshot" from Marie-Pierre Duhamel, a roundup of what, in this case, we might as well refer to as The Raves of Others.

"Inspired by the true story of a Tijuana beauty queen who got mixed up with the local narco gangsters, Gerardo Naranjo's Miss Bala is a ferociously paced crime thriller, filled with atmospheric detail and exceedingly bleak humor," blogs the Voice's J Hoberman. "Here, even more than with his Godard homage youth film I'm Gonna Explode (the great discovery of the 2008 New York Film Festival), Naranjo demonstrates an impressively fluid camera, a feel for location, and a terrific rapport with actors. Stephanie Sigman, the natural beauty who innocently stumbles through the looking glass to find herself catapulted into a series of increasingly violent gangster transactions, as well as the televised Miss Bala pageant, exhibits tremendous poise in her first major role — one that requires her to be present in virtually every scene."

"Much like the Bolsheviks and Czarists battling in Miklós Jancsó's harrowing The Red and the White, Gerardo Naranjo makes the often-faceless Tijuana police and brutal criminal syndicate sound ideologically identical in his harrowing formalist assault Miss Bala." Glenn Heath Jr at the House Next Door: "The long take plays a crucial role in establishing the infinite possibilities of violence and death in any one given moment, and Naranjo sees the overlapping patterns of off-screen sound as audible meat grinders crushing any potential hope for innocent characters in distress…. As a political and social document, Miss Bala is shock, awe, and pure cinema at its finest."

"A brooding sense of despair and helplessness pervades the script by Naranjo and Mauricio Katz, more in the mood of a horror film than a shoot-em-up," writes Deborah Young in the Hollywood Reporter. "Like the Italian film Gomorrah, which described the way the organized crime operates in Naples, Miss Bala derives much of its interest from its insider's view of drug traffickers who live in conniving symbiosis with the police."

For Variety's Peter Debruge, Naranjo's Un Certain Regard entry "delivers on the promise of such well-respected early pics as Drama/Mex and I'm Gonna Explode, revealing them as dry runs for this Scarface-scary depiction of south-of-the-border crime run amok…. Though light on music, the pic achieves just the right uneasy effect through Pablo Lach's careful sound design, which makes even silences sound ominious. Fellow AFI alum Tobias Datum (who supplied Naranjo's last two features with much of their vivacity) isn't with him here, but award-winning Hungarian lenser Mátyás Erdély helps the director bring a measure of blood-chilling control to the whole horrific affair, elevating the entire aesthetic in the process."

"The film leaves a number of lingering questions in the mind including why Lino [Noé Hernández] and the gang decide to make continued use of Laura rather than killing off what would seem a minor inconvenience to them," writes Allan Hunter in Screen. "The idea presumably is to show that anyone, especially a pretty young woman, is a commodity to be used at the whim of anyone who chooses to exercise power in what appears to be a vacuum."

"Bodies drop, people are left to die, blood runs freely. But most haunting of all, the dead are forgotten, just collateral of a larger fight that has no end in sight." An A- from the Playlist's Kevin Jagernauth.

"I heard one prominent critic in the hallway after the screening complaining that some of Naranjo's plot twists were implausible, but give me a break," writes Salon's Andrew O'Hehir. "First of all, much of Naranjo's point is that almost nothing is implausible in the upside-down world of Tijuana, where it's nearly impossible to identify a clear line between cops and criminals. Secondly, while Miss Bala strives for a naturalistic feeling and draws on some recent criminal history, it's a bullet-riddled downhill thrill ride about a would-be beauty queen and a drug lord, not The Bicycle Thief."

And here are two more clips: 1, 2. At Ioncinema, Eric Lavallee has video from the night of the premiere; Micropsia is collecting grades.

Update: "I suspect people will look back at the lineup in years to come and marvel that this powerhouse wasn't in Competition," writes Mike D'Angelo at the AV Club. "He wasn't kidding: He was gonna explode…. I'm tempted to utter the ultra-hype phrase 'not since Heat' — as well as, I believe, a corrosive metaphor for the brutal demands society makes of women in exchange for success. That the film concludes with a banal scrawl detailing the human cost of Mexico's drug war potentially undermines that reading, admittedly, and it may take a second viewing for me to work out whether Miss Bala is as powerfully subversive as I'd like it to be or just an unbelievably exciting just-say-no tract. But since I can't wait to see it again, that's hardly a problem."

Updates, 5/15: Daniel Kasman: "In Miss Bala each shot contains a discovery of space, light and movement, and then before Naranjo cuts away he lets that camera do something else too — there is always something more, an extra detail, a new reveal, a subtle movement. Often it's a slight shift in perspective — the image will start as an objective shot of a space, and when our heroine moves into the frame she re-defines the camera angle as her own, it's movement as her movement. It makes each shot a pleasure, a richness, and, sometimes, an event."

"As controlled as the filmmaking is, there's still a sense of barely contained chaos pushing in at the edge of things that made Miss Bala one of the most tense film experiences I've had in a while," writes Drew McWeeney at HitFix.

Update, 5/16: "Stephanie Sigman's would-be beauty queen character is barely developed, making it difficult to invest in her escalating punishment," finds Karina Longworth, blogging for the Voice. "As she's shuttled between increasingly bizarre stages of exploitation, her receding personality seems increasingly like a deliberate strategy to set up one woman's suffering as a stand-in for the rape of a nation — a suspicion bolstered by Bala's gratuitous film-closing on-screen titles, reminding us that The War On Drugs is, like, bad, especially for women."

Update, 5/17: Time Out New York's David Fear: "The movie is indeed one of the best, most brutal nailbiters I've seen in a while, but a cutting commentary or thought-provoking treatise on the ills that plague Mexico it is not. You're better off just enjoying the rush."