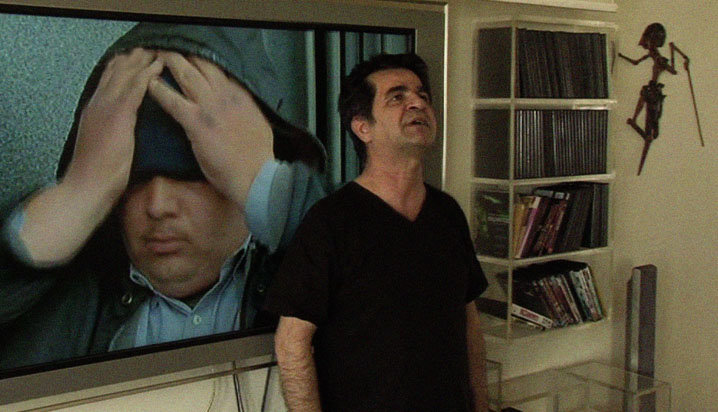 "Most prints for films premiering at Cannes are delivered to the Croisette by private helicopter, or clutched in the sweaty paws of their devoted directors," begins Catherine Shoard in the Guardian. "Jafar Panahi's new film, This Is Not a Film, was smuggled into the country on a USB stick buried inside a cake posted from Iran to Paris. Panahi, the virtuoso neo-realist who won a prize at Cannes for his debut, The White Balloon, in 1995, and, at 50, now has one of the most sagging mantlepieces in cinema, is currently stuck in Iran, awaiting the verdict of his appeal against a six-year prison term, and 20-year-ban on filmmaking, talking to the press and traveling abroad…. So This Is Not a Film was presented by its nominal director, Mojtaba Mirtahasebi, who spends a day with Panahi in his high-rise apartment, sipping tea, chewing sugarlumps and watching the director map out scenes from a screenplay he's been working on. It sounds earnest: in fact it's fantastically entertaining, full of incidents that would be too far-fetched for the wildest farce."

"The disingenuously titled This is Not a Film… is by its very nature one of the most vital films in Cannes," argues Gabe Klinger, writing for Sight & Sound. It's "built from nothing, and yet every moment has a powerful urgency to it."

"This Is Not a Film, shot in digital with what looks like a consumer-grade camera and a cellphone, lasts a fleeting but rich 75 minutes." Manohla Dargis in the New York Times: "It is a day-in-the-life portrait of Mr Panahi, who's first seen in his bedroom listening to a phone message. Over the course of the movie, as the day wears into night, he takes calls, feeds his daughter's alarmingly large (and free-ranging) pet iguana, watches news images of the Japanese tsunami (you can see the March 2011 date stamp), receives a visit from the largely unseen Mr Mirtahmasb and talks to several other visitors. Possible gunfire and explosions, along with the intermittent wailing of sirens, can be heard throughout. It's later explained that what sounds like explosions is fireworks, though it's clear from Mr Panahi's comments and the movie's fiery final image that the conflagration the booming suggests is entirely real. Mr Panahi often looks straight at the camera as he addresses Mr Mirtahmasb and, by extension, the world, to explain the terms of his sentence, saying he doesn't want other Iranian filmmakers to put themselves at risk on his behalf."

"From the first scene, Panahi acknowledges that he will almost certainly go to prison and that none of his peers can help out," writes indieWIRE's Eric Kohn. "'If they make the slightest move, they'll be banned as well,' he sighs. The only man capable of doing something about Panahi's conditions is the man himself. Proving the personal connection he has to his work, Panahi uses his existing films to analyze his situation. He plays a scene from his second feature, Mirror, in which a young girl decided she didn't want to act anymore and removed the cast her character was supposed to wear. 'I think I'm in the same position,' Panahi says. 'I must remove the cast and throw it away.' By that he means he wants to tell the truth, complaining that he came across in earlier scenes as more character than the real thing. Panahi wants to get real and quickly does."

"In the middle section of the film," writes Barbara Scharres for the Chicago Sun-Times, "Panahi gets out his most recent banned script and proceeds to block out scenes in his living room while describing the story of a young woman whose religious family locks her up to prevent her from registering for the university. He points out that the ban prevents him from directing, but not from reading a script out loud or acting. He can't resist calling out 'Cut' at points, but Mirtahmasb mildly reminds him, 'You are not directing; it's an offense.'"

"In the film's final section, filmed by Panahi himself (now manning the professional camera and not the i-Phone)," adds Stephanie Zacharek at Movieline, "an impromptu encounter with a young man who's filling in for the building's superintendent becomes a kind of mini-Panahi film. Pictures like The Circle and Offside are deeply political movies that derive all their meaning from depictions of people's everyday lives, rather than from any contrived arrangement of abstract ideas. By the end of This Is Not a Film Panahi, going from floor to floor with this affable, photogenic guy (he's also a student) as he collects the residents' garbage, has turned the camera away from himself and out toward the world, even if that world is only an elevator and, later, a courtyard beyond which lies a blazing bonfire that may or may not be celebratory. This Is Not a Film is so technically modest that it almost isn't a film. Yet in its simplicity it's as direct as a laser beam, underscoring why Panahi is considered so dangerous by his country's government: The difference between just looking and really seeing is second nature to him."

"Because he has been forbidden from directing, others must do it for him; hence, one message features his son explaining that he set up the camera on a chair." Peter Debruge in Variety: "Such precautions are strictly semantic, of course. Panahi can call this assembly whatever he pleases (the end credits refer to it as 'an effort by' him and Mirtahmasb, with all other credits/thanks left blank), but Iranian authorities aren't likely to share his sense of humor. Besides, Iranian directors are notorious for spinning elegant parables from minimalist situations, such as buying a goldfish (Panahi's debut, The White Balloon) or losing a pair of shoes (Children of Heaven), and this project feels none the slimmer for its humble constraints. If anything, it marks a courageous act of non-violent protest."

"It's likely to engage the world film community that has supported Panahi and Mohammad Rasoulof after their arrests," writes Deborah Young in the Hollywood Reporter, noting, of course, that Rasoulof has a film in Cannes as well, Good Bye.

Livia Bloom clarifies a few matters at Filmmaker: "Contrary to many reports, including those published by the New York Times and the Hollywood Reporter, Panahi was not under house arrest while making the film, nor is he currently in prison. According to co-director Mirtahmasb, who is in attendance at the Festival, Panahi currently is — and was during filmming — allowed to travel anywhere he wishes within Iran's borders." His "prison term will not begin until after the appeal process is completed."

At Micropsia, the grades are currently averaging 7.38 out of 10.

Updates, 5/23: "The film of the festival of 2011," declares Daniel Kasman here in The Notebook. Panahi and Mirtahasebi, "using the barest means but inspired by their art, their passion, and their existence in the world, have crafted one of cinema's rare masterpieces of truth."

"[B]y far the most powerful and moving film screened at Cannes," agrees Richard Porton, writing for the Daily Beast. "Panahi, far from a saintly martyr, emerges as an engaging, but complicated, man whose fate put him in the spotlight of the international media."

Update, 5/25: Ryland Walker Knight for Cargo on This Is Not a Film and Chronicle of a Summer: "Method meets meaning for a felicitous conversation open to any and all tangents, including the darker sides of the world that straight fiction aims to paper over and avowed non-fiction often renders bathetic."