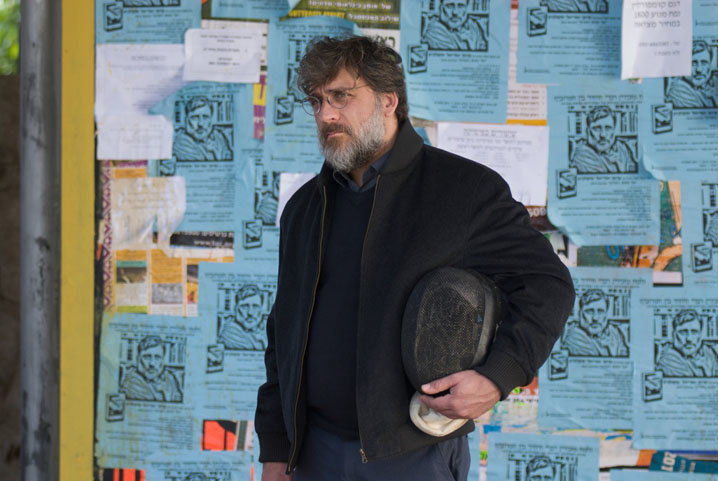 "An intriguing tale of an ethical dilemma complicated by academic rivalries and family tensions is told in erratic fashion in Footnote," begins Todd McCarthy in the Hollywood Reporter. "In his fourth feature, New York-born-and-trained Israeli writer-director Joseph Cedar arrestingly tackles what feels like deeply felt personal material, a simmering intellectual and emotional feud between a comparably brilliant father and son, but makes several crucial miscalculations, beginning with the use of one of the most intrusive and overbearing musical scores in memory."

"Eliezer Shkolnik [Shlomo Bar-Aba], a curmudgeonly professor, and his son Uziel [Lior Ashkenazi] are both well-known Talmudic scholars and researchers," explains Barbara Scharres, blogging for the Chicago Sun-Times. "Uziel, however, reaps awards and honors galore, while his jealous father has suffered a career of being overlooked. Uziel wins a major academic award in their mutual field, but through the mistake of an office assistant, Eliezer is informed that he is the winner. When the awards committee attempts to solicit the Uziel's help in rectifying the situation, he pleads his father's case and demands that they honor the mistake. Instead of glorying in the prize he has long sought, Eliezer uses it as a platform to publicly denigrate his son's career, widening the gap between them."

"Likely, in many ways, to be one of the most unusual films contending for the Palme d'or, this fourth feature from Israeli writer-director Joseph Cedar will undoubtedly divide critics; already one eminent French critic told me of his bewilderment that such a heavy-handed, unamusing comedy had been chosen for the main competition. But that's perhaps to misread Cedar's intentions; while there are plenty of scenes which this writer, at least, enjoyed for their wry, bone-dry humour, much of the film operates in a rather more serious register. Indeed, it might even be seen as a mini-tragedy about sacrifice and temptation." Four out of five stars from Geoff Andrew in Time Out London.

Cedar, winner of the Berlinale's Silver Bear for Beaufort (2007), which was also nominated for a Best Foreign Language Film Academy Award, "shifts sympathies back and forth as frequently as he changes tone from jokey to bitter, skewering ivory tower blindness with some wit and, just occasionally, emotion," writes Variety's Jay Weissberg. "Academic researchers rarely make for dynamic screen material (unless there's sexual hanky-panky involved), so Cedar goes to great lengths — indeed, too great — to turn editing and music into the driving force behind the pic's liveliness."

In one scene, "Uriel faces down Eliezer's longtime competitor, the cruel Professor Grossman (Micah Lewensohn)," notes indieWIRE's Eric Kohn. "Old conflicts, interpersonal politics and insurmountable moral quandaries bubble to the surface in a fascinatingly tense exchange. The fallout, in which Uriel ponders whether it's worth ceding his honor to his ungrateful pop, lays out the awkward social conundrum as if it were Curb Your Enthusiasm by way of Saul Bellow."

Dan Fainaru in Screen: "Some of the conflicts in the film will be more evident to Israelis, only too familiar with the traditional arguments, gossips and squabbling around the Israel Prizes, with unsatisfied candidates bypassed by the selection committees, exposing their complaints and aggravation in the media. Also, the prolonged exposition and the conflict that will complicate their already uneasy relations may appear at first to be rather fussy and even nagging, as the whole family background has to be introduced and the nature of the protagonists' occupation has to be clarified. But thanks to Cedar's humorous, at times even sardonic, way of dealing with this material, tackling stuffy themes with a light touch and alertly moving forward with the imaginatively skillful assistance of editor Einat Glaser-Zarhin, the risk of losing his audience is smilingly avoided."

Update: "Cedar displays here a flair for light comedy," writes Mike D'Angelo at the AV Club. "The performances, too, are first-rate… Still, it's hard not to feel as if much engaging ado is being made about not a whole lot, and the film's tacit (and titular) acknowledgement of that fact doesn't do much to compensate."

Updates, 5/15: For Charles Ealy at the Austin Movie Blog, Footnote "ranks as one of the best surprises of this year's Cannes Film Festival." It's also "more universal than it seems. Academic battles occur around the world, at nearly every university, and Footnote brings those intellectual conflicts to life in an amusing way."

Update, 5/16: "Inside the Plage Blanche, a posh private beach club with tight security just off La Croisette, a spot where it is quiet enough to hear the waves break, an intimate party is beginning," writes Kenneth Turan in the Los Angeles Times. "I am in a sanctum within that sanctum, in a small space temporarily walled off by tall bamboo screens so that I can have a conversation with the writer-director. Cedar, 42, is Sabbath-observant, so this is the first opportunity anyone will have to talk with him about his work, and I am braving the chaos and staying up late because Footnote is the film I've enjoyed most at the festival so far."

Updates, 5/17: The Guardian's Peter Bradshaw notes that "some have sniffed at [Footnote] for being middleweight entertainment. For me, it was an elegant literary diversion, with something of Nabokov or the English campus comedies of David Lodge and Malcolm Bradbury. There was also some nifty storytelling — sometimes a rarity in the Cannes competition — and it was let down only by one untied plot strand that may have been lost in the edit…. It may not get a prize, and there will be many who think that Israeli films are only admissible if they address the Palestinian issue, but Cedar's film more than justified its inclusion."

For Guy Lodge at In Contention, this is "my least favorite film of the Competition so far, if not emphatically the worst…. [T]he film's niche narrative isn't made any more penetrable by affected comic styling that sees the film split into random, bitty chapters and overlaid with a frenetic, over-cranked score that swiftly induced a headache."

Update, 5/20: "Rigorously balanced in its sympathies, and with a piercing view of human behavior under stress, the film is a human comedy that spans and understands the generations," finds Mary Corliss, writing for Time. "This subtle delight is no mere footnote to the competition slate; it is one of this Festival's glories."