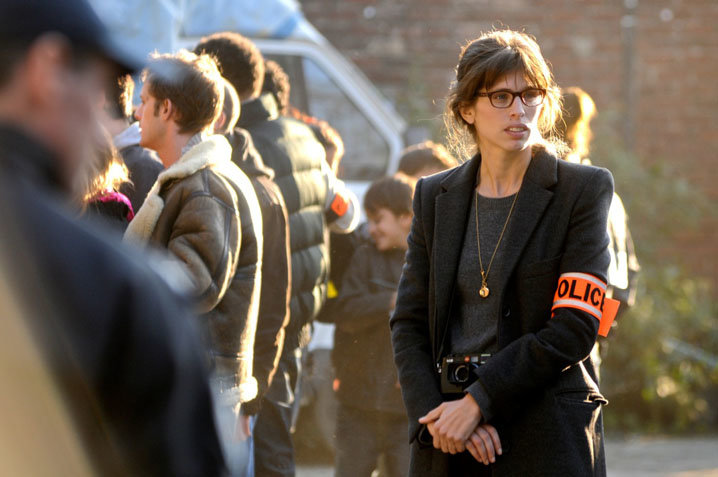 Let's note right off the top, first, that the title's derived from the director's misspelling of "Police" and that the final "e" has been dropped for the English-language version. And second, that critics are split. We'll start with pan but work our way up.

"Polisse, a self-important French police procedural that feigns complexity while relishing in cliché, could very well be the worst film I see at Cannes this year," predicts Glenn Heath Jr at the House Next Door. "Supposedly based on the true stories of the Parisian Child Protective Unit, director Maïwenn Le Besco's film abrasively documents the professional and personal lives of the special police force tasked with arresting those who prey on the young…. As a social mosaic, Polisse is an insulting simplification of truly horrific issues like child rape and sex trade."

More predictions, these from Jonathan Romney in Screen: "It should flourish in France, where it is released in October, not least thanks to an illustrious cast. Abroad, its profile should be aided by superficial affinities to recent, very different successes A Prophet (which generally boosted the cachet of the realist French policier) and Laurent Cantet's The Class, with which it shares its loose structure and quasi-documentary behind-the-scenes feel."

Jordan Mintzer for the Hollywood Reporter: "Honing in on the fervent style that marked her self-confessional debut, Pardonnez-moi, and her mockumentary on Gallic stars, The Actress' Ball, but applying it to a much broader playing field set within the world of pedophile crime investigations, the 35-year-old Maïwenn presents an engrossing network narrative that benefits from the impressive work of nearly a dozen talented French actors. Like a whole season of The Wire packed into a single two-hour-plus film, Poliss covers much ground, and even with its loose threads and frenzied structure, it convincingly jumps from laughter to tears and back again, never losing sight of the brutal realities at its core."

"The squad includes Nadine (Karin Viard), who's in the middle of a divorce and has to watch what she eats, while her work partner, Iris (Marina Foïs), swears by a little exercise (and some trips to the restroom)," writes Boyd van Hoeij in Variety, which seems to have opened up its Cannes section to non-subscribers. "Mathieu (Nicolas Duvauchelle) secretly carries a torch for his married partner, Chrys (Karole Rocher), who's just found out she's pregnant. The unit daddy is Balloo (Frédéric Pierrot), who allows Fred (Joey Starr), the resident hothead with the heart of gold, to crash at his place. Maïwenn is probably most famous Stateside for her supporting role in The Fifth Element from Luc Besson, with whom she had a child at 16. Here, she co-stars as a nerdy photog who has an assignment from the Interior Ministry to document the unit's work. Somewhat oddly, Maïwenn's character is one of the group's blander elements, as is the role played by actress/co-scripter Emmanuelle Bercot."

"Unveiling the hidden side of families, the police force and Paris, [Maïwenn] successfully plants an irrefutable stamp of truth to the BPM, like Tavernier did for the Stups drug squad in L627," writes Fabien Lemercier at Cineuropa. From his vantage point, Poliss has "taken the competition section by storm."

Charles Ealy at the Austin Movie Blog: "There's a never-ending cast of pedophiles making their way through the department: a father who molests his daughter; a Muslim who's trying to force his young daughter into an unwanted marriage; a band of crooks who are forcing their children into prostitution; a gymnastics coach who's fondling one of his students; a young girl who willingly performs oral sex on several guys in the hopes of getting her stolen smartphone back. It's a mixture of horror — and in the last case, appalling black humor."

"Maïwenn uses a shaky-cam style to give the movie a quasi-documentary feel, while drawing the established ingredients of conventional police drama. However, with its densely episodic structure, it's almost too busy with good ideas. And while the casual naturalism bears some similarities to the British political satire In the Loop, Poliss is ultimately too sincere to reach the same levels of caustic humor."

"In truth, Poliss is more TV movie than full-blown festival gold," writes Adam Woodward for Little White Lies, "but Maïwenn's cinematic disposition ensures that you'll be hooked for the two-hour run time. And that's vital when your dealing with graphic scenes of paedophilia, child drug trafficking and abortion."

Updates: "If one pries a little into Maïwenn's personal life, it is difficult to avoid relating many of its details to this film," suggests Charles H Meyer in Cinespect. "She was pushed into acting at an early age by her mother. Her second screen role, at the age of five, was as a victim of child molestation in Jean Becker's 1981 film One Deadly Summer." Then, the Luc Besson episode. "Leon: The Professional, a film famous for its controversial depiction of a twelve-year-old girl who apprentices herself to a hitman after her parents are killed. The character, Mathilda, played by Natalie Portman, is believed to have been inspired by Maïwenn, who met Besson when, like Mathilda, she was only twelve. Clearly, Polisse has personal significance for Maïwenn, some of whose previous work as a director has functioned as a way of working through the traumas she suffered as a child."

"Does it tell us anything we didn't already know about child abuse?" asks Geoff Andrew in Time Out London. "Well, maybe a little. But given its fundamental seriousness of purpose, maybe originality should not be considered its prime virtue – even though it's hard to imagine another film in which a game of charades centred on movie titles would name check both Carry On Camping and Contempt. But then that's the French for you!"

For Melissa Anderson, writing for Artforum, Poliss "stands out as the most clamorous, tonally awkward film shown in the festival so far…. One colleague admitted he endured the two-hours-plus running time just so he could hiss at the end; I wished I'd heard him over the stupefying applause during the final credits."

"When the film is true to itself it works wonderfully," finds the Playlist's Kevin Jagernauth. "It's refreshing to see a movie where cops actually laugh at the absurdity of stuff they have to deal with." But "details and honesty are only half a film that is largely one note and runs completely out of steam with still thirty minutes left to go. One can't help but feel that Polisse is, at least half of the time, the work of a filmmaker who isn't confident in what they have on the page, or simply isn't aware. 'Less is more' is a pretty tired phrase, but sometimes aphorisms exist for a reason."

"The ending's a melodramatic disaster," grants the Boston Globe's Wesley Morris. "Maïwenn spends a couple of hours making no false moves and two scenes making nothing but. Still, it's a tiny chink. This is a volcano of a movie that despises secret shames and the people, mostly men, who use sex and bad judgement to impose them. You can imagine a churlish drama in which right and wrong are put through some kind righteous spelling contest. But we know the difference, so for Maïwenn there's nothing to spell out. She luxuriates in the emotional and psychological complexities, while acknowledging that, with kids, innocence can also be a tricky business. Her filmmaking paces and perceives the way Frederick Wiseman's does. Her transparency simulates his. It's as if she's taken one of his documentaries about systems and their discontents and added Sidney Lumet's grit, naturalism, and fireworks. I might see a better movie in the next couple of days, but I'm not entirely sure how."

At the AV Club, Mike D'Angelo writes that, "while individual scenes are plenty compelling, the film as a whole never takes shape — a few scattered narrative elements seem to have been imposed from without rather than having arisen organically from within, and a major character dies at the end for no apparent reason other than the need for a plausible reason to end the movie. If they ever make Poliss as a TV series, however, this will be a dynamite two-hour pilot episode."

Updates, 5/14: For In Contention's Guy Lodge, "Polisse really finds its feet in its humane but matter-of-fact treatment of the cases themselves: two particularly wrenching scenes involve a homeless mother relinquishing custody of her child, and a teenaged girl (Alice de Lencquesaing, in a stunning mini-performance) delivering a stillborn child."

Daniel Kasman agrees that she "verily walks off with the film."

"I can't say I wasn't moved at points in the story since children make the best cinema with their lack of guile," blogs Ryland Walker Knight for Cargo, "but I can say that I was put off by some of the audience bait of a lot of the grandstanding."

Updates, 5/16: "Perhaps it is too early to say, but Polisse by Maïwenn Le Besco, has to be a strong contender for the most awful film of the competition," suggests the Guardian's Peter Bradshaw. "All too often, the cast look like drama students put into some sort of group improv workshop and told to think themselves into the role of stressed cops. This means they shout at each other, and then they tell each other to calm down. Hey! HEY! Ta gueule! Calme-toi! Putain! CALME-TOI! … The ending is wildly unconvincing and melodramatic."

On the other hand, Karina Longworth, blogging for the Voice, is "not prepared to dismiss Poliss, a film crippled by its director/co-star's self-importance (the romance between Maiwenn's photographer and Joeystarr's hot-headed investigator seems to exist to amp up the filmmaker's own screen time), and marred by a ridiculous cross-cut 'shock' conclusion, but still an impressive feat of improvised ensemble performance and directing. And I don't think its humor is inadvertent at all — I would say that two-thirds of this self-reflexive study of sex crime investigators is an intentional In the Loop-style spoof on TV procedurals like Law and Order: SVU, and when it works, it's genuinely funny."

Update, 5/17: "[T]hough it doesn't dig as deep into the bigger-picture aspects of la belle France's thorny social issues as much as you'd like, it doesn't ignore them, either," writes Time Out New York's David Fear: "they're woven into the fabric in the least didactic manner possible, acknowledged as part of a system that's larger than one cop or one case. Only the ending, a cross-cutting marathon between on tragedy and one triumph, rings false. Everything else about Polisse works like gangbusters. I'm crossing my fingers that it gets a stateside release tout de suite."