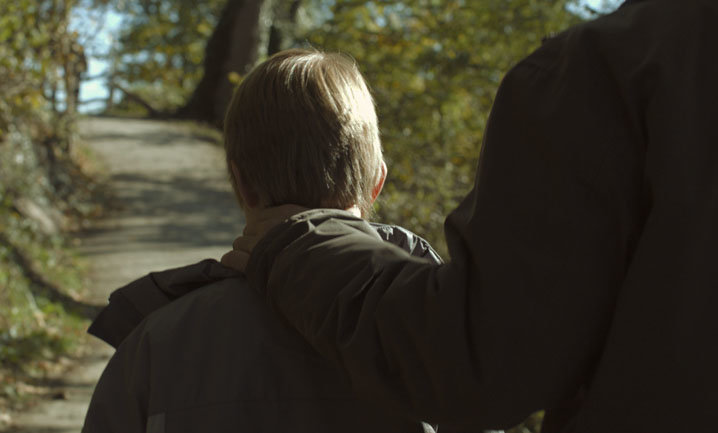 "Illustrating the banality of evil in an impressively controlled and sometimes darkly humorous fashion, Michael takes a coolly nonjudgmental, non-psychological approach to a disturbing topic, spending five months in the life of a 30-ish pedophile who keeps a 10-year-old boy locked in his basement," begins Alissa Simon in Variety. "Although it begins in medias res, Austrian writer-director Markus Schleinzer's feature debut slowly reels viewers in with Michael Fuith's strong lead performance, a creepy accumulation of ordinary detail and suspenseful twists."

"Although Schleinzer is a first-time director, he was the casting director for films including Michael Haneke's The Piano Teacher, Time of the Wolf, and The White Ribbon, for which he also coached the children," notes Barbara Scharres in the Chicago Sun-Times. Michael "often treats his victim as if he were a stern foster parent, making him help with chores, monitoring his TV time, and even taking him on the occasional outing, albeit with a firm hand at the back of the boy's neck. The first time Schleinzer provides a glimpse of the chilling reality, Michael is seen entering the prison room and closing the door behind him. In the next shot, he's upstairs at his bathroom sink, casually washing his penis…. Michael's emotionless precision is given no counterpoint in the larger milieu in which he operates. Schleinzer may or may not be making a larger statement about contemporary society, but at least half of his audience wasn't buying it."

"For my money," writes Mike D'Angelo at the AV Club, "a little such banality goes a long way — not because it's dull (it isn't), but because, in a strange way, it's easy, even timid — a means of shocking by refusing to shock, if that makes any sense. Still, it's hugely preferable to the repugnant tack Schleinzer takes in the film's lengthy epilogue, during which he begins actively and sadistically fucking with the audience, as if chastising us for our natural compassion. That was the point at which my neutral indifference (sole exception: a riveting scene in which Michael goes 'shopping' for another boy at a drag race) shaded into outright hatred."

The Hollywood Reporter's Kirk Honeycutt argues that the film "bravely tackles a subject most filmmakers would shun, then loses courage and fails to make any sense, either psychological or morally, of repugnant behavior." Schleinzer "bestows on his kidnapper/child predator Michael (morosely played by Michael Fuith) such human traits as smoking outside his house but not in, being remote but collegial at work, fastidiousness over having a clean house and so on. But then timidity overcomes the film. It never wants to look too closely at the evil Michael perpetrates or imagine what compels him to so desert moral principles. In other words, this human portrait lacks any inner life or uncontrollable impulses. Is he in anguish over his crimes or perfectly happy about them? You never know."

Allan Hunter has a different take in Screen: "Mercifully, Schleinzer spares us the gory details of the sexual relationship between man and boy. He merely allows us a sense of what is happening especially in an unsettling moment when a lustful Michael lounges on a bed staring in anticipation at his quarry. The performances are both commendable in their restraint and plausibility. David Rauchenberger is especially impressive at suggesting the vulnerability and steeliness of David. His downward glances and the way he flinches at every touch from his captor makes us attuned to his suffering in a way that makes anything more graphic superfluous."

"When he recovers from a life-threatening injury or risks the discovery of his basement activities by a nosey co-worker, Schleinzer toys with audience expectations of a clean happy ending, but he avoids exploiting it," writes indieWIRE's Eric Kohn. "Michael is not an object of pity, but Schleinzer still makes his monster familiar, which is a much creepier prospect."

"Throughout the film, Schleinzer plays on his audience's expectations, leading them down false paths and littering clues about the context of the crime and its implications on the life of the main character." Domenico La Porta for Cineuropa: "He is not presented as a particularly monstrous or friendly man, but the audience is kept distanced from his intentions, which are slowly and skilfully revealed [in] the astonishing conclusion."

The press conference. More listening (11'15"): The Film Society of Lincoln Center's Gavin Smith and Scott Foundas discuss what they consider to be the best films of the Festival so far — and Michael's definitely one of them.

Updates, 5/17: For Time Out New York's David Fear, "though it's an easy film to admire, it's a damned hard film to like."

"The freshman director's control of the medium is impressive," writes Guy Lodge at In Contention, but "an original voice isn't much in evidence, as the film's most arresting jolts of technique feel lifted from a national cinema not short on chilly precision. (As unkind as it may be to call a film about a stereotypically milky-eyed paedo 'quintessentially Austrian,' that's what it is.) Schleinzer rather assumes that the shocking subject matter is a statement in itself, but we learn little about what makes men like Michael tick, even as the curbing of his victim's perspective keeps us ickily complicit in his activities, down to a capital-A Ambiguous denouement that isn't quite as courageous as it would like to think."

Update, 5/23: Writing for the London Review of Books, Jonathan Romney finds Michael "uncomfortable rather than agonizing to watch, and Michael Fuith, playing the paedophile, achieved a major feat in making his character not only loathsome but also mesmerisingly dull."