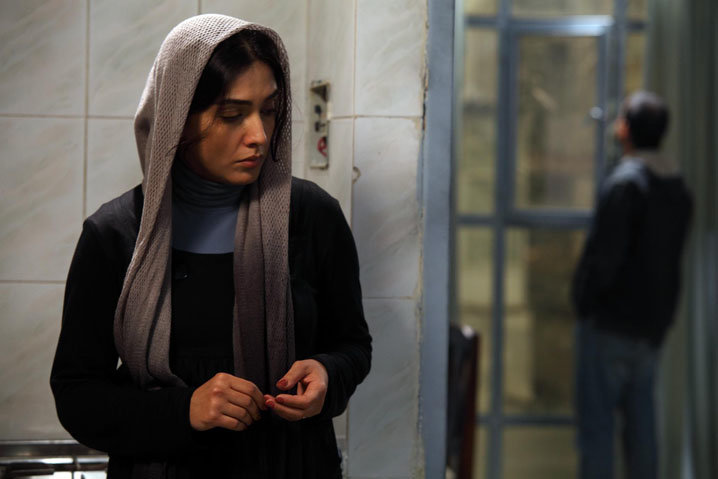 "The political and social tension surrounding the recent imprisonment of Mohammad Rasoulof will inevitably influence the way his most recent film, Good Bye, is received at Cannes," writes Glenn Heath Jr at the House Next Door. "A late addition to the festival's lineup, along with fellow political prisoner Jafar Panahi's This Is Not a Film, Good Bye unassumingly drops the viewer into the center of Tehran, where a beautiful young lawyer (Lelya Zareh) ideologically lives between a rock and hard place. Recently disbarred for participating in activist campaigns against the government, the woman happens to be pregnant and alone, her husband exiled to work in the desert because of his role as a political journalist. Fed up with Iran, she has decided to leave, aided by an off-the-books immigration specialist (Iran's version of a coyote) who we see only once."

"Through the routine of Noora's life, Rasoulof details the abundant threats to freedom that plague the average citizen," writes Barbara Scharres for the Chicago Sun-Times. "[H]er satellite dish is taken away because satellite TV is illegal in Iran; as a woman, she cannot undertake a whole range of medical procedures, or even check into a hotel, without her husband's permission. Rasoulof also depicts the specific terrors that attend anyone who is seen by the regime as a dissident. The scene in which two plain-clothes police ambush Noora in the tiny elevator of her apartment building and interrogate her as they keep the car in motion is a standout example. Good Bye is filmed in muted colors. Rasoulof's frame compositions are elegant but convey a deadly, sleepwalking calm. A pet turtle becomes a metaphor for Nora's situation as it circles and paws the slippery sides of a plastic tray, unable to get a foothold to get out. One day the turtle disappears."

"Visually, and in its rich sound design, the film betrays none of the presumably difficult conditions of the shoot," notes Lee Marshall in Screen. "[I]t's a fully-formed contemporary screen tragedy, and a worthy addition to an oeuvre that includes two much more allusively allegorical films about Iran, The White Meadows (2009) and Iron Island (2005). But Good Bye is also a slow-moving and rather bleak film that demands a certain resilience of its audience. A couple of days before the film's Cannes premiere (the film was a surprise late addition to Un Certain Regard), it was announced that Fortissimo would be partnering with Pretty Pictures on sales, with Pretty Pictures releasing in France and Fortissimo handling the rest of the world."

"Building up a sinister atmosphere, Rasoulof shows the trap"inexorably tightening around his heroine, portrayed as a portrait of anguish by the glacial Zareh," writes Deborah Young in the Hollywood Reporter. "The film's pace is too leisurely to keep tension mounting, however, and rigorous re-editing could do much to tighten the story and clear up some early plot points that get lost in translation."

"The movie's stillness and quiet are close to funereal," blogs the Boston Globe's Wesley Morris. "Rasoulof limits himself to a handful od cameras angles. Every closed door bring a thunderous rumble. And, in the most cruelly ironic of production choices, the terrace of his heroine's home, overlooks an airport runway. It's a stinging work of art and an allegory of a nightmare: Everyone's in a prison."

Updates, 5/17: "Rasoulof renders the daily suspense of living in a society plagued by repression with remarkable intimacy," writes indieWIRE's Eric Kohn. "It's no wonder that Iranian forces consider him a threat, but its citizens should view this movie's miraculous last-minute arrival at Cannes as a kind of dark blessing."

For Time Out New York's David Fear, Good Bye is "easily one of the best things I've seen at the fest, and the joy of seeing such a strong work here is only offset by the depressing fact that this gesture of dissent is being screened without its creator present."

For Simon Abrams, dispatching to the L, Good Bye "nicely complements The White Meadows, which is an astounding imagistic fable about life in a theocracy. That said, this film, about a pregnant lawyer facing political persecution, is much too literal and pat."

Here in The Notebook, Daniel Kasman finds Good Bye "cloaked and variably choked by both the clandestine nature of the film's production and the hushed and desolate story it tells."

Update, 5/21: "Where Panahi's work is ironic and personal, and [Asghar] Farhadi's is naturalistic and full of life, Rasoulof's film is defined by eerie, deceptive calm," writes Livia Bloom for Filmmaker.