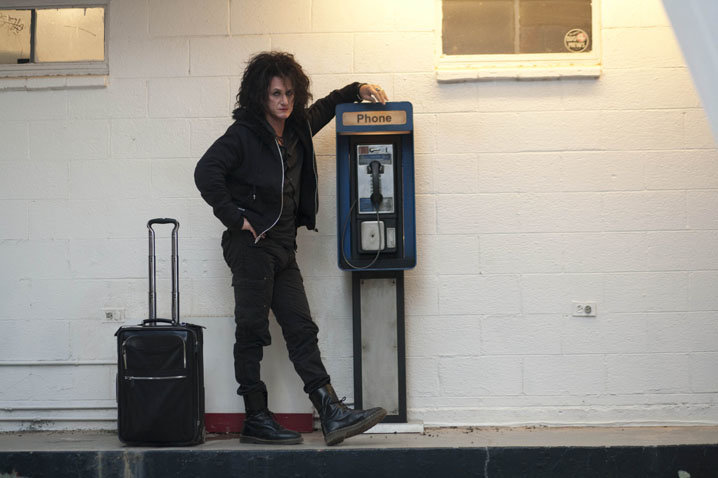 Paolo Sorrentino's This Must Be the Place "stars Sean Penn — an amalgam of Dorothy Michaels from Tootsie, the Cure's Robert Smith, and the titular mentally challenged man the actor played in I Am Sam — as Cheyenne, a fey, retired goth rock star who leaves his home in Ireland to return to the US to track down the man who tormented his estranged father in Auschwitz. Unbearably sentimental — one colleague likened it to this year's Life Is Beautiful — and consistently ridiculous, Sorrentino's movie was inexplicably met with warm applause (and, as far as I could tell, no boos). There's no arguing taste (or cultural differences or festival exhaustion), but figuring out the appeal of a film that includes a Holocaust slide show, Penn's aggressive scenery chewing ('Not having kids has really, really screwed me over!' he weeps at one point), and every lazy American stereotype (fatties, guns, tattooed hillbillies) will remain forever beyond my ken."

"For his technique, ambition and reach, 40-year-old Italian director Paolo Sorrentino is justifiably considered an emerging master of modern cinema, crucially nurtured here at Cannes," writes the Guardian's Peter Bradshaw. This new film "has superbly elegant and distinctive forms: looming camera movements, bursts of pop, deadpan comedy, quasi-hallucinatory perspective lines in landscapes in which singular figures look vulnerably isolated. There's an awful lot to enjoy here and yet I couldn't help feeling that… the film becomes derivative and Wim Wenders-ish. And a final twist-reveal gestures at some kind of equivalence between the suffering of Jews and their Nazi captors. Now, perhaps it's the lingering unease that Lars von Trier has left behind him here at the festival, but I found that a slightly uncomfortable conceit." And by the way: "Cheyenne's American odyssey reaches its peak with a wonderful cameo from David Byrne, who plays 'This Must Be the Place' in concert and has a great scene with Penn. Getting Byrne in front of the camera was clearly a labor of pure fan-love for Sorrentino."

The issue here "has nothing to do with whether it makes light of the Holocaust," argues indieWIRE's Eric Kohn. "That might be a worthy debate if it didn't face other problems. Chief among them: An uber-campy Sean Penn performance, a gratingly quirky soul-searching plot, and character motives that barely make any sense. It's far too much of a godawful mess to merit serious moral scrutiny."

Writing for the Playlist, James Rocchi admits that he'd been expecting a disaster and now finds it "somewhat sad to report, then, that Sorrentino's film is not nearly as bad as one might fear, or, alternately, one might hope. A rambling, ragged road-trip shaggy dog story, it starts with Penn's aging rocker Cheyenne puttering about his country estate in Ireland — dazed and confused, going down to the market to shop and blurting out sentence fragments like 'Why is Lady Gaga?' Cheyenne is supported by his loving and patient wife of 35 years (Frances McDormand, plucky and implausible) and friends with the gothically-styled Mary (Eve Hewson)…. Sorrentino's very title suggests someone who doesn't have the most well-defined sense of where they ultimately want to wind up; as goes the Talking Heads song, so goes the movie."

"I admire what Sorrentino and Penn are trying to accomplish with This Must Be the Place, especially in the visually inventive early moments set in New York City," writes Glenn Heath Jr at the House Next Door. "But the narrative is so flimsy and dialogue beyond allegorical that it's hard to take any of Cheyenne's arc completely seriously. Even when the conversations between Cheyenne and a cross-section of American personalities signify nothing other than tangential ideas, there's a sentimental undercurrent that is particularly worrisome. This single-mindedness comes to a head in the film's final sequence of retribution."

"This Must Be The Place is wry and sometimes affecting," finds Time Out London's Dave Calhoun, "but it has a sluggish momentum compared to the Fellini-esque, cutting musical carnival of Sorrentino's terrific last film, Il Divo…. It's always a curious and imaginative film. Penn is fun to watch and Sorrentino is a bold storyteller, unafraid of diversions in story and tone – Harry Dean Stanton has a great cameo in one scene as a guy who claims to have invented the suitcase with wheels. But the momentum of the film stops and starts and you feel you know less, not more, about Cheyenne as time goes on and his behavior becomes less convincing."

Grades are way down low at Micropsia.

Updates: "It's a mystery why Sorrentino would think of mashing Velvet Goldmine, Easy Rider and Music Box into one movie, but, bless him, he tried, and came within one unfortunate casting decision of succeeding," writes Mary Corliss for Time. "In The Consequences of Love (2004) and A Friend of the Family (2006), both shown at Cannes, Sorrentino lent an elegant visual wit to stories of malificent Italians of the small-town variety. Somehow he burrowed into the vocal and emotional styles of his Irish and American characters here. No line sounds false; each passing figure feels fully inhabited. Joyce Van Patten and Kerry Condon shine as Lange's wife and daughter… The only problem is Penn, looking suitably withered but speaking in a wispy voice that evokes both Tiny Tim and Droopy Dog. Radiating the aura less of a rock star than of something found under a rock, Penn is never Cheyenne, always Sean Penn playing Cheyenne."

Nick James, writing for the Telegraph, finds rather likes this "quietly charming oddball road movie… Beguiling performances abound and the director's taste for extremely beautiful composition is very much to the fore. Given the Lars von Trier scandal, some might disapprove of the film's use of the holocaust as a motivational event in such a light context, but I did not find it distasteful. Indeed the film shows that Sorrentino — who first met Sean Penn on the jury here two years ago — can ply his trade to great effect wherever he likes."

For Variety's Jay Weissberg, this is "a film that brims with warmth, humanity and respect in ways one doesn't often find in the work of coolmeisters like David Lynch and Quentin Tarantino…. Though not a dime of Stateside coin is involved, this is very much a patchwork quilt of Americana reflecting the helmer's engagement, in ways both positive and negative, with the country and its mythology. It's also that rare film directed by a non-American that gets not just the locales but also the cadence of the language absolutely right, with a script full of great lines and images of lingering beauty."

Updates, 5/21: For Mike D'Angelo, writing at the AV Club, "the glory of this movie is that it isn't really about its crazy plot, or even its ludicrous protagonist (in whom Penn, alternately restrained and manic, locates a lovely undercurrent of melancholy). 'We'll get to that,' a random character played by Harry Dean Stanton tells Cheyenne twice in about 30 seconds, regarding two completely different subjects, and the phrase amounts to a credo of sorts; it's a film about digression as epiphany, shot in a style that makes it seem as if Sorrentino is reinventing the world every few minutes."

Movieline's Stephanie Zacharek finds this to be "a picture so ill-conceived and so bizarrely executed that watching it, I wondered if nine days (and counting) of nonstop movies had finally pitched me right over the edge of sanity?… This Must Be the Place is supposedly something of a comedy, albeit one that includes a death-camp slide show and some very weird ideas about what the relationships between concentration-camp guards and their prisoners must have been like. (I doubt many of them became pen-pals after the fact, but believe it or not, that's what happens here.)" All in all, "a bewildering piece of work, a picture that may have initially been guided by a sweet impulse but takes a sharp left turn into crazytown."

"This is rather obviously intended to be a coming-of-age film, with all the trappings of a Nazi hunt as window dressing." Barbara Scharres for the Chicago Sun-Times: "Early in the film, another character remarks to non-smoker Cheyenne that only children don't feel the urge to smoke. After he has reached the end of the road with his quest, a stranger at the airport offers him a cigarette, and he oh-so-significantly lights up."

For Adam Woodward, writing at Little White Lies, this is "is a scattershot, disengaging meander of a movie that suffers from its own impulsiveness." In Screen, Lee Marshall argues that "for all its theatre of the absurd and occasionally cheap laughs, the film carries a surprising emotional heft."

Updates, 5/23: For the Film Society of Lincoln Center's Scott Foundas, "it's no real surprise that, in a festival where the vast majority of films inside and outside of the main competition have focused on humanity at its worst—kidnapping, child abuse, murder — or the very end of the world itself, Sorrentino's aggressively life-affirming movie has wormed its way into the hearts of a surprising number of usually sensible, discerning critics. And one doubts it's over yet. Without question, this pablum masquerading as 'sophisticated' adult entertainment is one of the canniest movies in Cannes this year."

"Penn has the confidence and seriousness to tell us this is a Journey of Discovery, but the movie is so vague and light that the inevitable confrontation is heavier than that lightness can handle," writes the Boston Globe's Wesley Morris. "It's like watching a bowling ball rip through a paper bag."