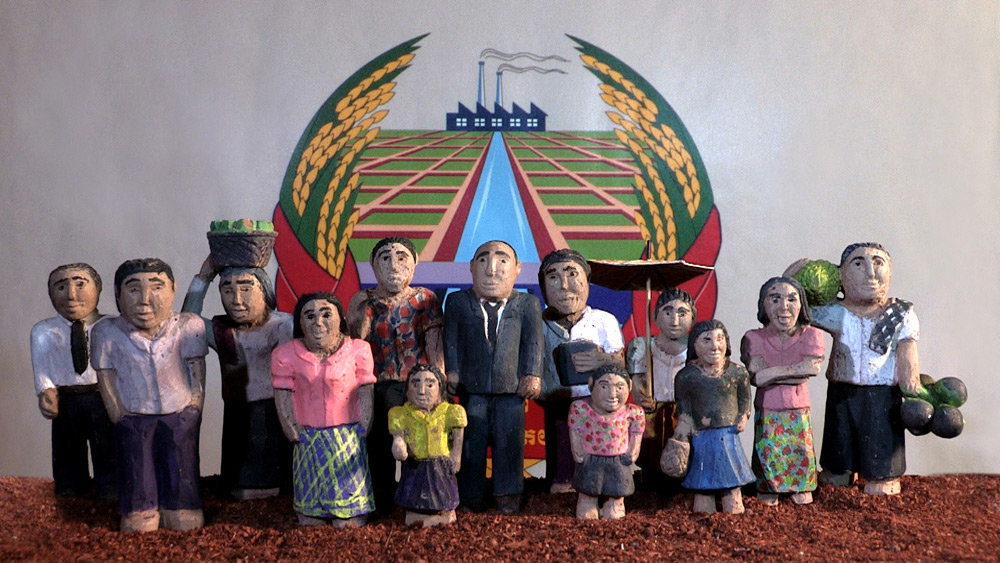 The festival's second pointedly inventive autobiography has none of the dark whimsy of the Jodorowsky, trading it instead for a grave retelling of Rithy Panh's childhood in Cambodia under the Khmer Rouge. A recreation of the era and Panh's personal anecdotes is accomplished through the creation of countless clay figures—carved and painted, we see, by hand, out of “earth and water”—staged in static scenes through which the camera moves and the director cuts. They fill in a gap, the missing image of the title: a missing photographic record of the human experience of the horror and oppression behind the government's official ideology. (An image not missing: the official image, the propaganda image, that of Cambodian films of the time.) Panh's narration with moving straightforwardness segues between historical recount, deeply personal recollections, and broader criticism, illustrated by the savagely naïve and thereby at once terrifying and sweet figures of his clay populace, each working, living, starving, dying in unalterable repose. Some are laid over documentary film footage, creating historical scenes—like the mass exodus out of Phnom Phen—that apparently have little, if any, visual record. Others' colorful sculptural presence of existences eked out, carven-frozen in a solidarity of misery, are contrasted against official moving images of Pol Pot's official visits and speeches. Pahn begins the film saying that upon reaching his middle age he has returned to his childhood, and so he does not just in recollections of his boyhood but in the toy-like imagining of those recollections. Their primitive form suggests, as does the ellipses in Panh's storytelling, where it feels like eons pass in what must only be a few seasons or years, a work in progress to discover records of an era held mostly in memory. Or, if discovery is impossible—the film opens with horrifically warped and brittle old film prints being removed from rusty tins–than the calling of a new effort to create new images, personally, with which both to share a vision of the recollections, and to forever mark what is missing.