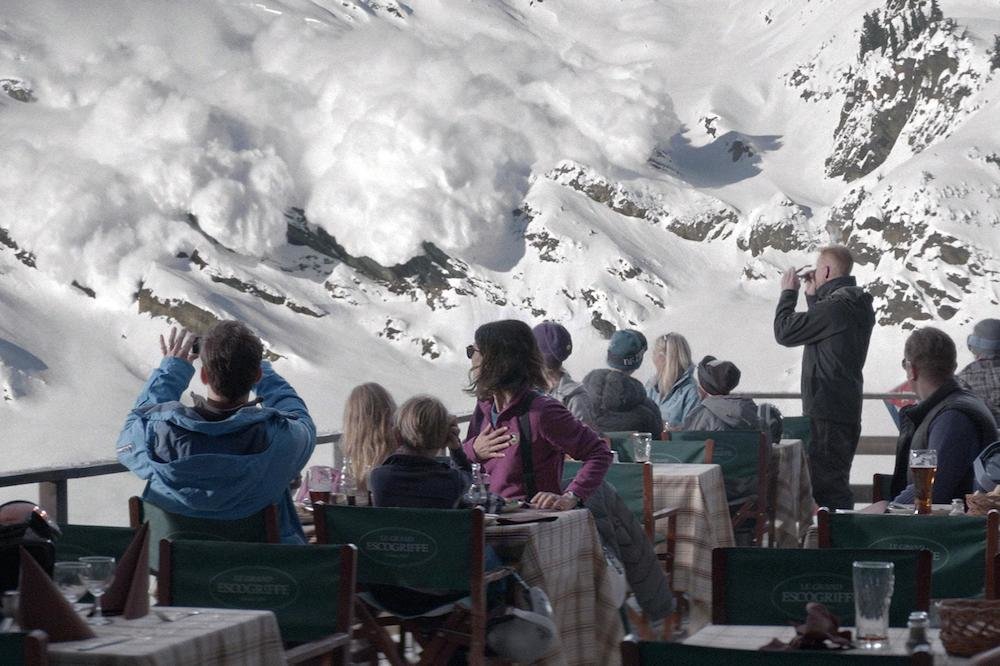 ﻿Ruben Östlund's Play was the last film I saw in Cannes in 2011, and I found it startling. The Swedish filmmaker has ping ponged a bit around Cannes; his second feature, Involuntary, was in 2009's Un Certain Regard; and Play was programmed in and sang through the Quinzaine des Réalisateurs, a section still trying to find its identity and acuteness after the departure of Olivier Père. Östlund's newest film, Force Majeure (also known as Turist), brings him back to Un Certain Regard, but the film is so assured and of such an impactful scope that it seems an insult to keep it out of Competition. Problematic as the movie may be, it reveals Östlund as one of the major international filmmakers.

The premise we have seen before. In fact, just a few years ago Julia Loktev's The Loneliest Planet also imagined a couple on spectacular vacation during which a small violent event occurs and the man disappoints the woman in his impulsive cowardliness, catalyzing the emotional fallout to follow. Here the location is the Swiss Alps, a far more concrete setting than The Loneliest Planet's abstract Georgian hillscapes, and the event a controlled avalanche which seems, momentarily, to go out of control and threaten the lives of a vacationing family. This is on the second day of their trip. The husband flees; the wife stays to protect their children. Over the rest of the vacation week the two unexpectedly have to revaluate their senses of self, each other, their marriage, and so on. Yes, okay, that's all fine, a bit of a gimmick, a fine starting place. But these Alps, man.

The outdoors of Force Majeure exist on a level of breathtaking scale, blindingly white with vivid, colored blotches of skiers and the slope's strange machinery of transport and snow conditioning standing like alien installations. This isolated, hovering snowtop playground is so visually fresh it nearly appears as if such things have never been photographed before. One wishes to watch it in IMAX, in 3D, in Cinerama.

But it's not just an immense vastness, a breathtaking angle on the nearly forgotten awe of the mountain film, the slow, graceful strangeness of all snowbound movement; with the spectacular event of the avalanche, Östlund makes this inhuman outdoor space a metaphysical one of existential precariousness. This great white outdoors is rendered strange, omnipotent, unconcerned with humanity but deeply impactful. Inside, cozy and warm, the outside is discussed—for anything out there could change the lives of those inside forever.

This continues Play's concept of vulnerable spaces and makes it more sophisticated, taking it beyond use of the frame—though several single shot scenes cleverly toy with on-and-off frame suspense, as in that film—and expanding it into the greater mise en scène. The constant off-screen thunder claps—the resort's controlled avalanches—chide the married couple, and us, that such a thing as the revelation of this one man's momentary cowardice and one family's fear could happen and is happening constantly. Once the traumatic event has occurred, once the rift has been created, they each question their presumptions about the normalcy not just of their lives but of the reality in which they live them.

The film's exacting compositions and irony-courting direction—where many shots or scenes play on the audience's extra awareness of things the characters don't know, putting us in a place of superiority to the humans on display—could be browbeatingly dour and serious. But Östlund is too clever for that, and nearly makes a comedy, or at least quasi-comedy, out of his melodrama. He counterbalances his central, traumatized couple with a “joke” one—signaled by the other man's tremendous, hilarious red beard—that becomes an audience to the shaken couple's tale of the avalanche and respond with hilarious awkwardness. This other couple's relationship is in turn destabilized by the tale of the avalanche, but played for laughs, whereas the original couple's ordeal is primarily serious, if somewhat patronized by the all-seeing, all-knowing director.

Indeed, while Force Majeure has a supreme mastery of form and control of audience and subject to make it a calling card for this immensely smart and talented filmmaker, the nature of its form takes uncomfortable liberties with the audience's superiority to what amounts nearly, as with Play, to a formal cinematic experiment carried out before our eyes. Knowingness and the unknown for both the characters in the film and the viewers watching the film is a critical aspect of the director's last two movies, which can lead into dangerous territory of expensing the human and spiritual subjects for the sake of a successfully enacted and communicated experiment upon them. To be honest, in these two films I'm not sure it's possible to separate the aspects, as what makes Östlund a special filmmaker seems also to be the same thing which inspires in me this uncomfortableness. But then we get a sequence like the final one in Force Majeure, which in typical fashion of this kind of somewhat-didactic cinema functions as an epigrammatic ending punctation point. It combines the inside and outside spaces the film has kept separate for so long and nearly plunges us, literally, into a fearful, vertiginous vision that no space is safe.