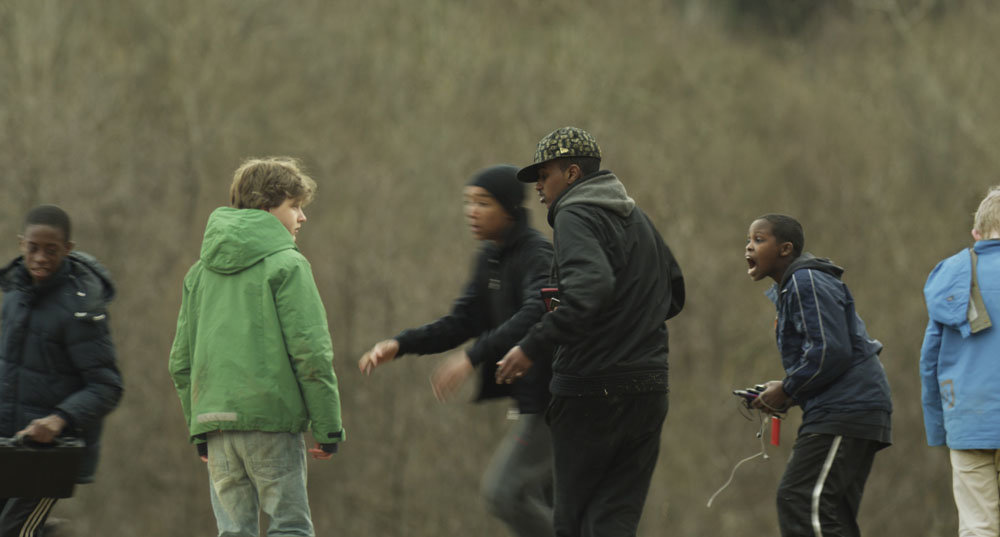 "While occasionally more plodding than playful, Ruben Östlund's ingenious foray into conceptual cinema succeeds in both skewering the pretensions of seemingly liberal and tolerant Swedes and challenging the audience's own preconceptions," writes Richard Porton in Cinema Scope. "Inspired by an actual incident in Gothenburg, Sweden's second-largest city, Östlund casts a harsh, and frequently funny, light on Scandinavian racial tensions by focusing on the efforts of some clever kids of African origin to swindle younger, wealthier schoolchildren through sheer force of will instead of violence. Even though their victims have ample opportunities to escape or fight back when threatened with the loss of their wallets and cell phones, the African kids hold the upper hand because their well-heeled prey are intimidated by both the race of the scam artists and their own liberal conditioning."

"What's the line between a provocative, no-holds-barred drama about race relations and a straight-up racist film?" asks Noel Murray at the AV Club. "It's bold, no doubt, and it'll certainly get the viewer thinking about his or her own presumptions about race. But the deck here is way too stacked. Östlund and his superb young cast achieve an unforced naturalism, but the scenes follow more or less the same direction time after time, with the blacks bullying the non-blacks and the latter going along, even though there's rarely any immediate threat. Is this meant to be a critique of political correctness run amok… or is Östlund just trying to push buttons?"

"Play certainly fits the bill as a meticulously constructed right-wing fantasy," argues Michael Sicinski at Cargo. It's "the perfect tonic for anyone who has ever decried a Haneke or von Trier film as reactionary claptrap. It's the real deal."

"While obviously indebted to the great Code Unknown in its dispassionate depiction of casual urban cruelty (as well as in its classroom-presentation coda), Play is less disjointed and more immersive in its clear focus on a single narrative strand," writes Michał Oleszczyk for Fandor. "Coolly orchestrated into a series of tour-de-force long takes (many of which employ a heavy dose of perfectly applied zoom-shifting), the film manages to do without a single instance of traditional shot/reverse-shot editing…. The handling of physical space is masterful throughout, as the focus shifts from pointedly windowless interiors (often rendered in ultra-dense shots, overlaid with multiple lines and reflections) to the wide open spaces of Gotheborg's outskirts."

Earlier: Daniel Kasman praises the film from Cannes: "The film's supremely formal approach to exploring a social and psychological phenomena of extreme, fascinating dynamism, all within a restrained, almost muffled, documentary context of the transportation and interstitial spaces of Gothenberg, make it a remarkable discovery of cinema.﻿"

Updates: "By the time Play arrived at NYFF, I'd heard from a conservative that it was a trenchant condemnation of the irrational PC-ization of speech and from a committed Marxist that it was fascist," writes Vadim Rizov for the L. "Now. Maybe, intent doesn't matter. Maybe the presentation of police files on-screen, without comment, is enough; just like in United 93, in 20 years, this'll play more interestingly and less unnervingly. As it stands, Play covers its rhetorical ass from every direction. This is fair: no less eloquent a film than Do the Right Thing is careful to apportion blame to everyone who escalates the situation, deliberately obfuscating potential charges of race-baiting either way. For all I know, Play is meant in the same spirit… But this movie bothers me, and maybe not in ways it's supposed to."

Michael J Anderson finds it "disquieting is that Play may just represent the future of both European cinema and the continent itself."﻿

Update, 10/16: "Ruben Östlund's moral tale is the boldest formal experiment in the main slate at this year's New York Film Festival, a trait matched in force only by the confusion of its politics," argues Phil Coldiron in Slant.﻿