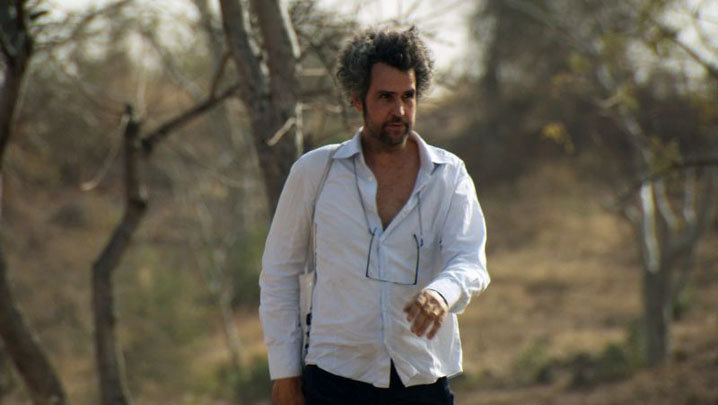 "Christoph Schlingensief, one of Germany's best film and theater directors and writers is no more," announces Grey Daisies here in the Forum, where some of the first remembrances from other MUBI members follow.

The German Press Agency's first report in English is still a work in progress, but the Wikipedia entry and Schlingensief's own site (whose server seems understandably overloaded at the moment) are fine places to begin for those unfamiliar with his work. Wikipedia: "As a young man he organized art 'events' in the cellar of his parents house and artists such as Helge Schneider or Theo Jörgensmann performed in his early films. Schlingensief considered himself a 'provocatively thoughtful' artist. He created numerous controversial and provocative theatre pieces as well as films, his former mentor being filmmaker and media artist Werner Nekes. One of his main works, the so-called Germany-Trilogy, which deals with three turning points in 20th century German history: the first movie Hundert Jahre Adolf Hitler (Adolf Hitler - A Hundred Years) covers the last hours of Adolf Hitler, the second Das deutsche Kettensägenmassaker (The German Chainsaw-Massacre), depicts the German reunification of 1989 and shows a group of East-Germans who cross the border to visit West-Germany and get slaughtered by a psychopathic family with chainsaws, and the third Terror 2000 uses the theme of the 1970s Red Army Faction terror. His films have been compared to Hans-Jürgen Syberberg's film, Hitler, A Film from Germany."

All that said, Schlingensief has primarily been known for his installations, his work in theater and opera (mentioned most often today is his Parsifal for the Bayreuther Festspiele in 2004) and for the rapid wit he displayed in his frequent appearances on German talk shows. The legacy for which he'd surely most like to be remembered is the Festspielhaus Afrika he built in Burkina Faso.

Cargo's posted video of a lively moment in his career; and he appears on the cover of the current issue of Spex and today, Max Dax, who interviewed him for the magazine, posts a short tribute (in German).

Spiegel Online has translated its obituary: "Elfriede Jelinek, the Austrian recipient of the 2004 Nobel prize for literature, described the director as 'one of the greatest artists that ever lived.' In The German Chainsaw Massacre, "news of the fall of the Berlin Wall sparks an unrestrained and bloodthirsty frenzy by a West German family of butchers, who murder countless East Germans. The film attained cult status. 'It calls Helmut Kohl's reunification to account and is a successful answer to the boredom of German film,' wrote the Süddeutsche Zeitung daily.... This week Schlingensief's dramatic premonition about his own illness is being quoted over and over again. While he was working on his staging of Wagner's Parsifal, in Bayreuth, the work he staged there controversially in 2004, he told the press that the process would give him cancer. Discussing this in an interview with Spiegel in 2008, Schlingensief said: 'Everyone who has cancer asks himself questions like that. Some brood over whether they smoked too many cigarettes or drank too much red wine. I ask myself whether I felt too much of an affiliation with death in my art.'"

Update, 8/24: "So Schön wie Hier Kanns im Himmel gar Nicht Sein! (Heaven Cannot Be As Beautiful As Here), a diary of his illness, in which he described his hope, desperation and bitter wrangling with God, was published in the summer of 2009," writes Hugh Rorrison in the Guardian. "He could hear, he claimed, what people were saying about him: Schlingensief the wild man, the provocateur, the enfant terrible, now with this mad, manic desire to survive, fighting with a superhuman effort until his last breath. Schlingensief was a talented, energetic maverick, often working on several projects at the same time: films, theatre, opera, blogs, interviews, prose, art actions, videos. By the end of his life he was considered one of the most influential figures in the German theatre and something of a national treasure. He had been commissioned to decorate the German pavilion at the Venice Biennale in 2011." Further down that same page, Michael Buergermeister adds, "His humour was cheeky, irreverent, subversive and most definitely not politically correct. It was also the key to his art."

Update, 8/25: William Grimes in the New York Times: "'Schlingensief was a hugely influential artist in Germany,' Tara Forrest, an editor of Christoph Schlingensief: Art Without Borders, recently published by the University of Chicago Press, wrote in an e-mail message. His work, she said, 'encouraged the audience to think critically and creatively about issues like immigration, unemployment, homelessness, the rights of disabled people and the Nazi legacy in contemporary Germany.'... Reviewing Terror 2000 for The New York Times, Stephen Holden wrote: 'If a Keystone Kops film were written by William S Burroughs, peopled with characters from George Grosz by way of Russ Meyer and directed in a style that suggests Jean-Luc Godard on speed, you would have a movie with the style and mood of Terror 2000.'"