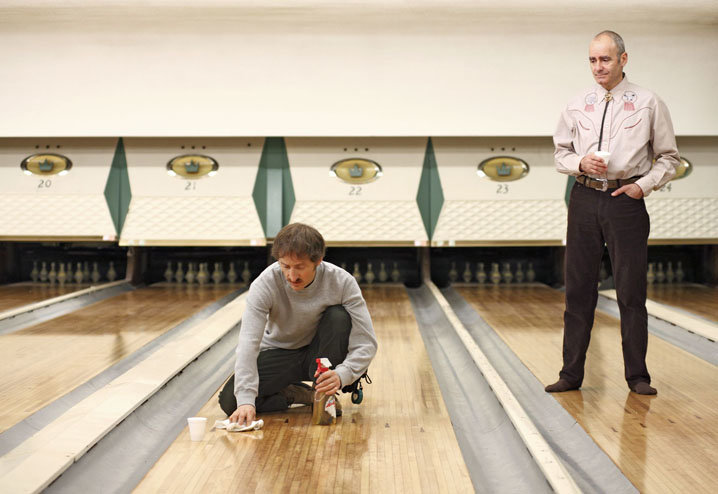 Jason Anderson introduces his interview with Denis Côté, the cover feature in the latest issue of Cinema Scope: "Remarkably productive given the soul-crushing circumstances of the Canadian film industry for established filmmakers and newcomers alike, Côté has made five features and several shorts since 2005. Two best-director wins at Locarno (including one for Curling), the appearance of last year's superb Carcasses at the Directors' Fortnight at Cannes, and this year's Les lignes ennemies, shot for the omnibus Jeonju Digital Project, have established him as perhaps the best-travelled of young Canadian filmmakers. (His first career retrospective will take place at the upcoming Viennale.) Thanks to the often confrontational nature of his tough, frankly intimate dramas Les états nordiques (2005) and Nos vies privées (2007) and the uncategorizable weirdness of Carcasses, Côté's films have proven to be a better fit with adventurous festival programmers than those of most of his contemporaries.... A moving and often mysterious portrait of a family in transition, Curling may widen his base of support in Canada.... Haunting, humane, a bit mysterious, and often very funny, Curling succeeds as a story of two characters whose escape routes from despair are as idiosyncratic as they are."

Adam Nayman interviews Daniel Cockburn, whose You Are Here is a "meta-detective story" whose "textures, fragmented structure and air of creeping, unnameable anxiety speak to the contemporary moment, even as the filmmaker goes out of his way to elide contemporary signifiers."

You probably didn't see this interview coming. Christoph Huber: "How to do justice to a man whose office is adorned with both a certificate from the International Arm Wrestling Council, commending the auteur of Over the Top (1987) that reads 'In appreciation of your valued support for the sport of arm-wrestling,' and the famous napkin on which Golan and Jean-Luc Godard signed a million-dollar-contract for King Lear (1987) during their 1985 lunch meeting in a Cannes restaurant? Personally, I'd rather make a bid for the arm-wrestling certificate, but in a 1997 interview Golan claimed he turned down a $10,000 offer from MoMA for the napkin. These items represent, in a nutshell, the legend of Menahem Golan, cinema-obsessed producer-director-writer-huckster, most (in)famous for his decade-long reign — with cousin and partner Yoram Globus — over The Cannon Group, Inc, an enterprise that in many ways defined the cinema of the 80s, down to the metallic sheen of their logo." Which, of course, is associated with "trashy exploitation," but there are the "prestige productions" as well. Among those listed here: John Cassavetes's Love Streams (1984), Andrei Konchalovski's Runaway Train (1986) and Shy People (1987), Robert Altman's Fool for Love (1985), Franco Zeffirelli's Otello (1986) and Barbet Schroeder's Barfly (1987).

And finally, editor Mark Peranson recommends ten films "I've seen that will be heading your way that Cinema Scope has not yet covered in detail in this calendar year. Note, there are only nine, as I can't think of ten."

The Zurich Film Festival opens today with Michael Steiner's Sennentuntschi and closes on October 3 with Oliver Stone's Wall Street: Money Never Sleeps. Organizers will likely be hoping for a less eventful edition this year, at least in terms of what's not up on its screens. Many heard of the festival for the first time last year when Roman Polanski, arriving to pick up a lifetime achievement award, was promptly arrested by Swiss authorities and held in a chalet for ten months before they finally decided not to extradite him to the US. It should be stressed, of course, that the festival protested the arrest.

Blood into Gold: The Cinematic Alchemy of Alejandro Jodorowsky showcases "the complete body of film work as a core component to a series exploring the broad influence of this groundbreaking auteur." The series at the Museum of Arts and Design in New York opens this evening, runs through October 8 and features a master class with Jodorowsky on Saturday. 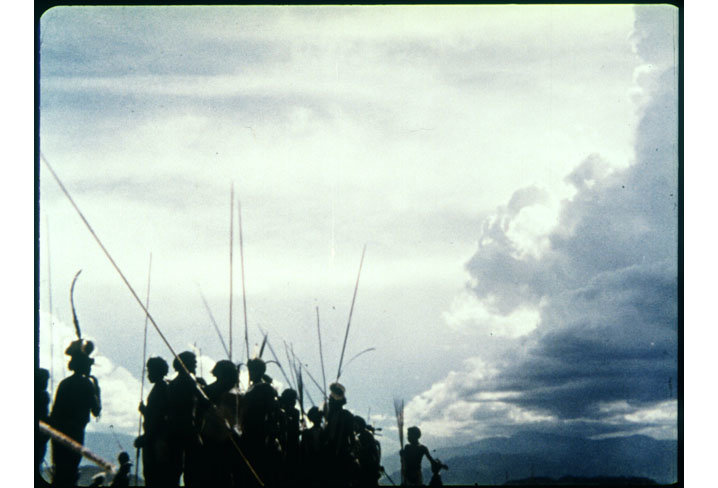 Max Goldberg in the San Francisco Bay Guardian: "Alternatively hailed as a sensitive cine-poet and derided as a brazenly ethnocentric pseudo-anthropologist cloaking shoddy fieldwork with mystification, Robert Gardner remains a controversial figure — when he is remembered at all. With a younger generation of filmmakers (Lisandro Alonso, Apichatpong Weerasethakul, Ben Russell, Claire Denis) rewiring the tropes of sensory ethnography to their own ends, the troubling beauty of Gardner's work seems freshly relevant if no less problematic. Yerba Buena Center for the Arts opens this Pandora's box the right way, with restored 35mm prints of three of Gardner's best known works." Others/Ourselves: The Cinema of Robert Gardner is on for a week beginning today. Image above: Dead Birds (1964).

Seattle's SIFF Cinema presents its Festival of New Spanish Cinema today through Sunday. In the Stranger, Charles Mudede notes that, "despite being generally good, none of the films in this series really stands out. None is exceptional; all were made with enough creativity to place them in an area just above average and just below greatness."

And for Sight & Sound, Mark Cousins looks back on the best of Telluride 2010.