Cristina Bercovitz has directed a short on the making of the soundtrack for Rodney Ascher's Room 237, a documentary about the plethora of theories that have sprung up over the years regarding just what Stanley Kubrick was up to when he made The Shining (1980). From the description posted at YouTube: "Kubrick's film was scored in large part with pre existing classical recordings, but the score for Room 237 has taken as its inspiration the elegant but quirky film music that accompanied low budget horror movies in the 1970s. Composers Jonathan Snipes and William Hutson utilize a combination of vintage and contemporary analogue synthesizers, as well as acoustic instruments to create an atmosphere that is at once both haunting and funky."

When they set out to make Room 237, which premiered at Sundance on Monday, Ascher and producer Tim Kirk "stumbled upon… a subculture of Kubrick fans that has been expanding over the last several years," reports Robert Ito for the New York Times. "The group includes professors and historians, fanboys and artists, many of whom have posted their theories online accompanied by maps, videos, and pages-long explications pleading their cases. The Liverpudlian filmmaker Rob Ager's video analyses of The Shining have garnered hundreds of thousands of YouTube hits; the voluminous online essays of Kevin McLeod, aka 'mstrmnd,' range from the film's marketing materials to its many uses of artificial light."

Among the various theories out there: "It's really about the Holocaust, one interviewee says, and Mr Kubrick's inability to address the horrors of the Final Solution on film. No, it's about a different genocide, that of American Indians, another says, pointing to all the tribal-theme items adorning the Overlook Hotel's walls. A third claims it's really Kubrick's veiled confession that he helped NASA fake the Apollo Moon landings."

"Room 237 might be the best film I've seen at Sundance this year," writes Bilge Ebiri. It "becomes a maze of references to other movies, so that at times the entirety of film history appears to be engaged in a call-and-response with itself. And that's what movie love is all about — an engagement with the art where the films all exist in a kind of continuum with each other, where the long shadow of Mephistopheles in Murnau's Faust can comment on the sight of Jack looming over The Shining's hedge maze, where the chance appearance of an actor from Jesus Christ Superstar can suddenly push your interpretation of a totally unrelated film into a different realm. The film expresses, better than any movie I can think of right now, the feeling of being lost inside the world of a film, and by extension being lost inside the world of film. There's a strange kind of power in this, at least for some of us. This stylistic gambit turns out to be Ascher's most brilliant stroke, raising what could have been a glorified DVD extra into the realm of art. And, incidentally, wiping the floor with me." 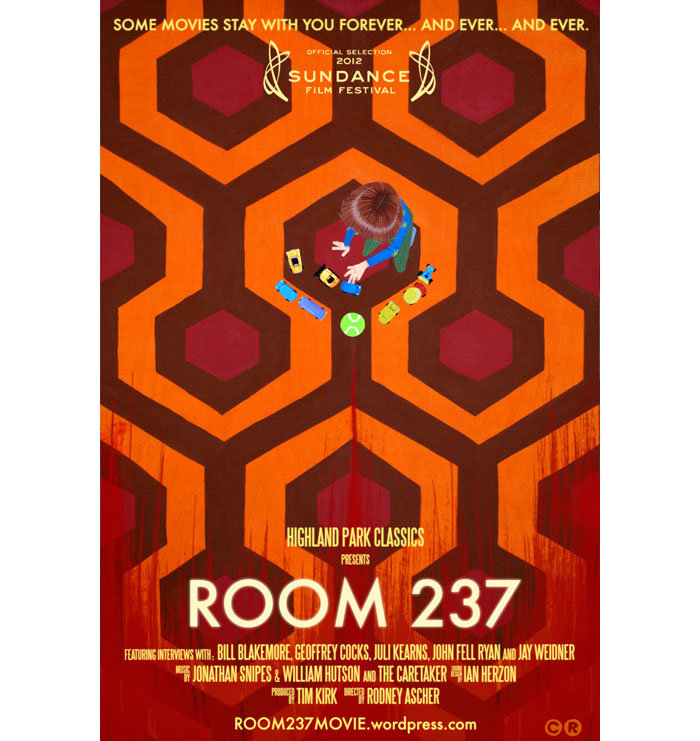 Ascher tells Filmmaker that he'd originally "planned on being a comic book artist," but "this story, about how one film has managed to inspire so much speculation and become so important to people couldn't really make sense in any other medium; I needed a movie to talk about a movie."

Explore the site for more on the filmmakers and the interviewees.

Updates, 1/27: "As parts of The Shining are played over and over again, accompanied by a nonstop commentary by its devotees, Room 237 manages to build up a vertiginous, slightly queasy momentum all its own," writes Michał Oleszczyk at the House Next Door. "Much as in the case of Errol Morris's documentaries, where reality is often blurred into the 'reality' of whoever happens to be describing it for us, so does Room 237 often suggest a peek into the minds of its speakers rather than into the realities of Kubrick's film."

"This clever homemade curio actually more closely resembles the kind of highly personal reworkings of and reflections on movies that one can easily find online than it does more conventional documentaries or academic inquiries into art works," writes the Hollywood Reporter's Todd McCarthy. "Shot through with wit, wayward intelligence and ample evidence that some people just have too much time on their hands, Room 237 is one of the more idiosyncratic blocks in the ever-growing temple devoted to Kubrick's unique talent and legacy. There will be more."﻿