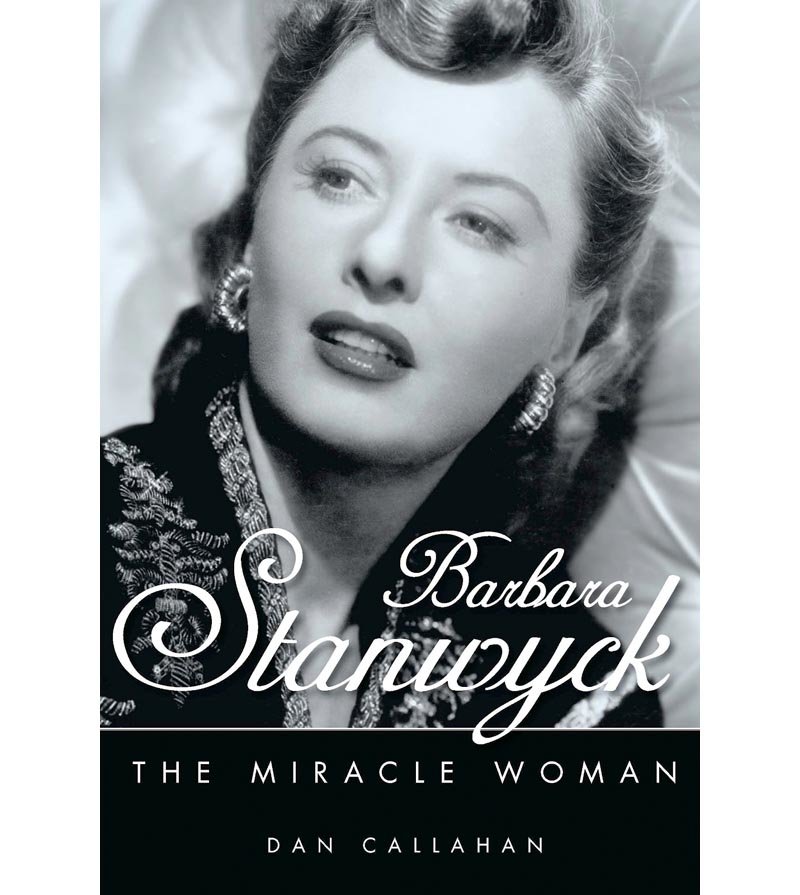 "Dan Callahan's Barbara Stanwyck: The Miracle Woman is a serious book about a serious woman, less a biography of an actress than a biography of her career," writes Scott Eyman in the Wall Street Journal. "Mr Callahan follows her choices of roles and tries to capture what she was saying about herself through her acting. It was an astonishing career, whose impressive outlines only became clear in retrospect. Most actors want to be loved — it's the Achilles' heel of the profession — but Stanwyck seems to have been after something else: respect."

Introducing his interview with Dan Callahan at the L, Mark Asch notes that "Dan concludes that Stanwyck was the most open, raw, unshowy and affectless of the Golden Age movie queens, in both her performances and offscreen attitudes; he builds a compelling personal narrative out of her contradictions: her bootstrapping tough-broad self-sufficiency (this slum kid was a rabid Ayn Rand fan and loved her Westerns best of all), her self-effacing, almost masochistic love life, and her radical spontaneity on-screen."

Tonight, Dan will be at the Museum of the Moving Image to sign copies of his new book and to introduce a Barbara Stanwyck Double Feature: Preston Sturges's The Lady Eve (1941) and Sam Fuller's Forty Guns (1957). Alt Screen proudly posts another one of its terrific roundups on both films (Dan's a regular contributor). 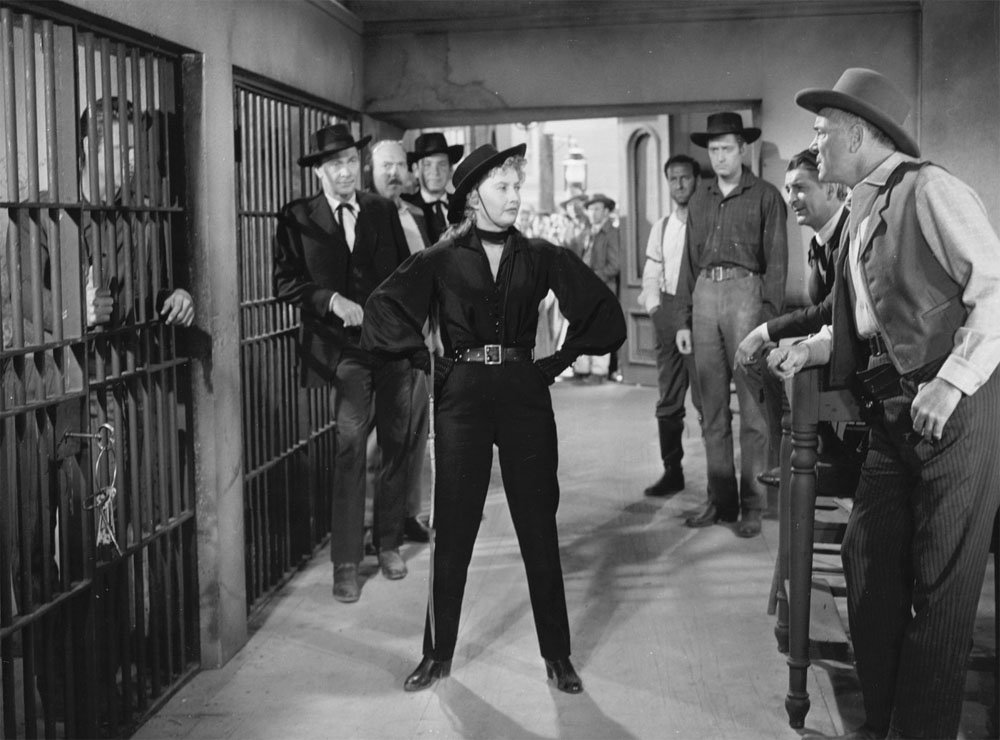 Let's add Nick Pinkerton on Forty Guns, as it's also screening as part of Reverse Shot's See It Big series: "Forty Guns is the second of two radically unorthodox Westerns that Fuller made in 1957, following the proto-Dances with Wolves Rod Steiger vehicle Run of the Arrow (in Technicolor RKO-Scope), about a disillusioned Confederate veteran fleeing the preserved Union for membership in the Sioux Nation. Where Run of the Arrow put the American Indian center-screen, Forty Guns is the rare movie — in the esteemed company of Fritz Lang's Rancho Notorious, Ray's Johnny Guitar, and Mann's The Furies — where the Western woman rides tall in the saddle. Fuller, who played the salty old cuss to the hilt, was prone in later life to giving such advice as 'Young writers and directors, seize your audience by the balls as soon as the credits hit the screen and hang on to them!' Forty Guns begins, aptly, with a stampede of action, an avalanche of horses pummeling across the prairie, led on a white stallion by Barbara Stanwyck, wearing black Zorro getup."

The other day, Farran Nehme caught a double feature at the William Wellman retrospective going on at New York's Film Forum through March 1. "The Great Man's Lady [1942], in which Barbara Stanwyck ages to over 100, had great merit and some beautiful scenes, including a wedding by a covered-wagon train as a Plains thunderstorm brews; and, later, Stanwyck dragging herself out of a flooded river, looking as beautiful as she ever did. Wellman, who like almost all of her collaborators worshipped Stanwyck, said it was 'one of the best performances ever given by anybody.'" 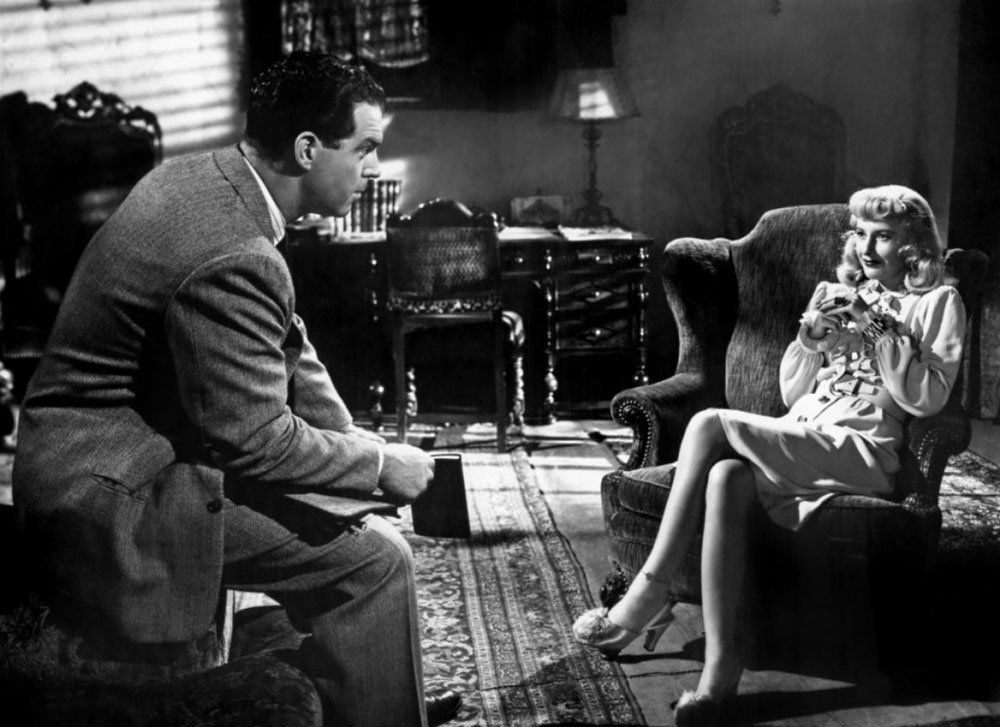 To wrap for now, let's return to the top of Scott Eyman's piece in which he explains that there's no way his review is going to be objective: "That's because I love Barbara Stanwyck. I love her because she was never beautiful, but she was always sexy, never more so than when she let her hair go white in middle age. I love her because of the way she called Fred MacMurray's character 'Waltuh' in Double Indemnity — that little touch of the Brooklyn gutter that gave her an authenticity other actresses lacked. And I love her for a guided ferocity that enlivened and occasionally transcended the actual movie at hand. It didn't matter if the material was great — Double Indemnity (1944), The Lady Eve (1941) — or just good: The Furies (1950), Clash by Night (1952), There's Always Tomorrow (1956). And it didn't matter if her acting opportunities diminished as she aged: Whether it was the Elvis-vehicle Roustabout (1964) or an episode of The Big Valley (1965-69), she didn't wink, she didn't slum, she didn't ham. She played every scene for all it was worth and no more."﻿