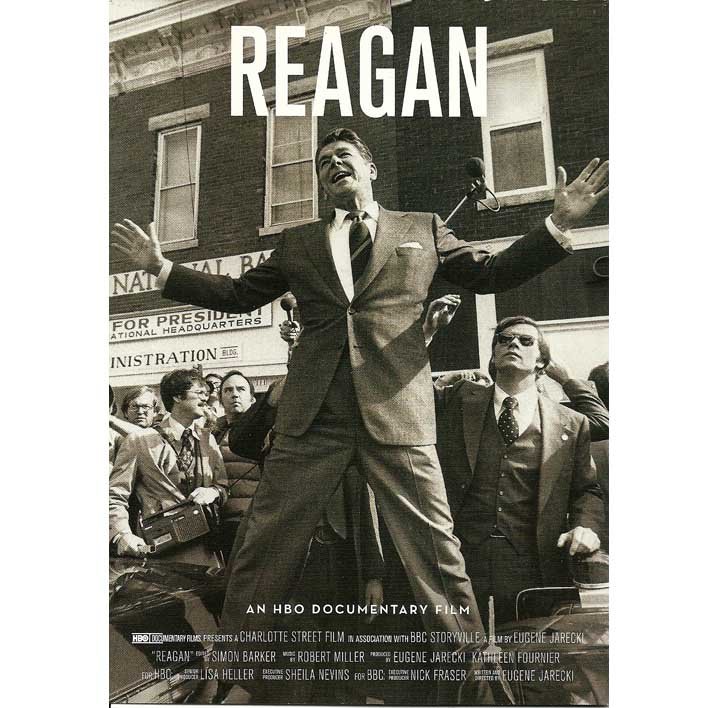 Whatever you think of Ronald Reagan — the man, the actor, the president — that is one hell of a movie poster. It's for Eugene Jarecki's Reagan, of course, airing tonight on HBO following the documentary's premiere at Sundance.

"The centennial of his birth on Sunday has inspired a national orgy of tributes and commemorations, including a video homage during the Super Bowl," notes Alessandra Stanley in the New York Times, adding that, while a couple of other channels have their own docs, "This biography is the most playful and colorful of the three, but it's also by far the most thorough and thoughtful… The wealth of archival material is almost overwhelming — Reagan made more than 50 Hollywood movies and numerous television appearances during his years as the host of GE Theater. Most Reagan documentaries make ample and sometimes sardonic use of his filmography, juxtaposing a presidential decision with an echoing scene from an old B movie. Reagan is no exception: when a historian describes Reagan's obsession with the missile defense system known as Star Wars, the film cuts to a 1940 clip of Reagan in Murder in the Air, dressed as a sailor and packing his duffel bag to foil spies with designs on what he calls 'the greatest war weapon ever invented.'"

"The film zips from Reagan's childhood in Illinois to the young Ronald as a radio announcer and then a movie star in Hollywood and then the president of the Screen Actors Guild," writes Stewart Nusbaumer for Filmmaker. "The Great Communicator is born and Reagan becomes a spokesperson for corporate America, enters politics, becomes the Governor of California and eventually the President of the United States. It's a whirlwind of a story, yet clear and informative. And there are Ronald Reagan's internal changes, such as shifting from New Deal Democrat to anti-communist Republican and then negotiator with the 'evil empire.' Always there is a certain dualism, such as the Great Communicator embracing the public while remaining extremely guarded in private. And of course there are Reagan's economic policies, which were best described by George HW Bush as 'voodoo economics.' A voodoo we're still living with."

Writing for Vanity Fair, John Lopez notes that "the documentary demonstrates the word 'Reagan' now connotes policies that had little or nothing to do with the real Ronald Reagan, or his presidency: Reagan expanded the size of government, encouraged massive budget deficits, and granted amnesty to illegal immigrants. And before liberals get too haughty about Tea Party hypocrisy, they are also wise to remember that he avoided actual large-scale conflicts (at least compared with Iraq), opened channels of communication with the Soviet Union, and presided over a period of measurable, if unequal, economic growth. If Reagan maintained unparalleled popularity, Reagan argues it was because of his genius in projecting hope and warmth to the American public. He was, after all, a highly trained actor who brought the charisma of movies into government: as any good actor will tell you, there's a zeroing out of self that occurs in performance that allows one to become a blank slate upon which the dreams, hopes, needs and expectations of your audience will be projected. According to Jarecki, Reagan had been preparing for the 'role' of president his entire life, and the key to a good performance is being able to believe fully the role you are playing. Reagan combined an ambitious man's canniness for reading the political moment with an actor's ability to believe fully the role he was called to play."

"A major missed opportunity, this history lesson on the 'Errol Flynn of the Bs' who became a political giant succeeds only in being objective," finds Time Out New York's David Fear. "Pro and con camps discuss his early years, his legacy and his passage into myth for a new generation of GOP hopefuls. But neither side gets into the whys of their viewpoints, which is crucial when you're talking about one of the most divisive Presidents of the 20th century… The film is neither a hagiography nor a critical essay. It just presents some facts and stops at the story's first page." The AV Club's Noel Murray agrees, slapping the doc with a C+.

David Poland is surprised that the man who made Why We Fight made Reagan:

Joe Leydon notes that "the conventional wisdom suggests that the conservative Republican icon turned to politics in the first place mainly because he had become unemployable in a profession where he had never, ever excelled. But here's the thing: Any fair-minded observer who bothers to look at his resume — or, better still, actually looks at some of his movies — must admit that Reagan's cinematic oeuvre is far more impressive than his worst critics, and even many of his devoted admirers, might admit. To be sure, Reagan rarely rose above the level of journeyman actor — much like Don Ameche, Fred MacMurray and several other of his contemporaries, he was more of an engaging personality than a consummate artist. But his undeniable charisma and polished professionalism served him very well in starring and supporting roles. In short: He certainly was no worse, and quite often much better, than many of the notables routinely embraced as beloved Old Hollywood contract players." To prove it, he writes up half a dozen performances and posts a couple of clips as well.

"We do this thing in America sometimes where we turn our presidents into saints — cf. Washington, Jefferson, Lincoln, FDR, Kennedy. A similar sort of thing is happening with the Gipper right now." For the Atlantic Wire, Alex Eichler rounds up "some of the more noteworthy examples of Reagan-centric encomium to grace the Web in recent days," ranging from the round-the-clock party going on at the National Review to Salon's myth-busting series, "The Real Reagan."

To go out with a bit more online viewing, at Dangerous Minds, Paul Slansky, author of The Clothes Have No Emperor, posts "the only ten minutes — out of the entire eight years of his presidency — that Reagan was observable without knowing that he was being watched. It's the realest he's ever been in front of the cameras."

Updates: "Reagan isn't bad, it's just that its topic proves too overwhelming to cover adequately in less than two hours and it lacks a unique take on its subject to make up for what we've heard before," finds Edward Copeland. "It's just not distinctive enough to stand out from other works about a figure full of so many contradictions and who so many love and hate with equal passion."