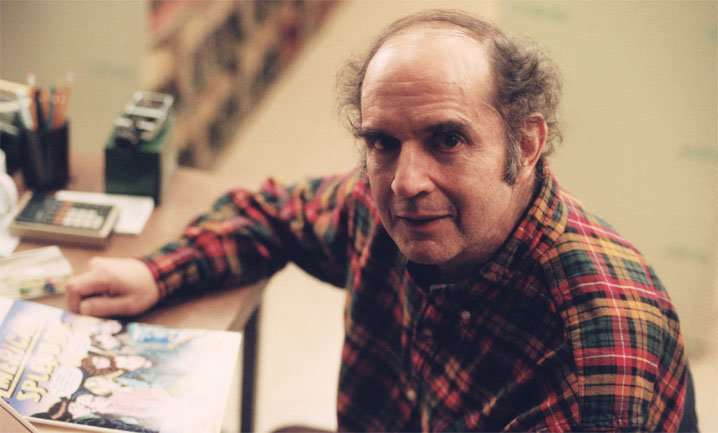 "Comic book writer Harvey Pekar, whose American Splendor was made into a 2003 film starring Paul Giammati, has died," reports the Boston Globe's Steve Greenlee. "He was 70."

"Pekar was a VA hospital file clerk, an obsessive-compulsive who grappled with loneliness and anxiety," blogs Sean P Means of the Salt Lake Tribune. "He channeled those feelings into writing, inspired by his friend R Crumb (who then lived in Cleveland, working in a greeting-card company while working on his art) to write a comic book. Crumb illustrated the first American Splendor strips in 1972, and contributed to Pekar's first full-fledged books, which he began publishing in 1976. 'He's the soul of Cleveland,' Crumb told The Plain Dealer in a 1994 interview. 'He's passionate and articulate. He's grim. He's Jewish. I appreciate the way he embraces all that darkness.'"

"American Splendor carried the subtitle, 'From Off the Streets of Cleveland,' and just like Superman, the other comic book hero born in Cleveland, Pekar wore something of a disguise," writes Joanna Conners in the Plain Dealer. "He never stepped into a phone booth to change, but underneath his persona of aggravated, disaffected file clerk, he was an erudite book and jazz critic, and a writer of short stories that many observers compared to Chekhov, despite their comic-book form."

"Let's just say that the Perpetual Misery of Cleveland has been in the news again lately, and acknowledge that no one was better at a) articulating it and b) rising above it than Harvey Pekar," blogs Rob Harvilla. "Ed Park's 2003 Voice feature/semi-interview tied to the film gets at how Pekar made his own unappealingness so appealing: 'It's a song of himself he's performed over the past 27 years, and it's a self laden with the techniques and inner-directed impulses of the most exacting of modern authors: self-pity and self-loathing, self-criticism and self-reference, self-consciousness above all.'... There's a flood of work to go back and explore now, but perhaps the simplest introduction to him remains his infamously dour David Letterman appearances, Grouch vs Grouch."

Updates: Ed Champion "was lucky enough to talk with Pekar very early into The Bat Segundo Show. I was new at this interviewing business at the time, but I did ask the man why he continued to use the 'STRAIGHT OUT OF CLEVELAND!' line for so long during the American Splendor run. And he told me that he had always intended this declaration as an alternative to superheroes. And indeed, why bask in nothing more than spandex-soaked chronicles when the real world has never had to retcon its glaring realities? A comics world without a new Harvey Pekar volume every year will be a much sadder place. For Pekar wasn’t just some gloomy guy. He was a committed cultural chronicler."

"Pekar once wrote that we'd all understand a lot more about the history of the world if we stopped memorizing the succession of kings  and focused more on how the farmers, blacksmiths and shopkeepers lived," writes Noel Murray at the AV Club. "In recent years, some have pointed to Pekar as a proto-blogger, but there was an often-unrecognized element of idealism to what Pekar was doing. He believed he was recording not just his life, but everyday American life in the late 20th century, as an alternative to future history books that might document presidential scandals but not — as they should — what a good bag of potato chips tasted like in 1978."

"I still remember buying my first issue of American Splendor — #9 — and being completely enthralled by it, although unaware at how much of an impact this book and Harvey’s life would have on my own life and career." Mike Everleth explains.

Mr Beaks at Ain't It Cool News: "When I spoke with Pekar in 2003 during the press tour for American Splendor, I was thrilled to find that he was the same no-bullshit guy I'd been reading about for years."

Updates, 7/13: The New Yorker's Richard Brody on Pekar's jazz criticism: "Pekar's taste was admirably catholic — he wrote about free jazz (including the astonishing Holy Ghost box chronicling the work of Albert Ayler), about Latin jazz, about the primordial soprano-sax soloist Sidney Bechet. The tone of his writing is modestly comprehensive, calmly impassioned; the music has lost a connoisseur, an advocate, a lover."

Artist Dean Haspiel: "Yes, Harvey Pekar was a certified curmudgeon who became a cultural icon, but he was a true-blue mensch, too. He always considered my sensibilities and we made a good team."

"Illustrating his stories for American Splendor was the first freelance gig I got while I was in art school," writes Gerry Shamray at Design Observer. "He actually made me feel like a real artist — I mean a real artist — and I never wanted to disappoint him."

"Abetted at various points in his career by the many collaborators who illustrated his comics scripts, by the adapters who, starting with Conrad Bishop's 1985 production at Lancaster, Pennsylvania's Independent Eye theater, turned his material into stage plays and, in 2003, a successful movie starring Paul Giamatti, and by the magic of television, Pekar was able to turn himself into his own literary creation, an iconic figure as unlikely in its enduring power and attraction as WC Fields or Norman Mailer's Aquarius," suggests Phil Nugent. "This was not a minor accomplishment, and it may have been what Pekar, who never tired of grousing about his lust for high-toned literary respectability from the hoity-toity cultural guardians, may have really wanted all along without knowing it."

Update, 7/19: "When word of Pekar's death spread online, social network sites lit up with remembrances of the author," writes IFC's Matt Singer. "Most were positive, but there was one exception that wound up getting passed around. 'A poet dies, no one cares,' this person wrote. 'Some asshole comic book guy dies and the world pauses to reflect.' What this person, who had surely never read Pekar's work, didn't grasp, was that Pekar was a poet, one of the comics' first. His ability to speak eloquently, honestly, and with a total lack of sentimentality about the world around him would have made his voice worth listening to however he chose to express himself. In comics, it made him not only a talent but a pioneer."