<- the previous analysis | movement index | the next analysis ->

The first time I saw True Romance, I couldn’t see a thing.

I had a window in my bedroom that looked out into the kitchen, and had anybody stopped in for a snack, there at one in the morning, they’d have seen the back fifth of the room bathed in a pulsing pus-green/electro-purple glow, like it was The Hunger all over again and Tony Scott had broken out the gels. All of the colors of the entrails of cable were on my television as I watched pay movies scrambled, solarized ghost images looping and looping—it was how I saw the adult movies, and TV Guide had assured me this one had sex.

Clarence Worley & Alabama Whitman fuck within the first 15 minutes of the film; regardless of the achronological structure of the original screenplay, I associate this occasion with Quentin Tarantino, the writer, whose Pulp Fiction my junior high friends and I would subsequently rent and find unconscionably boring: a sad, stalled cinema from a man in love with his dialogue. Movies should move, and crackle, and cut, and roar, we would say—paying no mind, it must be said, to the value of visual quality. Pretty pictures were shallow things; we preferred the substance of performance—guys kicking other guys; performance—and the adroit conveyance of script information in a brisk, non-intrusive manner.

All was academic in my bedroom; I heard Tarantino’s words, and, because editing can betray itself by audio only, I was content to invent my own decoration to surround the voice of Patricia Arquette, as I pondered what her face was like and squinted after her breasts.

The sex, however—viewed soberly—﻿functions as a capstone to the sequence directly preceding, wherein Clarence shows Alabama around a comic book store. It is operatic. The dramaturgy isolates the couple at first, with Alabama seen from high above, bathed in darkness before a flood of light comes, beckoning her to pace the stage, left and right, in wonder. What a swell place to work. Clarence, in contrast, is shown in tighter quarters, associated with soaking blue pierced with red. Basic mise-en-scène: the character with whom we are made to identify is set close to us, while the digressive longshot of the character he desires becomes functionally ‘his’ sight, so that we enter him, viewing a Patricia Arquette lit into being. It is a descriptive poetry, this of Tony Scott’s.

But while Clarence is the one to physically descend to meet the woman, we know it is Alabama who has truly approached him. The two become surrounded by electric radiance—﻿blue. The zones of Clarence’s desire, early on in the film, are always sites of illumination; rebuffed by a woman in a warmer-lit bar, he proceeds to the movie house (where he really wanted to go), desaturated and given a flickering glow by the cutting beam of a projector. The cinema is undoubtedly the heart of the matter, and Alabama must literally enter this place of love between a man and his movies from a paler Detroit exterior, nearly black and white, and lacking in sheen. This is the start of their romance. She is hot, dressed in blazing red, and draws the eye constantly while they eat pie under light filtered through window blinds, but this natural stuff cannot compare to the popping primary colors—﻿blue, red—﻿surrounding comics: another private passion for Clarence, one that he aches to share.

When we think of True Romance, we think of the young Tarantino, and this early work speaks plainly of his pop culture interests and his unvarnished fantasies of escape. I’ve heard the whole film attributed to him too many times to count. Yet Scott both understands his writer’s aims—﻿communicating them softly through hue and stagecraft—﻿and necessarily deviates. The original screenplay devotes several exchanges to Clarence’s favorite comic books, which Scott and his editors collapse into a rush of information. “You wanna see what Spider-Man number one looks like?” “You bet.” Suddenly we see interior pages from a totally different comic, and when we cut back to Clarence he’s describing a love story about “Nick” and the ring he got for his sweetheart that he wears on a chain, that he dives overboard to retrieve when a Nazi bastard tears it off, and the camera closes in on Alabama’s eyes while she listens, and then they are kissing, kissing before a field of blinding solid blue.

In his screenplay, Tarantino has Clarence elaborate on the story of “Nick” - it’s an issue of Sgt. Fury and His Howling Commandos, boasting Clarence’s all-time favorite cover, the artist of which was Jack Kirby, a hard-bitten Depression boy who rolled with street gangs and served in WWII, where he worked reconnaissance in Europe and nearly lost his legs to frostbite. A frenetic, booming stylist, he would define the cadence of American action comics. 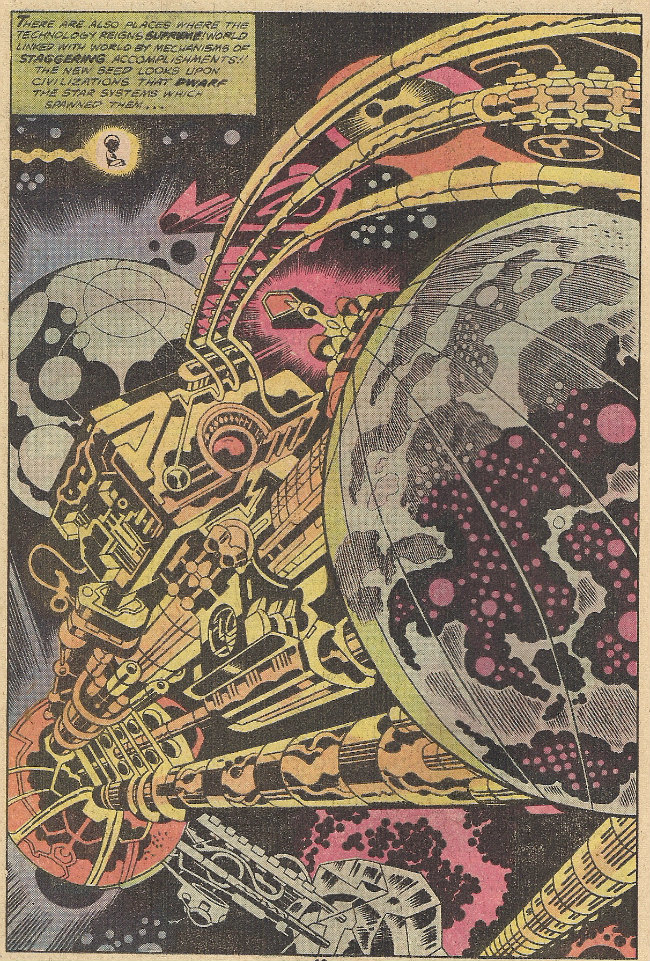 Among my favorite Jack Kirby comics are the ten issue of his continuation of 2001: A Space Odyssey. They’re completely worthless. But that’s one of the cool things about them, they’re so cheap. The best issue is #7, published in June of 1977. 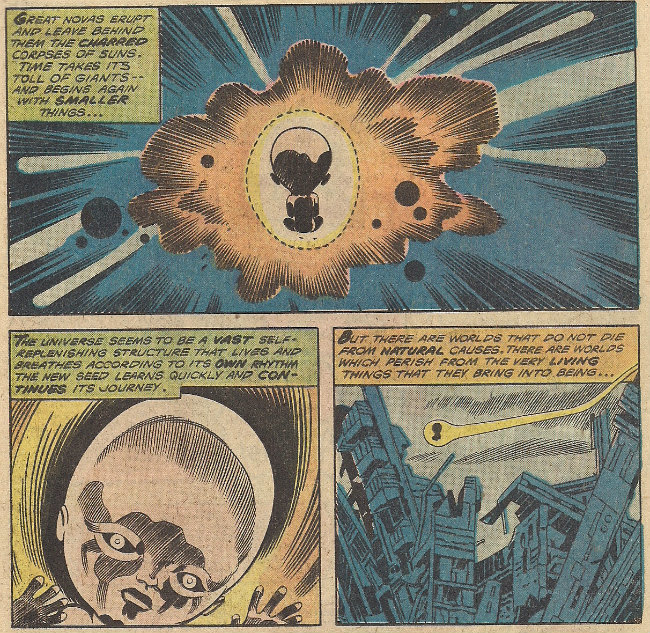 From the Stanley Kubrick motion picture, Kirby drew special attention to the image of the starchild, which he dubbed the New Seed. There are many such evolved beings, zooming throughout the universe as little living stars, always observing.

A planet is consumed by war. It is a contaminated hell of a military-industrial sort, weathered down into fields of rock and iron. Two people are in love. 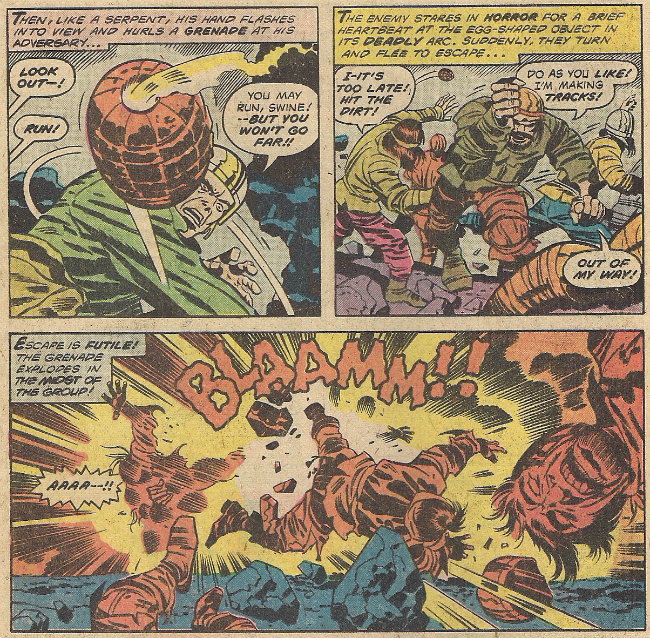 There are grenades and guns and all the other things Kubrick forgot, though Kirby, nine years after the film’s premiere, remembered the idea of evolution, and recalled, I will guess, his service in the conflagration of the ‘40s. It is like a Sgt. Fury of biblical scope. The lovers are shot dead. 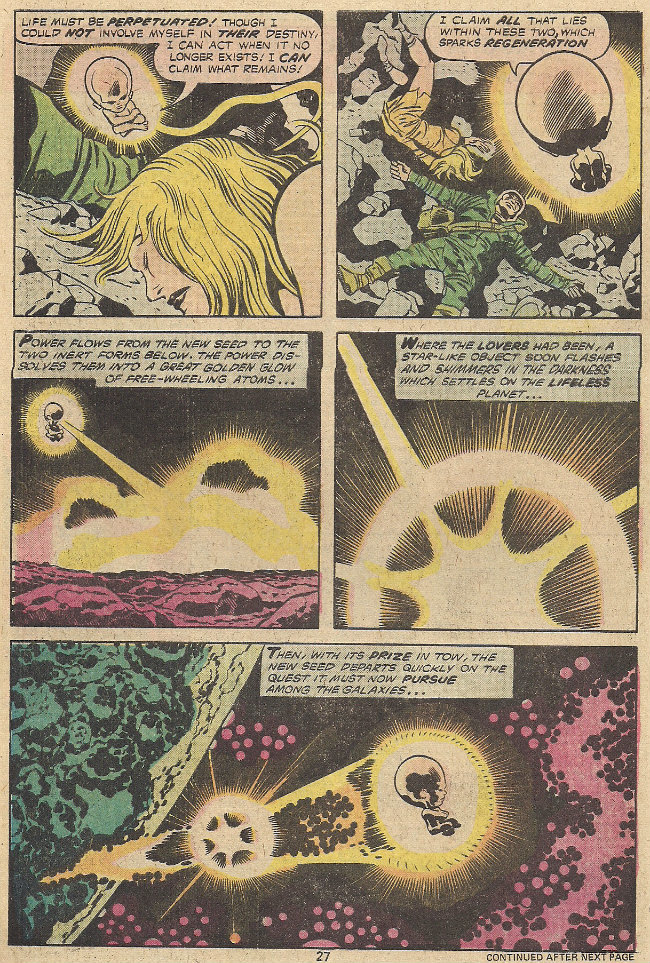 Quentin Tarantino was reportedly upset when Tony Scott saved the lovers in True Romance. His screenplay had prescribed death for Clarence, in keeping with the ethos of his media idols. Elvis Presley, yes, but Sgt. Nick Fury didn’t close that issue out reunited with a surviving sweetheart either. Still, Scott insisted. “I just fell in love with these two characters,” he told Maxim in 2008, “and didn’t want to see them die.”

Tarantino eventually concurred, to the extent that the ending of the Tony Scott film of his script was fitting to Scott’s directorial approach. This sort of thinking would have been alien to me on my first viewing, when I worked up a reckless adaptation based on voices and music. Scott didn’t write the screenplays for any of his features after Loving Memory, his 1971 debut, and thereby might fall into the category of director-as-adaptor; even the staunch auteurist can approach this formulation when the writer is as total a presence as Tarantino, whom I have since warmed up to a great deal.

Yet I don’t associate Tarantino’s cinema with sensuality; I find him cerebral in his mixing and matching of movie samples, though his love is surely real. Scott you can call a cubist, but lashed to the temporality of sequential cinema images, the effect is inescapable visceral and experiential—﻿in feeling, one might say, it is a logical extrapolation of the roaring jets of Top Gun and the zooming cars of Days of Thunder. And Scott feels Tarantino too, coaxing out the subconscious preoccupations of his Clarence, his alter ego, into a motif that builds with the anticipation of eros, boiling over the rim of loneliness: so blue.

The pair would next collaborate on Scott’s subsequent film, the considerably more box office-friendly Crimson Tide. Tarantino supplied uncredited dialogue work, the most popular assumed example of which is a scene where Denzel Washington dresses down a Petty Officer for getting into an argument over whether the one true Silver Surfer was drawn by Jean “Mœbius” Giraud or Jack Kirby. Everybody knows it’s Kirby, Washington cracks, Tarantino smiling, perhaps, knowing that Scott will direct him to say just that.

When they have finished making love, Alabama climbs out the window and Clarence follows, and she tells him about lies, the two lit harshly and fully on a precarious ledge high above a city. Tony Scott was a rock climber. This is an honest place.