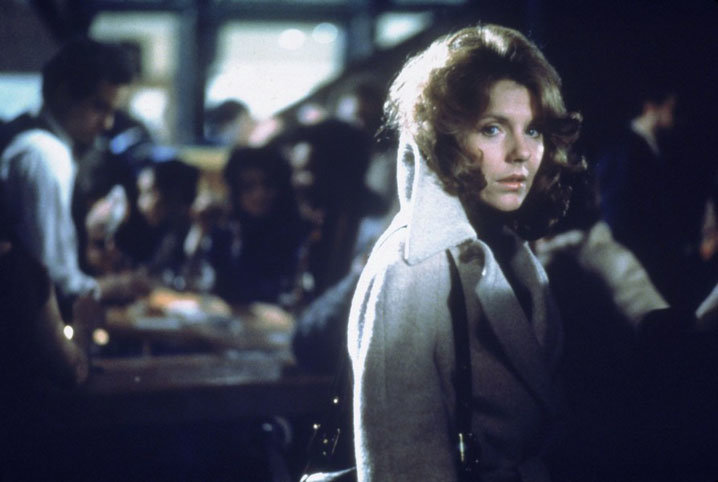 "In the mid-1970s, Jill Clayburgh turned in great screen performance after great screen performance earning consecutive Oscar nominations for An Unmarried Woman and Starting Over in 1978 and 1979," writes Edward Copeland, "then she seemed to vanish from the scene. In recent years, she had begun to reappear again in smaller roles, and I always hoped for a comeback as she always has been one of my favorites. Unfortunately, the cause for her disappearance appears to have been her health, particularly a form of chronic leukemia which has taken the actress's life at the age of 66."

"She dealt with the disease courageously, quietly and privately, [Clayburgh's husband, playwright David] Rabe said, and conducted herself with enormous grace 'and made it into an opportunity for her children to grow and be human,'" reports the AP. "Her other movie credits include Semi-Tough, I'm Dancing As Fast As I Can, Silver Streak, First Monday in October and Running With Scissors. On Broadway, she appeared in Noël Coward's Design for Living, the original production of Tom Stoppard's Jumpers, and the Tony Award-winning musicals Pippin and The Rothschilds."

Margalit Fox for the New York Times: "Ms Clayburgh, who began her career in films and on Broadway in the late 1960s, was among the first generation of young actresses — including Ellen Burstyn, Carrie Snodgress and Marsha Mason — who regularly portrayed characters sprung from the new feminist ethos: smart, capable and gritty, sometimes neurotic, but no less glamorous for all that. 'I guess people look at me and they think I’m a ladylike character,' Ms Clayburgh told the New York Times in 1982. 'But it's not what I do best. I do best with characters who are coming apart at the seams.'"

"While opening to some positive reviews, and despite Clayburgh's very strong performance, Luna didn't exactly repair Bertolucci's reputation." And yet, for Bilge Ebiri, it remains an "underseen gem."

Updates: An Unmarried Woman "is rarely spoken of today," writes Guy Lodge at In Contention, "but Clayburgh's immense performance, balancing sweetly goofy comedy with stabs of untempered pain and anger, was something of a feminist touchstone for the depiction of 'real' women in American cinema... The film now creaks here and there, but there aren't many mainstream Hollywood pictures today that would take such a microscopic perspective to an ostensibly unremarkable female protagonist, or at least one made remarkable chiefly via the nuances and fractures of a single performance."

"In its day, it was a zeitgeist movie," writes Phil Nugent, "and it's a prime example of the phenomenon where an artist has his biggest commercial and critical success with a work that doesn't really show his talents at their best. I'm a fan of Mazursky's; I think that, at his best, he knows how to satirize characters and the moment they're living in without trivializing or condescending to them, but An Unmarried Woman... isn't satire, and it isn't really a character portrait either: it's the work of an intelligent man who grew up in the pre-feminist era bending over backwards trying to show that he gets it, and afraid to use what's always been his best tool in these matters, his sense of humor, for fear of appearing unserious.... Sometime around 1990, I saw Clayburgh on Bob Costas's old late night talk show. He made no attempt to conceal his bewilderment over where her career had gone, and she made no attempt to pretend that he had reason to be confused. She, in turn, made no attempt to pretend that she didn't understand the question. Her only answer for it was to point out that it was not, even in retrospect, clear why she should have said no to some of the choices that didn't work out: why, at that point in her career, would she have turned down the chance to star in a movie for Bernardo Bertolucci? Anyway, what the hell, right? She spent the next twenty years working steadily, and if the movie roles were mostly even more forgettable, she did some good work on TV and returned to the stage and had two children with her husband of thirty years. I'm still a little haunted by Clayburgh's stalled movie stardom, though. Not because I think there was anything sinister about it, but because it points up the fragility of success and the thin, flickering line between the right and the wrong choices."

Updates, 11/7: "She was like a saner Diane Keaton, Jane Fonda without the steely edge. Relatably frazzled, funny, life-sized." Bob Cashill at Popdose.

"Perhaps conservative Hollywood did not really know how to cope with an independent-minded, intelligent performer who refused to be pigeonholed," suggests Ronald Bergan in the Guardian. "Sadly her powerful performance as a lawyer defending a Palestinian in Costa-Gavras's Hanna K (1983) was little seen, due to pressure from pro-Israeli groups, who deemed it 'anti-Israeli' and managed to limit its circulation. Upset by the film's reception, Clayburgh gave up cinema for three years, during which time she was busy bringing up her children and tending the garden of the family's home in Mount Kisco, New York."

Throughout the 90s and the 00s, "the roles that should have been welcoming hardly existed anymore. Only in life did anyone wonder what had become of all those Ericas 30 years later." Janet Maslin in the NYT: "She remained elegant, lovely and so recognizable that she became accustomed to being treated as an avatar. 'My God, you've defined my entire life for me,' one weeping Unmarried Woman fan told her in 2002, and that experience was apparently not unusual for her."

Update, 11/9: Broadway's dimming its lights tonight for one full minute in memory of Clayburgh, reports the NYT's Patrick Healy.

Updates, 11/11: "The passing a few days ago of actress Jill Clayburgh really strikes a blow into the hearts of women of a certain age, for whom Ms Clayburgh was almost an avatar, living out different lives that we weren't, but might have, in different circumstances. Lovely to look at but not a devastating beauty, with Jill it was instead her intelligence and grace under fire that sealed the deal, making her an audience favorite for a generation." medusamorlock introduces a series of clips.

"Jill Clayburgh won us by being the face we saw staring back at us from the Bloomingdale's window — the discomfort we felt the first time we took our seat opposite a therapist or a blind date," writes Lesley Dormen. "When she decided against Alan Bates in the movie An Unmarried Woman, we could feel her brain deliberately forming its decision — even startling herself with it — a nanosecond before it exited her mouth. On-screen, we watched a woman re-invent herself." Also for Vanity Fair, Sheila Weller: "Jill Clayburgh, you were more important and resonant and personal to us, your New York female peers, than any obituary can register. Rest in peace."