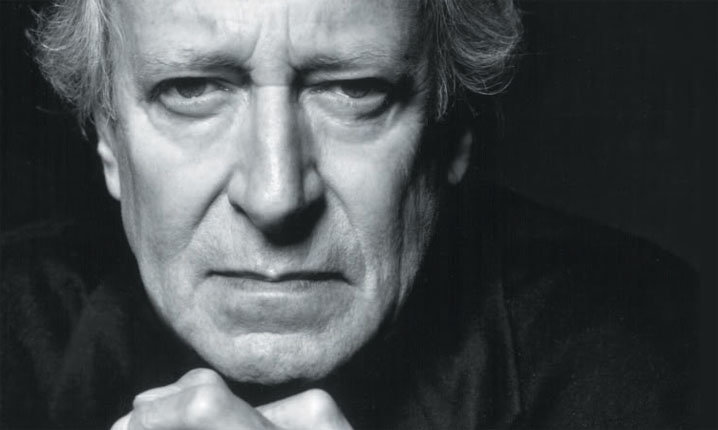 "John Barry, who composed the score for 11 James Bond films, has died aged 77," reports Haroon Siddique for the Guardian. "Barry won five Oscars and was awarded an OBE in an illustrious career that saw him work on a number of other acclaimed film scores, including Born Free, Midnight Cowboy and Out of Africa."

This morning, composer David Arnold tweeted, "I am profoundly saddened by the news but profoundly thankful for everything he did for music and for me personally." He then pointed his followers to two clips, the first being "Mary's Theme" from Mary, Queen of Scots (1971) — "this is the one that always does it for me" — and the theme from Somewhere in Time (1980).

"Barry's son-in-law, BBC business reporter Simon Jack, said he 'truly loved writing music as much as people enjoyed listening to it. He saw himself as much a dramatist as a composer and his music was inextricably linked to the stories told on the screen.' Jack also remembered him as 'a wickedly funny man' whose 'passion, genius and sense of humour will be terribly missed by his family and friends.'" More.

Listening (56'44"). For Your Ears Only, "Miss Moneypenny's guide to the theme songs of the James Bond films." From the BBC Archive, via Catherine Grant. Viewing. Clips from David Cairns, Marc Campbell (Dangerous Minds) and Brian Clark (Movieline). Also, a two-minute report from the Guardian. 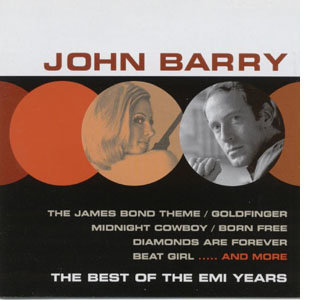 Updates: "For all his great work (and there is so much great work — from the Bond scores to The Ipcress File to Petulia to Out of Africa, I actually decided a few years ago that I think his score for Richard Attenborough's much-maligned Chaplin might be his best." And Bilge Ebiri's got a longish clip.

"While it would be a little outlandish to say that John Barry lived a James Bond lifestyle, it wasn't hard to imagine him in the world of The Persuaders, driving an open-top E-type to the south of France, immaculately turned out, eloping with the au pair," suggests Bob Stanley in the Guardian. "He was, more than many familiar faces, a movie star… John Barry was pop, as pop as the Beatles, and as representative of mid-60s London as anyone. He shared a flat with Michael Caine, married Jane Birkin, and owned a pad in super-hip Cadogan Square… Though he was from the old, pre-Beatles world of arrangers and producers, he rose to the challenge of the new order and got better and better."

"In 1969, he scored John Schlesinger's Midnight Cowboy, one of the first movies to use a selection of pop songs on the soundtrack," writes Adam Sweeting for the Guardian, where Phelim O'Neill comments on a string of clips. "It was a technique that would be copied by countless imitators. 'That movie is still shown at the cinema school at UCLA as the epitome of how songs should be used in the movies,' Barry said in 1997. 'We only bought in a couple of songs, Everybody's Talkin', sung by Harry Nilsson, and a John Lennon song, and for the rest we got young songwriters to score the scenes with songs. The songs work because they were written for the movie.' However, Barry always gave credit to the great classically influenced Hollywood film composers, such as Bernard Herrmann or Max Steiner, and echoes of their work would frequently bubble up in his own."

"His scores — particularly, though by no means exclusively, those for the Bond movies — are always steeped in the mood and the moments of the film, cranking up the impact without ever resorting to musical button-pushing." Mark Monahan: "From the adrenalin-shot of the title track to On Her Majesty’s Secret Service to the serene nostalgia Out of Africa, the languorous sensuality of Body Heat to the slinky-but-deadbeat Sixties twang of The Ipcress File, what you hear with a John Barry-scored movie tends to blend inextricably with what you are seeing, to such an extent that many of those pictures he wrote for (especially those dozen-or-so 007 outings) are entirely unimaginable without his contribution… Often, a single chord is all it takes to recognise a John Barry score. And, although he continues to be sampled, pastiched, parodied, aped and plain copied, no one has ever come close to replicating the heads-down beauty and sheer dramatic brilliance of the real thing." Also in the Telegraph, Monahan lists his "Top 10 John Barry scores." 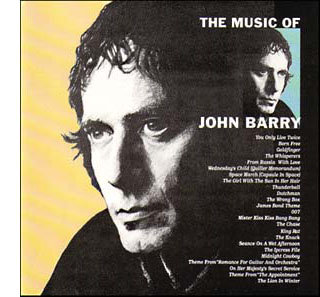 "He brought a lush romanticism at odds with the violence depicted onscreen which helped shape 007, the secret agent which men everywhere wished they could be," writes Tony Dayoub, who's also got a batch of clips.

More clips and annotations from Sean O'Neal at the AV Club and IFC's Matt Singer.

"I had the privilege of interviewing him a few years ago for a profile," writes Bruce Handy for Vanity Fair. Barry's "later scores were, I think, the purest expressions of his true musical personality. I happened to interview him on a cloudy, gusty day at his home on the north shore of Long Island, where his living room and studio had dramatic views of the water. It was spring but felt like fall. A perfect Barry day."

Listen to Shirley Bassey singing "Goldfinger" at Old Hollywood, and as you do, read Michael Caine's recollection of how much work Barry put into its composition.

Updates, 2/1: More from Bilge Ebiri: "I once described John Barry as the British Ennio Morricone. I was joking at the time — it was really just another way of saying that he was awesome – but in some senses the comparison now strikes me as apt. Morricone and Barry both made music that often lived on a different sphere than the films they accompanied."

For Adam Sweeting, writing at the Arts Desk, "one of his most original soundtracks dated back to 1965, when he composed the score for The Ipcress File. With Michael Caine playing the anti-hero, Harry Palmer, as the kind of down-at-heel flip side of James Bond, Barry concocted a masterly un-Bond-like soundtrack bristling with mystery and menace, largely through his use of the cimbalom. Technically, the instrument is a hammered dulcimer of eastern European extraction, and Barry daringly thrust it into the foreground, where its harsh, metallic tone sounded like a giant skeleton with electric shocks running up its spine… They say that in Hollywood nobody knows anything, but John Barry understood more than most about the art of the soundtrack. 'I think most good scores to some degree go against the picture, or give another dimension to the picture,' he said in 1997. 'That other dimension is what I always strive for.'"

Updates, 2/5: "Barry didn't just make music, he made movie magic," writes Kimberly Lindbergs for TCM. "The searing melodies, guitar driven rhythms, punchy horn sections and lush orchestration found in his scores have the ability to transport audiences to another place and time. Few artists can claim to have that kind of power but Barry's musical wizardry is renowned. I thought it would be fun to take a look back at Barry's impressive career and see how he progressed from a film projectionist's son into an Oscar-winning composer."

"His waltz from the risible The Betsy is one of my guiltier pleasures," confesses New York's David Edelstein. "After 33 years, I can remember the lovely, flickering credit sequence, with its tour of brilliant automobiles through the ages. But it's Barry's Bond scores that gave those movies their a license to kill."

Update, 2/8: "Barry's music represented the dying cultural imperative of the Continental Man — straining for an ideal of manhood that exists primarily in the protagonists' heads." Elvis Mitchell in Movieline: "A perfect example is his Midnight Cowboy score, whose harmonica, strings and pop drumming rival Ennio Morricone's work… Barry's elegiac songwriting made him the leading proponent of the dimming-of-the-light subgenre: They Might Be Giants, The Last Valley, Monte Walsh and Robin and Marian all belonged to the self-conscious passing of masculinity into myth niche. Barry's playful, yet mournful Robin and Marian — in which Sean Connery is a spiritually exhausted Robin Hood the same age as Russell Crowe's in last year's Robin Hood — has a knowing beauty… It's unfortunately easy to detail a study of great Barry scores for movies that shouldn't be seen, or even scores for films that surfaced and sank quickly, such as writer/director James Bridges's most personal film, Mike's Murder — in which Debra Winger discovers the gay life her friend-with-benefits led after his death. (It could stand to be remade.) But I found myself thinking of an Orbital song upon hearing of Barry's death: 'The Girl with the Sun in her Head.' Orbital used the title of Barry's 'The Girl with the Sun in her Hair' — a wistful tilt he did initially for a 60s British shampoo commercial and later gave an extended treatment — as a launch point, and Orbital's take throbs into life with the sound of a beating heart. Barry provided the spark for their best and most complex recording ever, one that not only toys with synth arrangements against a backbeat that could've been a Hartnoll brothers' tribute to Barry's own duality, but which also reminds us that somewhere, John Barry lives on."