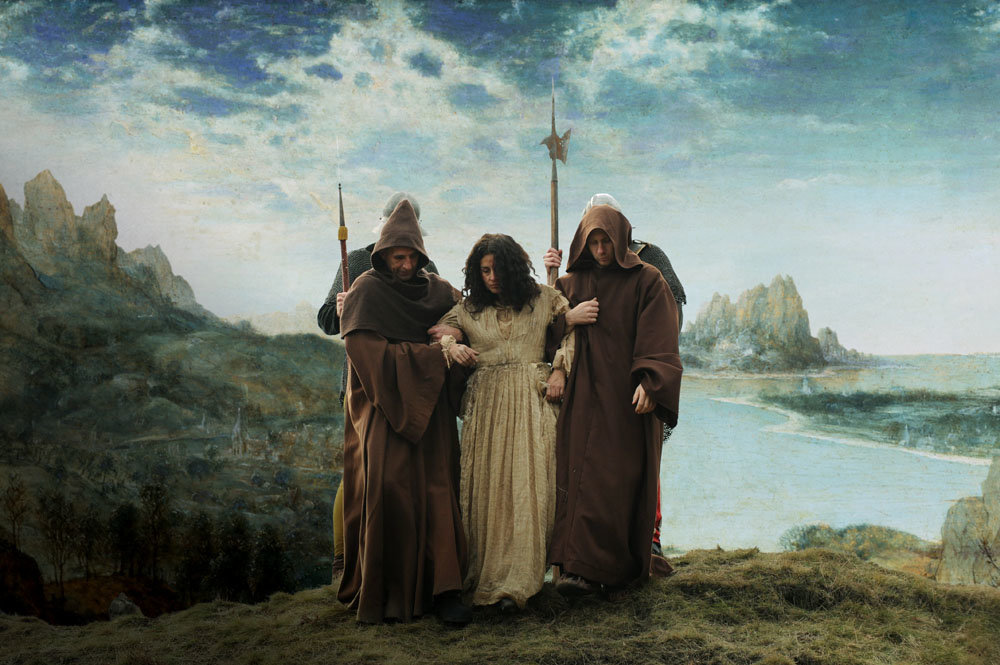 "Pieter Bruegel packed his 16th-century Passion painting, The Way to Calvary, with hundreds of figures based on his own contemporaries, conflating the persecution of Christ with the Spanish occupation that raged outside his studio," begins Eric Hynes in Time Out New York. "In a feat of artistry worthy of its source, Polish director Lech Majewski (Gospel According to Harry) takes us deep inside the Flemish master's beautiful nightmare, bringing to life dozens of the work's characters, from carousing peasants and murderous redcoats to the painter himself — uncannily embodied by former replicant and shotgun-wielding hobo Rutger Hauer. While Bruegel's painting told a story, Majewski's film is a deconstruction of said tale, forsaking traditional narrative structures for a series of authoritatively realized tableaux."

"Adapted from a book by the art critic Michael Francis Gibson, who wrote the screenplay with Mr Majewski, the film does not offer much plot," notes Daniel M Gold in the New York Times. "In its stead, it portrays — for the most part wordlessly — the daily lives and often harshly casual deaths in and around 16th-century Antwerp, episodes that often wind up in Bruegel's panorama."

Nick Pinkerton in the Voice: "The film's little dialogue comes from the artist, his patron (Michael York), and the Mary figure (Charlotte Rampling); the soundtrack is given mostly to the musique concrete of clogs against stone, the caw of carrion birds, and the lash of the whip, for Bruegel's Flanders is the property of the Spaniards, no less casually violent in the Old World than in the New. Against this context, Bruegel's transplanting of the crucifixion scene to his present day is explained as a sort of protest art — and an altogether more philosophical idea of human suffering."

"Most industriously," writes Miriam Bale in the L, Majewski "uses digital tools to explore Bruegel's perspective techniques, looking at every angle from every angle as if deep within a video game. Majewski has said, 'I want the viewer to live inside the painting.' Like Lara Croft would."

"The word 'film' seems inadequate" to Lauren Wissot (Slant), for whom The Mill and the Cross "has more in common with the type of work a mixed-media artist such as Vik Muniz."

At Film Forum in New York through September 27.

Earlier: An overview of our program The Films of Lech Majewski, viewable everywhere in the world except the United States, Canada and Poland through February.﻿

Update, 9/15: At the AV Club, Alison Willmore notes that "a motif of frames — shots seen through archways, doors, and barred windows — reminds viewers of the source for the film's visual long before it pulls out to reveal the finished work, hanging in a museum gallery."﻿