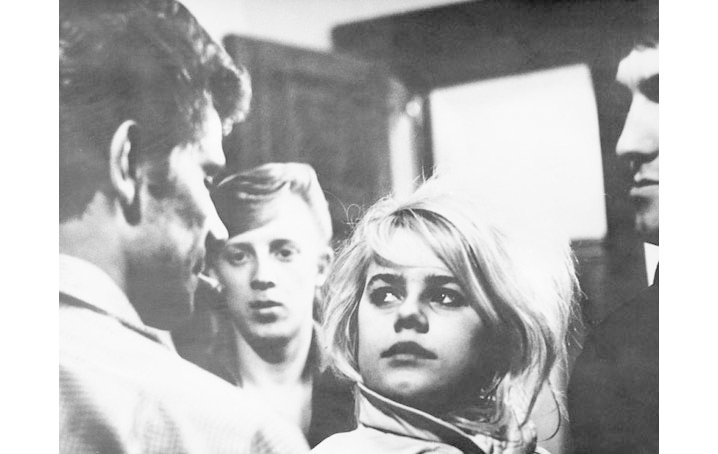 "Swedish actress Lena Nyman, who starred in Ingmar Bergman's 1978 film Autumn Sonata, died Friday after a long illness, her agent told AFP. Nyman got her breakthrough in Vilgot Sjöman's 1967 and 1968 landmark films I Am Curious (Yellow) and I Am Curious (Blue)… She obtained the Swedish Film Institute's Guldbagge award for Best Actress in 1968 for her work in both films, which had caused scandal because of her nudity… Tributes to the actress poured in in Sweden Friday, where she is known for her work in theatre, film and television."

"Much of I Am Curious' strength and charm derive from Lena Nyman's brave performance," wrote Gary Giddins for Criterion in 2003. "Nyman is now known to American audiences, if at all, for her superb performance as Liv Ullman's debilitated sister in Bergman's Autumn Sonata (1978) — a role in which Sjöman's heroine is virtually unrecognizable. Her Lena was so convincing that 'fan mail,' as sampled in Blue, consisted of death threats and insults. By engaging in the faux-sex of I Am Curious, Nyman had crossed a line, and was perceived not as an actress, but as a 'whore.' (This dilemma is familiar to Philip Roth's admirers.) Yet her Lena is funny, touching, and genuine, never more vulnerable than in the couplings she engages in or — as with Blue's remarkably non-neurotic lesbian episode — witnesses."

And this, just a day after the death of Maria Schneider, another European actress who spent her later years struggling to overcome the perception that she embodied the sexual revolution of the mid-20th century — but little else. Let a thousand think pieces bloom.

Updates, 2/5: In the New York Times, Dennis Hevesi recalls that the US Customs Service banned (Yellow) in January 1968. "That November a federal appeals court ruled that the movie was protected by the First Amendment, resulting in its release in March 1969. The movie made $5 million in six months and remained the most financially successful foreign film in the United States for 23 years."

At the AV Club, Sean O'Neal posts a scene deleted from (Blue) and notes that "unlike Schneider, despite the backlash Nyman seemed unafraid to be among those who represented the sexual revolution, starring in many more films that pushed the boundaries of social mores. In all, Nyman starred in more than 50 Swedish films and TV shows over the course of her career… [T]ime and again Nyman proved she was a versatile actress capable of both the extremes and quietude of human emotion."

Update, 2/7: "The main interest of I Am Curious (Yellow), which reflects the changing political and sexual climate of Europe in the late 1960s, was its blend of newsreels, cinéma vérité techniques and meta-narrative, much influenced by Jean-Luc Godard," writes Ronald Bergan in the Guardian. "This succès de scandale was followed in 1968 by I Am Curious (Blue) — yellow and blue are the colours of the Swedish flag — which used material left over from the earlier film, including the fictitious affair between the director and his star… Sjöman first cast Nyman in 491 (1964), the title of which refers to the biblical passage in which Jesus proclaimed that each man will be forgiven '70 times seven.' The film promised to be about 'the 491st sin' — audiences could take their pick from rape, sodomy and bestiality. It dealt with a group of six teenage boys who participate in a social experiment — they are encouraged to behave in an antisocial way without punishment. Nyman played one of their victims. Few could make a connection between the Curious films and her subsequent career. As a member of the Royal Dramatic theatre, she played Gina Ekdal in Ibsen's The Wild Duck, Polly in Brecht and Weill's The Threepenny Opera and Bertha in Strindberg's The Father. The latter acclaimed production, directed by Alf Sjöberg, became a 1969 film with Nyman repeating her role as the unhappy daughter fought over by a retired army captain and his wife."