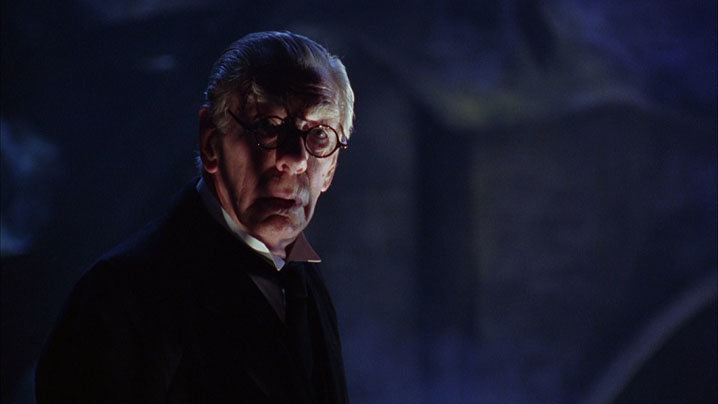 "Michael Gough, the actor who died on Thursday aged 94, achieved cult status for his roles in the Hammer horror films of the 1960s, but became better known as Alfred the Butler in Tim Burton's Batman films," reports the Telegraph, adding that "he was also an accomplished stage actor, bringing finesse, variety and passion to some of the longest, most difficult and sometimes dangerous roles in drama."

Toby Hadoke for the Guardian: "Michael Gough first made his cinematic mark as Nicholai to Vivien Leigh's Anna Karenina (1948), Michael Corland opposite Alec Guinness in The Man in the White Suit, and Martin Raynor in Michael Anderson's thriller Night Was Our Friend (both in 1951)… He excelled in character roles on the big screen for more than five decades, drawing on his classical and theatrical resources for leading directors: for Ken Russell, he appeared in Women in Love (1969); for Derek Jarman, Caravaggio (1986); and for Martin Scorsese, The Age of Innocence (1993). His feline features and ability to lend gravitas to the otherworldly often took him into the realms of the fantastical. He worked for Hammer Films and Amicus in a number of genre productions that retain a cult following, notably Dracula (1958), The Phantom of the Opera (1962), Dr Terror's House of Horrors (1965) and Horror Hospital (1973). Many of these films were good, some not, but Gough was never less than committed, and always eerily memorable. It was these roles that gave him a serious cachet among a generation of film buffs who became movie makers, such as David Zucker, who cast him in the comedy spoof Top Secret! (1984); Wes Craven, in The Serpent and the Rainbow (1988); and Tim Burton, in Batman (1989)."

Glenn Kenny on The Man in the White Suit: "All the obits are of course citing his avuncular Alfred, but I always most enjoyed him playing non-snivelling little shits of this sort — he had great features for conveying unstudied contempt, an emotion I can thoroughly relate to, I have to admit. Such a fantastic presence, always; we should all be glad he enjoyed such a long and fruitful career, he gave us an awful lot to savor." More.

Update: At Dangerous Minds, Paul Gallagher posts a few clips, "a small selection of highlights from Gough's career, which gives only a hint of the quality of his talent and the diversity of his roles."

Updates, 3/18: In Peter Yates's The Dresser (1985), Gough appears as one of the actors in Albert Finney's traveling company, who wears his street clothes under his Shakespearean costume so that he can zip out to the pub between scenes and 'trouserloony.'" Richard Harland Smith for TCM: "Nearly 30 years later and I'm warmed by my memory of his delivery of that word, which as far as I know doesn't really exist… yet coming from Michael Gough you knew exactly what he was talking about. I grew up with Gough; his surname is pronounced 'Goff' but for years I made it 'go.'"

Erich Kuersten at Bright Lights After Dark: "He brought upper crust polish with a slight hint that his life was way darker and stranger than the poshness let on — making him a perfect Alfred, and a perfect mad scientist — take for example the great piece in Carfax Abbey, which refers to him as 'the George Zucco of British Horror.'" And C Jerry Kutner: "I have written before of my admiration for the late Michael Gough… who could move effortlessly from the serious classical theater of Shakespeare, Chekhov, Harold Pinter, and Bertolt Brecht, to the florid melodramas of Jimmy Sangster and Herman Cohen.  Which is another way of saying that — like Sirs Laurence Olivier, Alec Guiness, or John Gielgud — Michael Gough had an extraordinary talent for camp, a talent that he was more than happy to deploy under the appropriate circumstances."

Viewing (4'40"). George Clooney had nice things to say about Gough when Joe Leydon talked with him about Batman & Robin.