IRAN IN COLOR DREAMS AND VISIONS OF STAN BRAKHAGE

How can we approach Stan Brakhage’s world? Shall we return to his inspiration drawn from the poets of San Francisco and the New York experimental filmmakers of the 1950s? Should we consider his inadequate filmmaking facilities which shrank every year, eventually reducing him to scratching negatives with his fingernails on the hospital bed at the end of his life? Besides all his sources of inspiration, from Eisenstein and Dreyer to Gertrud Stein and Rilke, I intend to examine rather an obscure source material for 18 short films of Brakhage, which most probably hasn’t been taken into consideration yet: Iran and its classical arts.

These 18 short films, called Persians, and made between 1999 to 2001, are among his last films, and based on years of studying Iran’s art and culture. They have been made by the methods of painting and scratching on the film strip; the method Brakhage first employed in Dog Star Man (1961).

The Persians is like a voyage through the architecture, miniature, calligraphy and that unique inner rhythm of Iranian culture in dynamic and spontaneous abstract forms. All of these elements have been intently studied by Brakhage, therefore watching them is a cinematic meditation entering a time-machine of hundreds of years of Iranian culture.

At first glance, it seems difficult to recognize any obvious element of Persian arts in the series, but we should bear in mind that “film must eschew any easily recognizable reference,” in order to allow images to come to life. Brakhage believed that film “must give up all that which is static, so that even its stillnesses-of-image are ordered on an edge of potential movement,” and then “the forms within the film will answer only to each other.1

In order to answer how one can approach these films, Brakhage states: “Its appreciator is one who is capable of sensory justice and evolutionary thought, free from dogma and representational bias.2

While most of the known studying methods in cinema are partially or entirely based on the issue of representation, a Brakhage film is where the analyzer faces an impossible setback. It would be inefficacious﻿ to freeze these films at a point to find a major difference, in terms of representation, between that specific shot and its former or latter frames, except identifying some certain shapes, colors and materials existing on the frame. Our visual perception is highly tied to our perspectival thought, and that is exactly what Brakhage abandons. Therefore, unlike analyzing the films in detail, whether a frame or a sequence, the mere way of perceiving the significance of the Persians is to see them continuously and repetitiously. Like listening to a piece of music, outburst of images in the subconscious mind, which is more similar to the structure of a dream, gives us enough material to start a very loose reading of the text.2

Scholar Inez Hedges argues that Brakhage evokes the “freshness of visual perception before the developing child learns to categorize shapes and colors into named objects and qualities.3 So the images seem as if a child is seeing or remembering a vision of a foreign land; nevertheless, beyond the impromptu motion of the color plates a deep understanding of a culture is displayed.

Brakhage’s narrative in the Persians can only be fully understood if its relation to the Iranian art and their cinematic, abstract translations is considered. 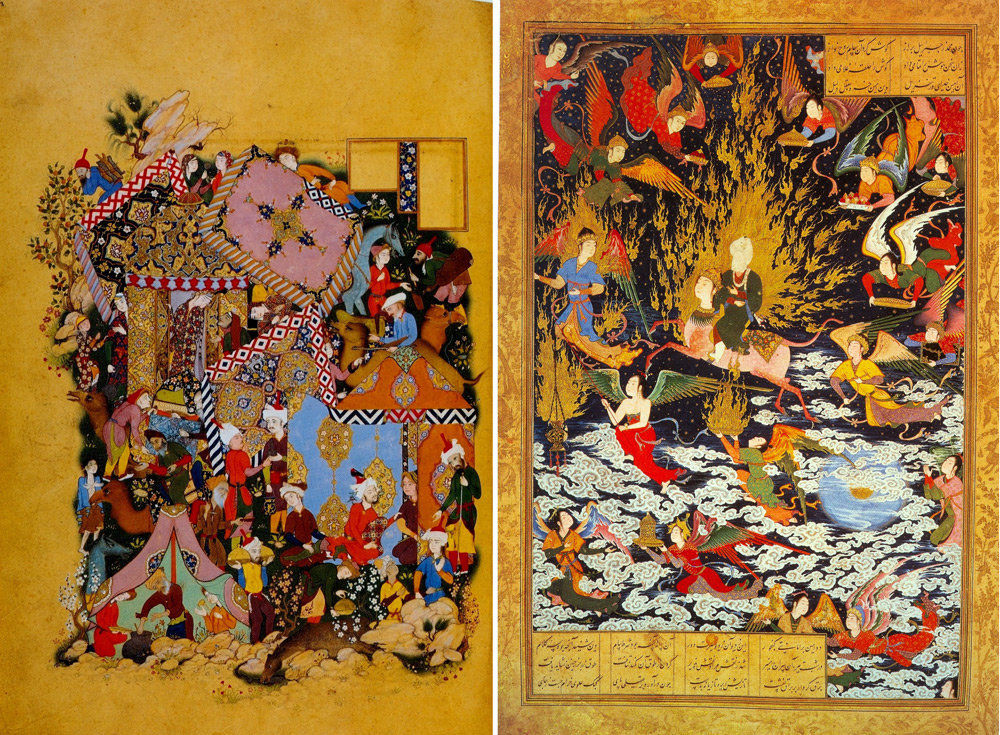 Above: Two miniatures from the 16th century.﻿

Miniatures, as the best-known form of Persian painting in the West, are small paintings on paper, whether a book illustration or a separate work of art. In these works, warm, sharp and lively colors appear on flat-color backgrounds. Unlike the tradition of European religious paintings, mythical creatures and angels, instead being represented naked, wear the richest clothes in reds and yellows. Persian miniature, by its dazzling density represented in its compositions, captures the eye to the centre of the work. It seems as if the whole work has been constructed around that fading pivotal point. Such technique can also be noticed in Brakhage’s films, and in fact it must be said that all the emotional impact of the Persians comes from this invisible central point. If the audience stares at the centre of the screen, it delivers a hypnotic effect and the colors and shapes which seemed to have been haphazardly placed beside each other suddenly come to possess a wondrous order. In one instant, the two-dimensional image detects volume and depth and audience feels as if she/he is walking in a tunnel of floating images. A sense of infinite zoom in/out gives a very specific texture to the image, and also small pieces of color on the screen become massive landscape scenes. Fred Camper points out how in the Persians these zooms are “creating the effect of a precipitous balloon ascent from the landscape-like shapes we've been seeing…on any scale, the imagery remains a skein of interconnected organic shapes worthy of nature's fractals.4

Persian miniatures, like a Pieter Bruegel painting, are successive sets of distinctive sceneries, which are all placed in one composition and apply constant zoom in/outs to detect various parts of the picture. In miniature, there is usually a story flowing based on the poems of the great Persian poets, with the poem shown at the sides which gives hidden order to the works, close to what Brakhage calls the “thoughtful imagination.” This order is rooted somewhere outside of the frame, as miniature itself always quotes other forms of art, whether architecture or literature. However, due to the dreamy structure of these remarks in the Persians (in dreams everything is meaningful—or meaningless), without any previous knowledge on the source of inspiration for these works, while they are still pleasing to the eye, they remain abstract. But as soon as a link between them and the Persian arts is established, they become as tangible as a real representation. 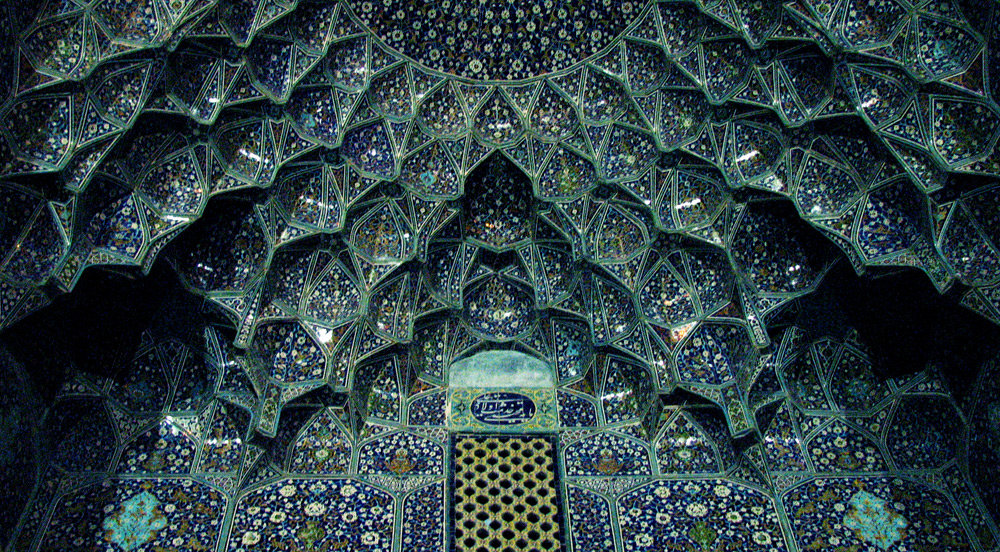 Above: A mosque in Isfahan (© Reza Hakimi)﻿.

The Persians look like a spontaneous combination of architecture of cities such as Isfahan, Yazd, and Shiraz, representing them from the point of view of a Jackson Pollack. Brakhage captures the spirit of these places, without restricting himself to the limitations of realist representation. “It's not simply that the viewer can't name what he sees,” says Camper, “by mixing shapes related to one another with a form that abjures predictability and repetition, by mixing order and apparent randomness, by using layers of images that prevent the eye from locking in to any one, he shifts the viewer from comprehending solid objects in the ‘real’ world to a state of profound self-questioning."5 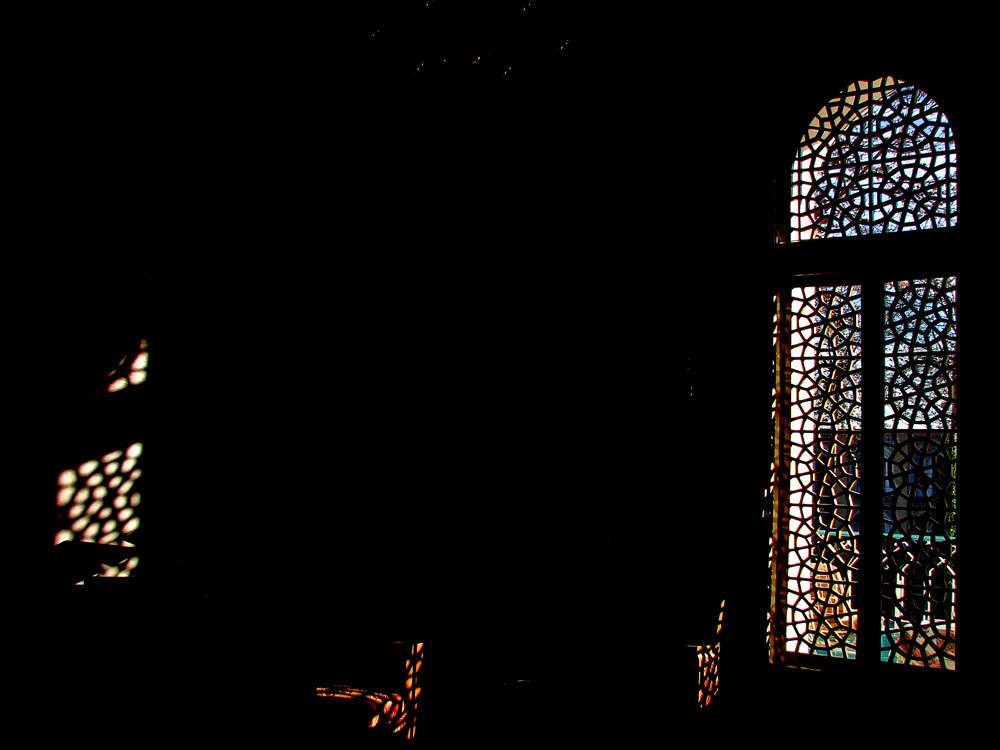 Above: Interior of a Persian house (© Reza Hakimi)﻿.

In this regard, one of the notable features of Persian classical architecture is the way darkness and light play together in the body of buildings, and how darkness defines light, in the same way using silence in music intensifies the effect of the note which follows it.

In the first parts of the Persians, Brakhage relies on the co-existence of darkness and light in the moving images, as they alter from live colors and complicated forms into simpler forms on a black background. Occasionally, the dark screen lasts for few seconds and gives a sense of suspension, almost like an Ahmad Jamal Trio recording.

Brakhage is fascinated by the tradition of using glass in Persian architecture. The passing of light from the stained glasses in Persian buildings—one of the most vital characteristics of residential architecture in Iran—has been brought to life in the form of vivid colors in the film. In architecture, the significance of these colors and images is the way this light, passing through the glass, is reflected on the floor and various images and seductive compositions it creates on the surface. Brakhage, here, has made the celluloid strip play the role of the window, and the cinema screen as the floor of Persian house, which, for its settlers, alters into a changeable scene of abstract colors and compositions.

But perhaps the most important part of this refraction on the floor that inspires Brakhage’s style is when these rays of color drop on Persian carpets. These carpets, which possess a delicate and precise symmetrical form, host another set of colors caused by the shining light passing through glass. Brakhage calls these colors “un-nameable,” and he explains that an observer’s perception is based on the afterimage: “The eye’s retention of yellow is blue and the afterimage of brown is often something I call 'red-black' […] The shifts of tone, as the mind absorbs, is understandably variable along a strip of film, but a tune undergoing melodic variations. These variations are subject to interruptions by absorption of all other tones (and shape shifts) of the surrounding room.6 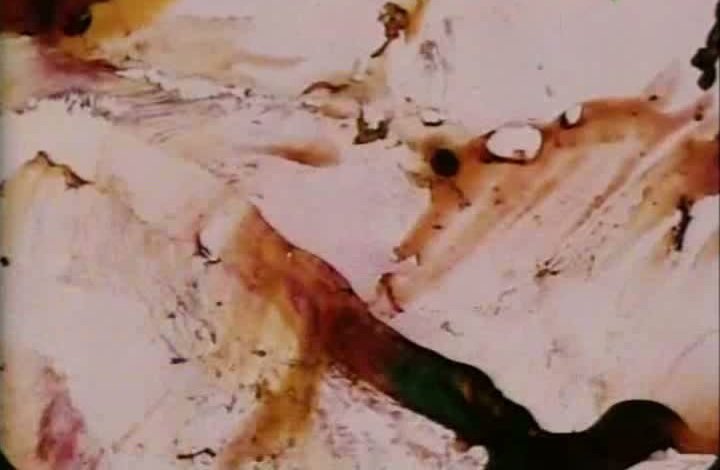 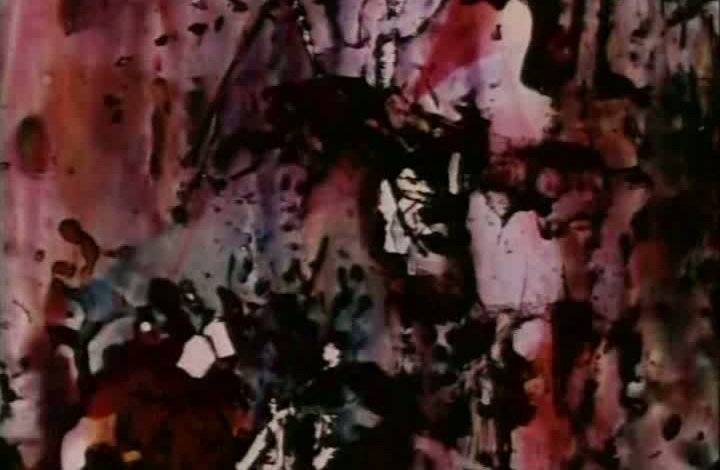 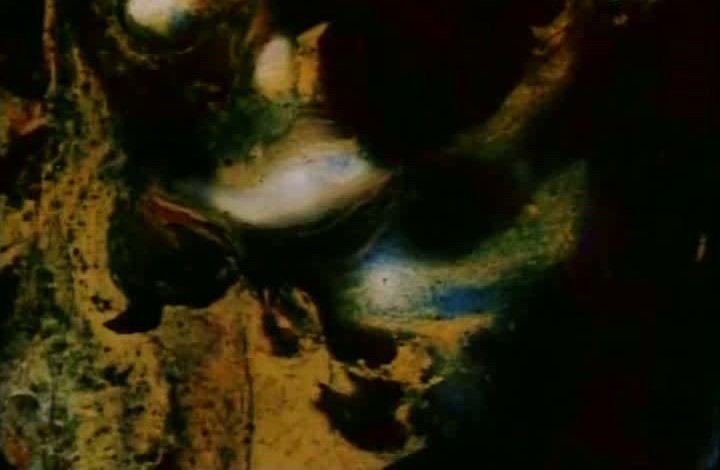 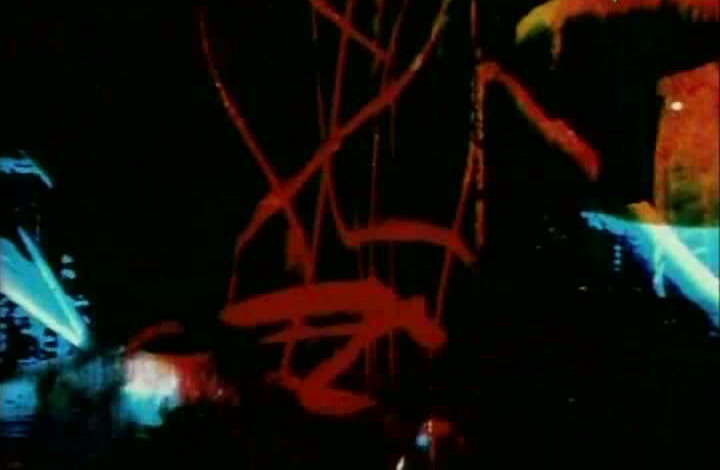 Apart from these elements, there’s another fundamental similarity between Brakhage’s cinema and Persian arts: they are both creations of a highly ordered mind whose innovations crystallize in a mood of personal or social crisis, demonstrating the discipline and beauty in chaos. “The art work defines a paradigm of the experienced chaos of everyday life,” says Brakhage, “while being in itself a construct quite distinct from it.7

Those arts which have inspired the filmmaker are masterpieces of tranquility and wisdom produced during centuries of military attacks, occupations, wars and social turbulence—with the Mongolian invasion of Iran at its peak, which led to the soaring of the art of the miniature.

The spiritual experience might be the most prominent characteristic that relates Persian arts to each other, and might be the essence that has brought a coherent quality to these separated forms of art during the ages cultural fragmentation. Impelled by the same thoughts, Brakhage saw something in the mechanical process of filmmaking that revealed “plethoras of inexplicable and often utterly unexpected visitations.”

In cinema, I cannot think of any film more effective and sublime about Iran and the entanglements of beauty and agony in its history than these 18 short pieces. This historical evaluation includes all the moving images made about Iran by westerners from Raoul Walsh (Esther and the King) to Agnès Varda (Plaisir d'amour en Iran) and Albert Lamorisse (Le vent des amoureux), whether partially talking about Iran or fully, treating it fictionally or depicting it in a direct realist approach.

During the last years of his life, Brakhage found in that land something that truly “prompt[s] a chaotic display of illumination into vision”8 and he scratched every little bit of it on the celluloid stripe.