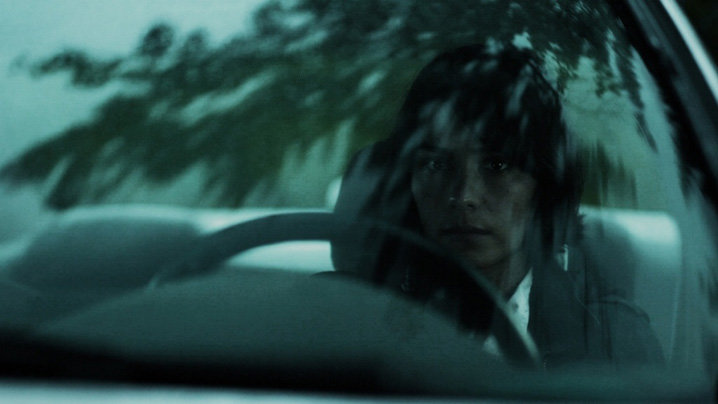 To Hellman and Back: An Evening with Monte Hellman is set for this evening at the Walter Reade Theater, and here's how the New York Times' Dave Kehr recommends you be there if you can: "The undisputed master of the existential road movie (Two-Lane Blacktop, 1971) will be present for a 6 pm sneak preview of his new feature, Road to Nowhere, to be followed by a rare screening of Mr Hellman's magnificently bleak adaptation of Charles Willeford's novel Cockfighter, starring Warren Oates as an itinerant gambler. A discussion with Mr Hellman follows the screening, as does a book party celebrating the reissue of the Willeford novel from PictureBox Books."

"Combining an almost quaint self-reflexiveness with state-of-the-art digital filmmaking, Road concerns the production of a film based on a controversial lovers' double-suicide in North Carolina," explains Nick Pinkerton in the Voice. "Director Mitchell Haven (Tygh Runyan) is determined to have a young undiscovered (Shannyn Sossamon) for his lead — unaware that he's actually cast the True Crime character's real-life basis, living incognito after faking her death. Sossamon, with her geometric elegance and placid voice, is a captivating muse — especially good are her scenes running lines with co-star Cliff De Young. While juggling Mitchell and his star's on-set affair, the interference of a conspiracy-minded blogger (Dominique Swain) and rockabilly insurance investigator (Waylon Payne), and sundry international intrigues, Road remains a purposefully immobile, downbeat 'thriller.'"

Jim Ridley, writing for the Pitch: "Lovingly scripted by Hellman's longtime collaborator Steven Gaydos, the movie is hampered by a cast that sometimes resembles stand-ins, and by camerawork that's impressive mostly for its low-budget resourcefulness. (It was shot using the digital video function of what is essentially a Canon still camera — a next-step threshold in micro-budget moviemaking but a mixed bag aesthetically.) Still, from the tantalizing first shot on, Road to Nowhere buzzes with allusions and meta-movie gamesmanship, giving the 78-year-old director, at long last, a project that fuses his art-house sensibility and his Roger Corman-honed run-and-gun smarts. After two decades of thwarted efforts on Hollywood's road to nowhere, it's heartening to watch this undaunted maverick plow his own off-ramp."

David Fear in Time Out New York: "Calling Road to Nowhere a noir is like referring to Hellman's cult classic Two-Lane Blacktop (1971) as a road movie: Technically correct genre assignations hardly do justice to either work's existential ennui and elliptical, Euro-jagged style. The Corman alum's signature moody bluesiness almost makes up for the way his suspense flick continually trips over its own loop-the-loops, and for all of Hellman's hat tips to bygone film eras — cue shoehorned-in clips of The Lady Eve and The Seventh Seal — the genuine homages seem to be directed toward David Lynch's surreal Dream Factory nightmares. The Mulholland Drive director would have properly realized this nugget's potential to become a true Pale Fire of B-movie pulp fictions, however. Plus, he would have included dwarves."

The New Yorker's Richard Brody: "Road to Nowhere, unlike the spate of micro-budgeted films that have been the jewels of the recent independent cinema, is made by a director with Hollywood experience and Hollywood wiles. In the film-within-a-film of Road to Nowhere, the camera is the size of the palm of the hand, but there are trailers on location to which actors withdraw between takes, and they complain to their agents when their part changes in the course of the shoot. The silently energetic opacity of the Hollywood icons and neo-icons whose hard-edged wisdom informs Hellman's films has little to do with the loose, documentary-centric performance style of younger directors' micro-budgeted films; yet, for Road to Nowhere, Hellman clearly had trouble getting actors as charismatic and as intense as his own directorial presence. It's not an off-Hollywood film, it's a part-Hollywood film, and, like many hybrids, its parts fit together uneasily. There's little pleasure to be derived, for instance, from the leaden dialogue… yet Hellman's reflexive modernism, a sleek insulation for burning passions, is the very image of joyful artistic idealism in the face of bitter worldly wisdom."

Back in May, Kevin Thomas spoke with Hellman for the Los Angeles Times: "Of his two-decades-plus absence from feature filmmaking, Hellman sums it up as being in 'development hell.' He was busy, he says, teaching two years at USC, six more at CalArts, executive producing Reservoir Dogs for Quentin Tarantino and struggling to get numerous projects of his own off the ground. He's currently working on his next project, called Love or Die. 'This is going to sound terrible, but in a lot of ways I feel like Road to Nowhere is my first movie — everything else before it was a rehearsal.' … Asked if it was a matter of feeling at last in total control, he replied, 'Just the opposite. This movie seemed to have a mind of its own — it seemed to know better. I'd make a choice, fail and then wind up with something better.'" 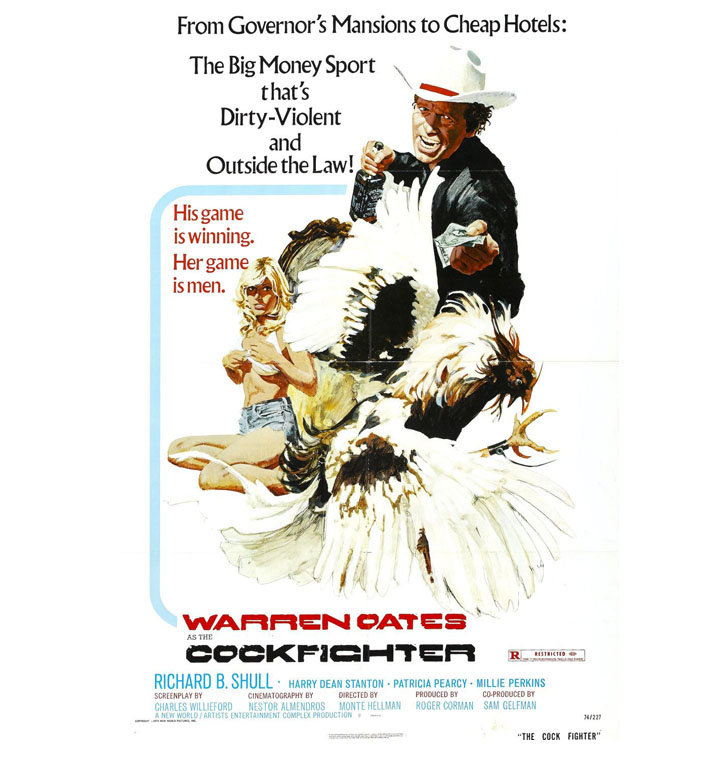 Earlier: Reviews from Venice. Alt Screen, meantime, has a roundup on Cockfighter. Updates: Listening (48'49"). Mike White and Mondo Justin talk with Hellman about Flight to Fury (1964) and Road to Nowhere, but also "about low budget film making and the mystical healing power of Jack Nicholson."

Updates, 6/9: "Hellman plays the story disappointingly coy," finds Steve Erickson, writing at Gay City News. "He overdoes the 'is it real or film?' effect. Initially, the device is playful, but it quickly becomes irritating." Besides all the references to other films, Road features "a final shot that imitates the lengthy zoom in Michael Snow's avant-garde classic Wavelength. It's a shame that none of this inspiration amounts to much more than an indie version of the layers of illusion and reality in sci-fi blockbusters like Christopher Nolan's Inception and the Wachowski brothers' The Matrix."

At the BOMBlog, Craig Hubert sets Cockfighter next to Dennis Hopper's Out of the Blue (1980).

Updates, 6/10: For the New York Times' Stephen Holden, "if Mr Hellman's movie only partly fulfills its promise as a gripping neo-noir mystery, his stylistic hallmarks lend it a singularly haunting atmosphere. The long static shots of the characters barely moving, the expressive use of color (especially dark blue) and [Tom] Russell's songs (another lyric alludes to 'the movies in our hearts') build a mood of brooding intensity. The fraud being examined is actually pretty banal. What's being explored isn't the crime itself but the relationship of a filmmaker to a project in which he gets lost. As exciting as it may be to become swept up in your own brainstorm, Road to Nowhere suggests you would be a fool not to resist."

Michelle Orange on Road for Movieline: "Each clever turn feels like a revolution away from greater understanding, part of a daring game that goes on too long for interest in the outcome — and, more fatally, in the characters — to last."

Reviewing Road at the AV Club, Keith Phipps touches on what's become a common association: "The tone and subject at times recall David Lynch's Lost Highway and Mulholland Dr, but the approach is Hellman's own. As Sossamon prepares to take a meeting, the camera lingers on her as she laces up her shoes and fixes her hair, as if the preparations meant as much as the encounter itself. It's possible, even likely, that viewers will leave Road to Nowhere with a much better understanding of the characters than the plot. Dreamers, after all, have more shape than their dreams."

At Twitch, Dustin Chang finds Road "absolutely... dreadful. There I said it."

The week-long DocPoint NYC, spotlighting Finland, opens today. Lauren Wissot has an overview of a few of the highlights at the House Next Door, while, in the Voice, Michael Atkinson writes up a quick take on Joonas Neuvonen's Reindeerspotting: Escape From Santaland.

Also in the Voice, Martha Schwendener on films by Chris Kraus screening at Real Fine Arts: "Given Kraus's stature as a writer, and the savage humor, intelligence, and ingenuity (yes, there's some judgment for you) of the film work, it could've appeared at P.S.1, at the very least…. Instead, it's mounted in a small gallery run by artists Tyler Dobson and Ben Morgan-Cleveland, a kind of 90s Berlin-outpost enterprise — or, as an earlier RFA reviewer wrote, Alan Belcher and Peter Nagy's conceptually driven, post-media Nature Morte Gallery in the East Village, circa 1982."

"Taiwanese director Zero Chou is one of the more interesting talents to emerge in recent world cinema," finds Christopher Bourne. "A former journalist who moved into documentary filmmaking in the late 90s, she is also, by all indications, the only openly lesbian filmmaker in Taiwan.  She works very closely with her life partner Hoho Liu, who also serves on her films as cinematographer and co-editor. Chou has a distinctively allusive style that freely shifts between realism, dream imagery, and fantasy, an intensively sensual eye that is attuned to human desire in all its forms, with a special sympathy for those who exists on society's margins. She has been deservedly acclaimed for her films: Splendid Float won the best Taiwan Film award at the 2004 Golden Horse Film Festival, and Spider Lilies won the Teddy Award for best LGBT themed film at the 2007 Berlin International Film Festival. Five of Chou's features will screen from June 7 through the 30th at the New York Public Library for the Performing Arts, in a series called Breaking the Waves: The Films of Zero Chou, organized by the Taipei Economic and Cultural Office in New York."

A wide range of work by Rene Daalder will be screening at Anthology Film Archives from this evening through Sunday. L Caldoran previews the series at Cinespect.