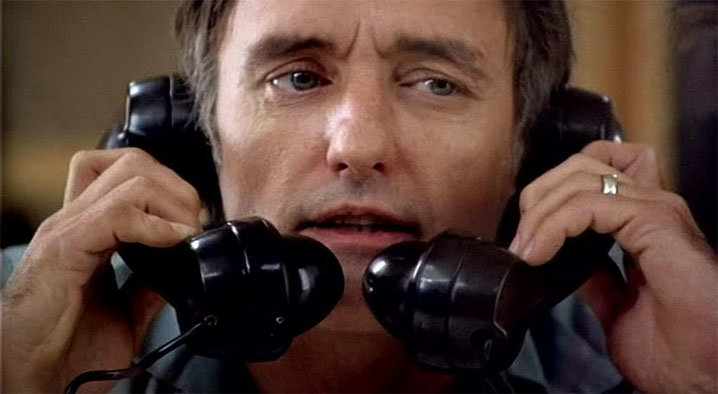 Let's begin this quick run through goings on in New York and with J Hoberman in the Voice: "Dennis Hopper changed the game with Easy Rider (1969), blew up his career with The Last Movie (1971), and then, through a never clearly explained series of events, took over and reconfigured a Canadian tax-shelter project for which he had been hired to act, thus contriving a dialectical comeback with his brutal, accomplished Out of the Blue (1980)."

"Widely banned and/or shoved under the rug at the time of its limited release primarily due to its violently bonkers ending, the film's alternately herky-jerky and languid cadence is suggestive of a terminally wounded body undergoing a death rattle." Joseph Jon Lanthier in Slant: "This produces a look and feel that communicates the blind rage and ennui out of which punk's jabby power chords and raucous lyrics sprang. But the film's punk apotheosis — the just-barely adolescent protagonist Cebe (Linda Manz) — is so flimsily fashioned out of guesswork and fetishism that the drama can't be taken seriously as depiction or summation of that era's anger."

For Time Out New York's Keith Uhlich, Hopper's "punch-drunk spontaneity is a good fit for material that, in other hands, could have been lurid and insufferable." Cebe's mother (Sharon Farrell) "is a nympho drug addict, and her father (Hopper) is a deadbeat who's just finished up a jail term for crashing his truck into a school bus full of children (we see truly frightening flashes of the accident throughout). And the tragedies don't stop there."

"Out of the Blue makes even the most graphic new releases seem so utterly tame," finds Michael Tully in Filmmaker. "[I]t has the feel of having been taped back together after being discovered in a pile of burned wreckage. But that's what gives Hopper's coming-of-age tour-de-force its furious, raw power." For the New Yorker's Richard Brody, "if the fervent acting occasionally overheats, the reckless emotions nonetheless convey the authentic struggle of personal experience." And for the Voice, Nick Pinkerton calls up Linda Manz. Out of the Blue is at Anthology Film Archives for one week. Trailer. 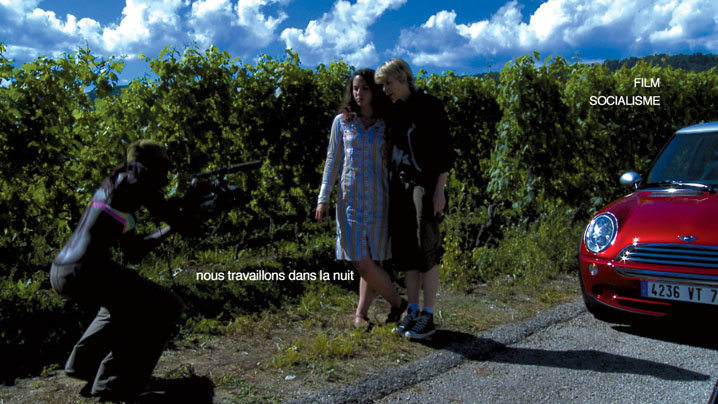 "The McGuffin of Jean-Luc Godard's new film, Film Socialisme," argues the New Yorker's Richard Brody (more and more), "is the vast store of gold that the Spanish Republicans shipped to the Soviet Union in 1936, ostensibly for safekeeping during the civil war (of course, it never came back), and, in particular, the batch of it that disappeared en route to Odessa. Yet the gold is more than a McGuffin: it's a frequent subject of discussion, an object that lends the entire film its thematic and symbolic value, and the source of the movie's elaborate backstory — and it has been on Godard's mind for almost thirty years." He explains.

"Godard does what he does," declares Glenn Kenny at MSN Movies, where he elaborates: "discursive, thickly textured, densely allusive quasi-essay films filled with trenchant observations, plangent complaints, and the torturing of thematic bedbugs and dropping of at least borderline outrageous and/or deeply objectionable comments and characterizations. That's what the viewer gets in Film Socialisme."

It's "an assemblage of vignettes, allusions and tracts, a three-part invention in which music, voices and pictures are arranged in a loose, contrapuntal pattern that is by turns provocative, grating, gorgeous and tiresome." AO Scott in the New York Times: "In typical Godardian fashion the film manages to be both strident and elusive, argumentative and opaque."

"Film Socialisme is both timeless and timely," writes the Voice's J Hoberman. "Nor is that its only paradox. This is at once the most essayistic of 21st-century Godards and the least interested in conventional communication, cinematic as well as linguistic…. Could this gnomic, impacted film-object be the 80-year-old artist's last testament? As if anticipating the possibility, Godard signs off with the words 'NO COMMENT.' Film Socialisme deflects interpretation but, so long as one subscribes to the William Carlos Williams injunction 'No ideas but in things,' it's filled with sensuous pleasures."

Updates, 6/7: First, Christy Lemire and Ignatiy Vishnevetsky's discussion of Film Socialisme on Ebert Presents At the Movies has gone viral. Second, David Phelps presents an English version of a set of annotations that began with a French collective, that was then expanded as it underwent translation into Spanish — and now adds a few notes of his own as well. And third, I've neglected to mention Daniel Kasman's review from Cannes 2010 and the previous roundups: Cannes and New York.

Updates, 6/10: "As with so many of [TS] Eliot's late works, the best way to approach Film Socialism is to ask why Godard has erected this Tower of Babel and what we might stand to gain by staring at it," writes Ben Sachs in the Chicago Reader. "The title can be read as a lament for two utopian ideals (socialism, cinema as pure art), and in fact the movie is haunted by all sorts of lost illusions. It climaxes with various images of war-torn cities, and a recurring theme is whether one can still believe in the myth of Europe as the center of world culture. For all its references to defeat, however, the movie still conveys a sense of rapture with the process of image-making, if not necessarily filmmaking. Godard seems genuinely enthused by all the post-film media of the new century, and Film Socialisme revels in the variety of colors, textures, and editing schemes that make up the digital landscape…. Each shot is so visually expressive that one can easily appreciate Film Socialisme without understanding the heady, heavily thematic dialogue. But that theme — that ideals can thrive in art even when political circumstances make them nearly impossible — is life-affirming."

Ray Pride for Newcity Film: "Film Socialisme is sketch comedy for cineastes (far less dense than the obsessive and potted essay Histoires du Cinéma), those who react to colors and edits and gestural repetitions and thematic fixations, but not those who struggle to cipher a story from fragments." 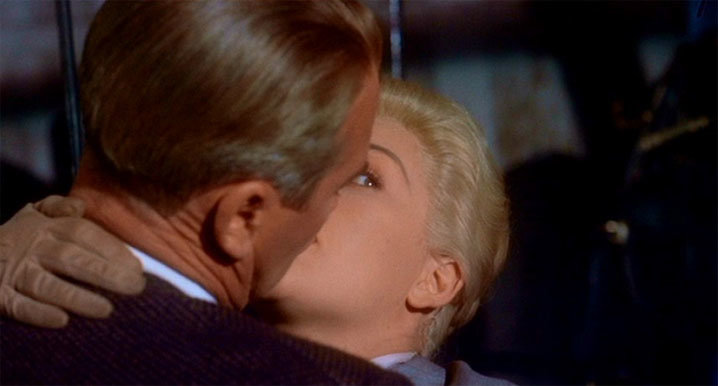 "Vertigo is greater than even the sum of Bernard Herrmann's versatile, indispensable score, its evocative use of San Francisco locations, and Stewart's earnest, anguished performance as the increasingly unhinged John 'Scottie' Ferguson," argues Bill Weber in Slant. "Perverse, poetic, steeped in emotional desolation and destructive obsession, it delivers a fearlessly dolorous view of longing and betrayal in the guise of an acrophobia thriller, making through its classical ambitions (referenced by Herrmann's swelling variations on Wagner's 'Liebestod') and enduring fascinations a splendid case for Hitchcock as a grand experimental artist who labored in commercial genre cinema."

Hitchcock's 1958 masterpiece is at BAMcinématek from tonight through Wednesday, and for Time Out New York's Joshua Rothkopf, "it's a movie about memory that actually improves the more you go over its folds." Meantime, Miriam Bale's plucked out a few favorite quotes from Geoffrey O'Brien's 2006 piece on Jimmy Stewart for the New York Review of Books.

"Like many a classic, Federico Fellini's La Dolce Vita has become nearly impossible to experience apart from its legend," writes Michael Joshua Rowin in the L. "Yet La Dolce Vita lives forever." It is "at heart a melancholic elegy for male integrity that happens to take place during the age of Playboy and the international jet set. Fellini holds together its disparate tones (from eerie and otherworldly to bruised and unsentimental) with precise management of full-to-bursting widescreen compositions (his signature hairpin shifts in background to foreground action begin here) as well as a mind-meld director-actor bond with Mastroianni, who projects his character's elliptical decline into cynicism with a tense, vulnerable reserve." A restored 35mm print screens at Film Forum through June 16. Update: More from Matthew Connolly in Slant (4/4).

"Like Joan Braderman's 2009 doc, The Heretics, Lynn Hershman Leeson's lionizing chronicle of the birth, in the late 60s, and efflorescence of feminist art is motivated by first-person recollection," writes Melissa Anderson in the Voice. "Though her autobiographical asides sometimes disrupt the flow of her interview footage, which she began assembling 40 years ago, !Women Art Revolution moves briskly, unfolding as one lively sit-down after another with artists, scholars, and curators who established themselves at the height of second-wave feminism."

More from David Fear (TONY, 3/5), Rachel Saltz (NYT) and Lauren Wissot (Slant, 1.5/4). Sophia Savage talks with Hershman for Thompson on Hollywood. !WAR is at the IFC Center through June 9.

"Without much fanfare, the summer screening series presented at various outdoor locations by Rooftop Films has become one of the best places to see meaningful new work from independent filmmakers," writes Steve Dollar in the Wall Street Journal. "This weekend finds an impressive trio of works drawn from the recent South by Southwest film festival in Austin, Texas" — and they are Alison Bagnall's The Dish & the Spoon, with Greta Gerwig and Olly Alexander, Cherie Saulter's Florida-set No Matter What and Ian Cheney's "thoughtful and, yes, illuminating documentary The City Dark." 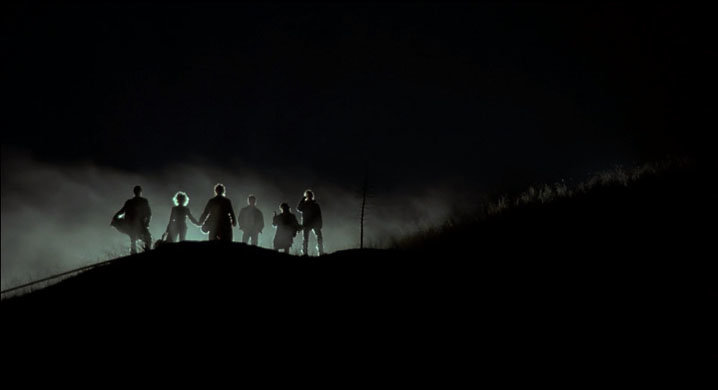 Last week, Steve covered Crafting Genre: Kathryn Bigelow, running at MoMA through August 13. He reminds us that the oeuvre includes Near Dark (1987), appearing "20 years before bloodsuckers became the pop-culture vogue," Point Break (1991), the "tragically misappreciated" Strange Days (1995) and, of course, The Hurt Locker (2010), winning not only a Best Picture Oscar but also the first Best Director Oscar given to a woman. Given all that: "Of unique interest are her earliest films, made after the San Francisco Art Institute graduate enrolled in the graduate film program at Columbia University, where she studied with such luminaries as Susan Sontag and avant-garde video artist Vito Acconci."

Justin Stewart in the L: "Bigelow's precociously slick 15-minute debut film Set-Up (1978) shows two dudes violently fistfighting while two semioticians deconstruct the action on the soundtrack. It sounds like either a microcosm or parody of her filmography in toto, in which she questions the complexities of violence and masculine assumptions. As quickly as 1987, with Near Dark, she had become too skilled as a genre stylist and entertainer for her work to sit comfortably entombed in theory class textbooks."

"Modesty is a virtue for Turkey Bowl, the tale of an annual Thanksgiving touch-football game that exploits concision to its considerable benefit," finds Nick Schager in Slant. For Karina Longworth, writing in the Voice, it's "an ingeniously designed and sharply executed experiment in faux-vérité quasi-improv comedy." Neil Genzlinger in the NYT: "'It's sort of interesting,' you might find yourself saying, 'but is it a film?'" Of course it is, answers Jesse Hassenger in the L: "If Turkey Bowl is light on moments of transcendence, even small ones, it's because [director Kyle] Smith remains so dedicated to his appealingly limited frame." At Brooklyn's ReRun Gastropub Theater.

Back to Melissa Anderson in the Voice: "In a 1977 essay, high priestess of film theory Laura Mulvey praised the melodramas of Douglas Sirk for 'probing the pent-up emotion, bitterness and disillusion well known to women.' Sirk's impossible-love weepie, All That Heaven Allows, starring Jane Wyman as a middle-aged widow who falls for her much younger gardener (Rock Hudson), serves as the urtext of MOMA's clever, ambitious series devoted to this surfeit of feeling — and its dismantling — in an often-overlooked source: avant-garde film and video from the past 70 years." Drama Queens: The Soap Opera in Experimental and Independent Cinema runs from tomorrow through June 19.