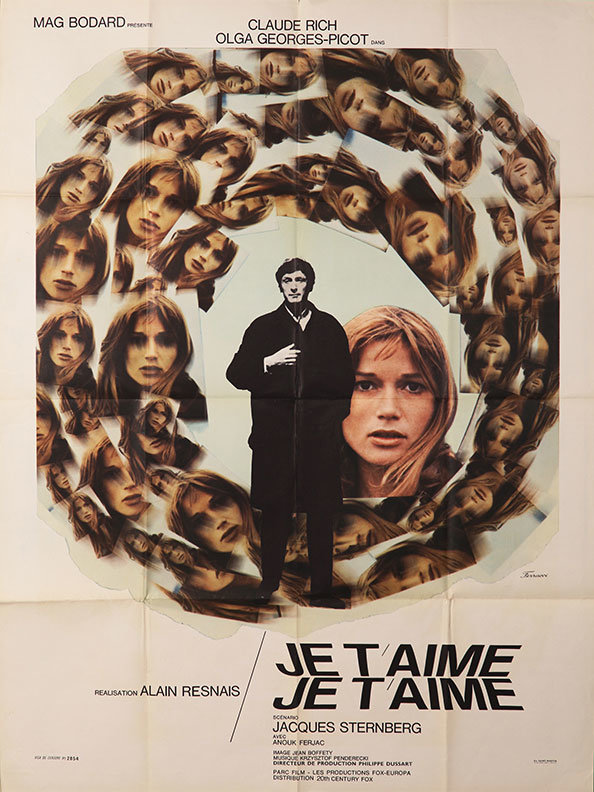 For many years ﻿I’ve been aware of this poster—a classic by René Ferracci, the appointed affichiste of the nouvelle vague—without knowing anything about Je t’aime, je t’aime﻿, a film which has been almost impossible to see for decades. Today, as a Valentine’s Day gift to New York cinephiles, Film Desk and Bleeding Light Film Group are bringing it back to Film Forum in a new 35mm print.

Ferracci, master of the photo-collage, captures the fragmented whirlpool of Alain Resnais’ time-traveling love story in an unforgettable image that would maybe be better known, as would the film itself, if its protagonists had been bigger names. Je t’aime, je t’aime, made in 1968, was only Resnais’ fifth feature film, twenty-two years into his filmmaking career. (Just this week, at the age of 91, he premiered his latest, Life of Riley, at the Berlin Film Festival.) An avowed influence on Michel Gondry’s Eternal Sunshine of the Spotless Mind, and a continuation of Resnais’ explorations into memory and time in Last Year at Marienbad and Hiroshima, Mon Amour, Je t’aime, je t’aime ﻿is a delirious jigsaw puzzle of a movie. A man (Claude Rich), newly released from hospital after a suicide attempt, is recruited by a mysterious organization to be a guinea pig in their time travel experiments. Set up in a module that is half womb and half brain, he is flung back into an cuisinarted version of his recent life that only makes sense, to us, as time goes on. 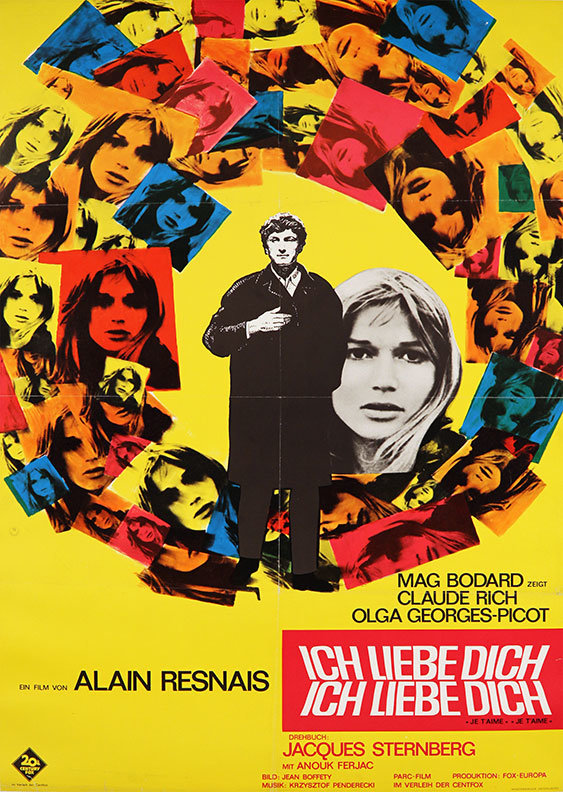 The brooding Italian 2-foglio poster uses Ferracci’s title treatment (in French no less) but places its protagonists as if they are looking at a movie screen in their mind’s eye. The time-travel in the movie in fact very much resembles watching a movie of ones own life, albeit one that has been chaotically reedited. 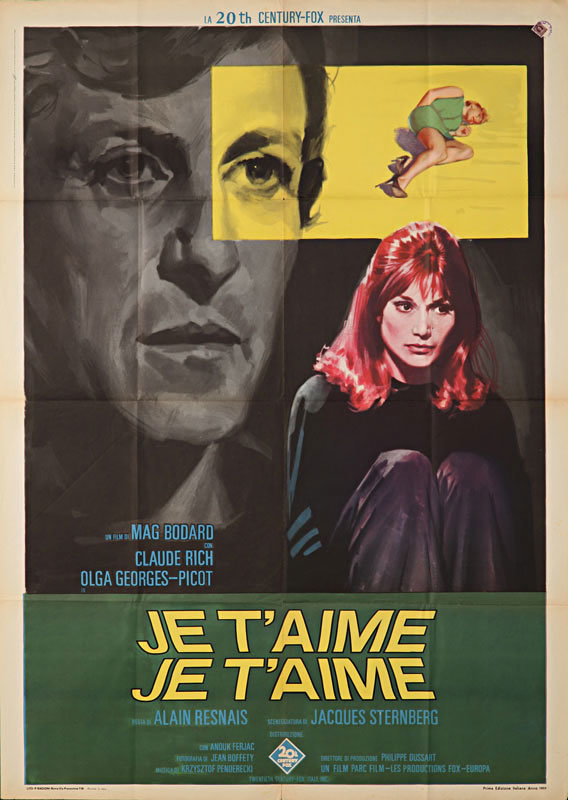 This Spanish-language (maybe Argentinian) poster is markedly different in style and tone, making the film—Te Amo, Te Amo—look like a softcore romcom. 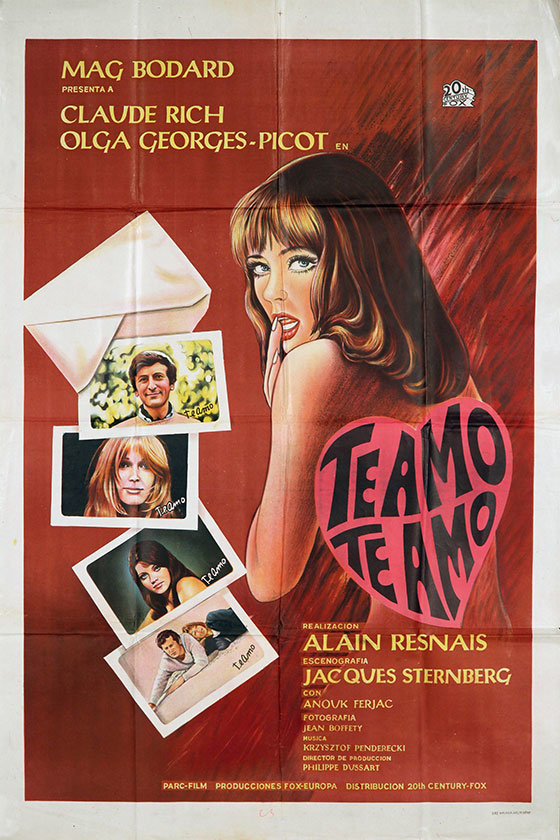 I’m not sure where this other Spanish-language poster ﻿is from and what it was used for. It notably mentions the screenwriter Jacques Sternberg rather than Resnais. 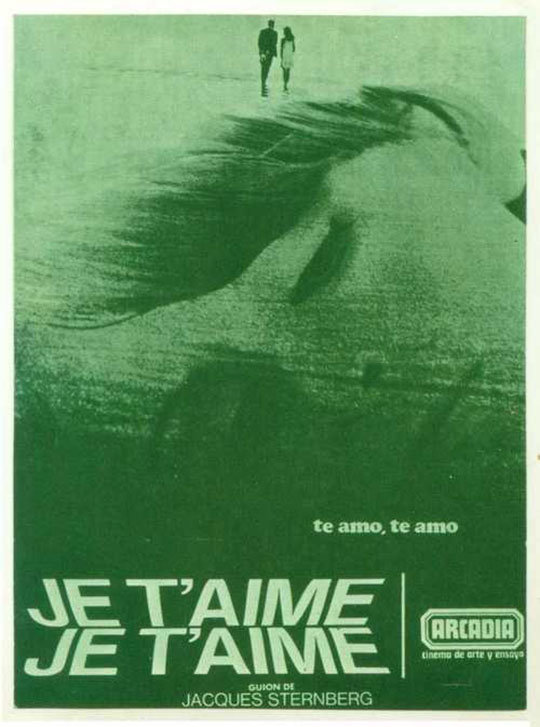 Intended to be in competition at the 1968 Cannes Film Festival, which was famously shut down in sympathy with the student protests and general strikes of that year, Je t’aime, je t’aime﻿ didn’t make it to the New York Film Festival until 1970 and was only given a limited US release two years after that. This ad for the film from New Yorker Films is the only promotional piece I’ve seen that focuses on the sci-fi aspect over the romance: a photo of the blob-like time-travel machine rather than Olga Georges-Picot’s face. 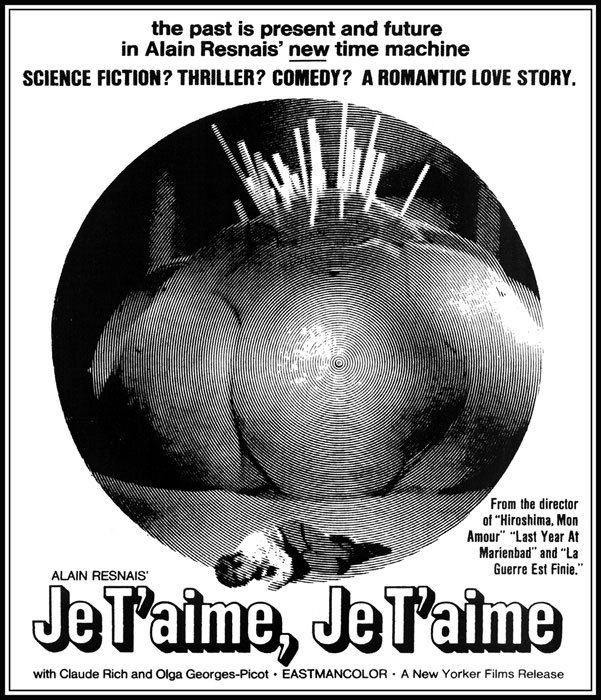 Je t’aime, je t’aime opens at Film Forum today. Many thanks to Brian Block of Bleeding Light Films and to Mike Olenick for the posters.﻿

You can see my previous posts on Alain Resnais’ films and posters here and here.