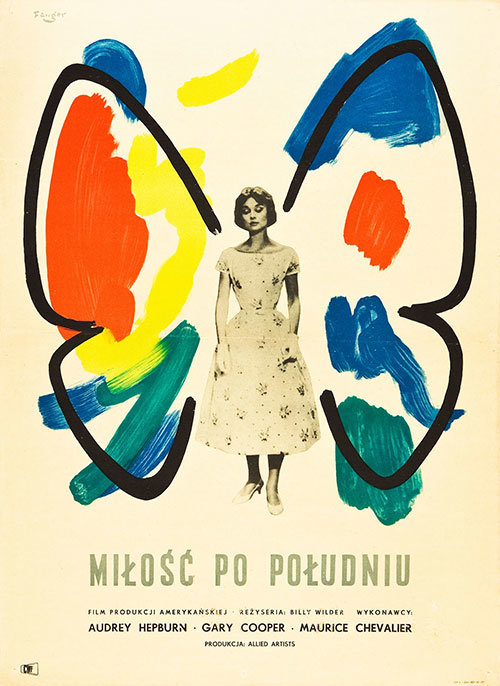 I’ve always loved this Polish poster for Billy Wilder’s Love in the Afternoon, with its ethereal collage of photography and daubs of paint (not to mention perfectly tasteful type), and I knew that its designer, Wojciech Fangor, had designed a number of other posters in a similar style. But until I started looking into him for Movie Poster of the Week, I had no idea that he is one of Poland’s pre-eminent artists and is still alive and well at the age of 90. Not only that, but he is currently being fêted with a major exhibition, titled Space as a Game, at the National Museum in Krakow (it closes tomorrow if you’re lucky enough to be in the vicinity).

Born in 1922, Fangor was reared on the paintings of Picasso, Matisse and Léger that he would see on museum visits with his mother. But when, in 1949, the Polish authorities declared that Socialist Realism was the only permissable art form, Fangor answered with three of the most famous paintings in Polish history: Figures (1950), Korean Mother (1951), and Lenin in Poronin (1951). 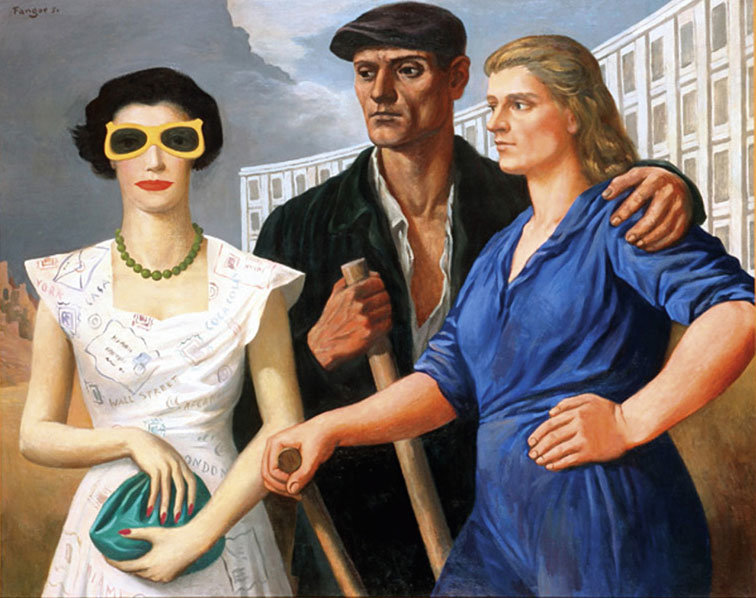 Above: Figures, a 1950 painting by Wojciech Fangor. 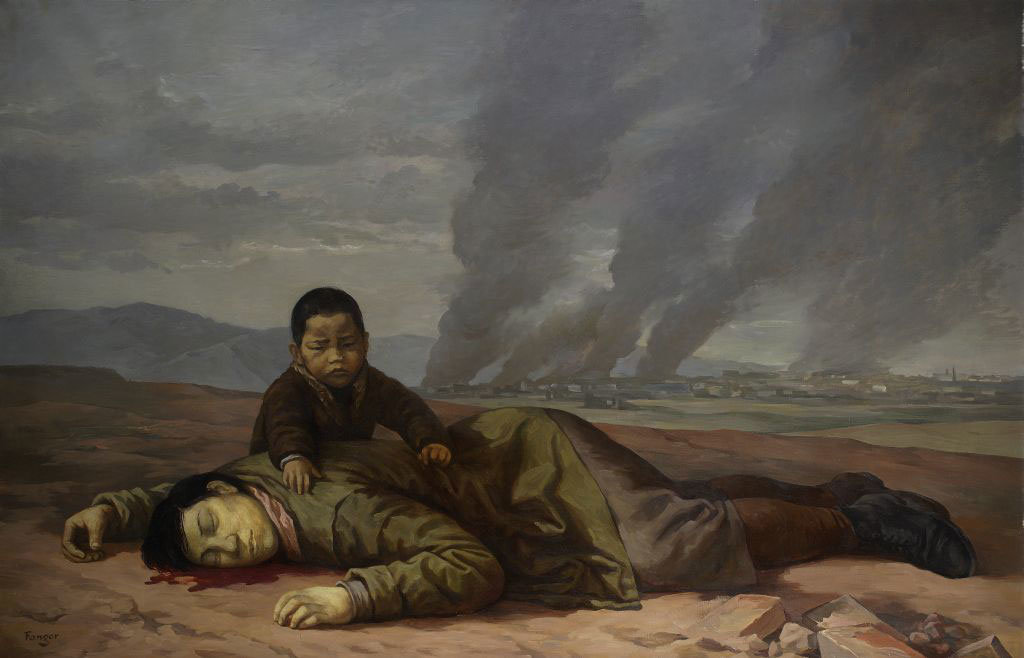 Finding Socialist Realism to be a dead end, and prohibited from exploring other forms in fine art, he turned to graphic design. His first poster, for René Clément’s Walls of Malapaga, is remembered in Poland as one of the first great Polish movie posters. While not particularly remarkable today,﻿ especially in comparison with his later work, it’s fascinating to compare its composition and style to Figures, above. 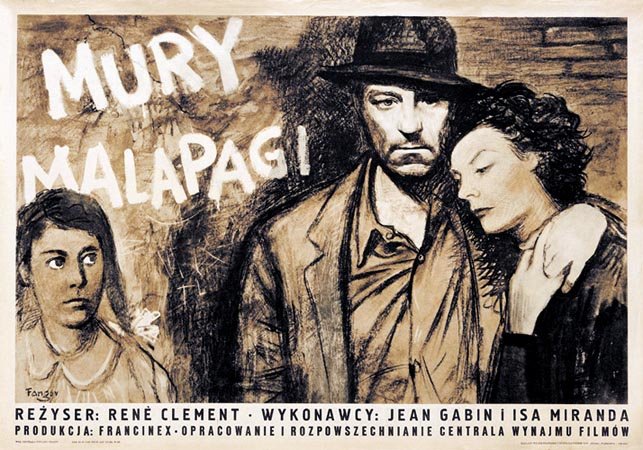 In 1955 Fangor was commissioned by the Warsaw authorities to create—in collaboration with another founding father of the Polish cinema poster, ﻿Henryk Tomaszewski—gigantic modernist decorations for the World Meeting of the Youth, a project which no doubt helped to free him from the shackles of Socialist Realism.

By the late 60s and early 70s Fangor had become a major figure in the world of Op-Art, with his series of blurred circles and shapes. And from 1966 until 1998 he lived and worked in America, becoming, in 1970, the first Polish artist to have a solo exhibition at the Guggenheim. 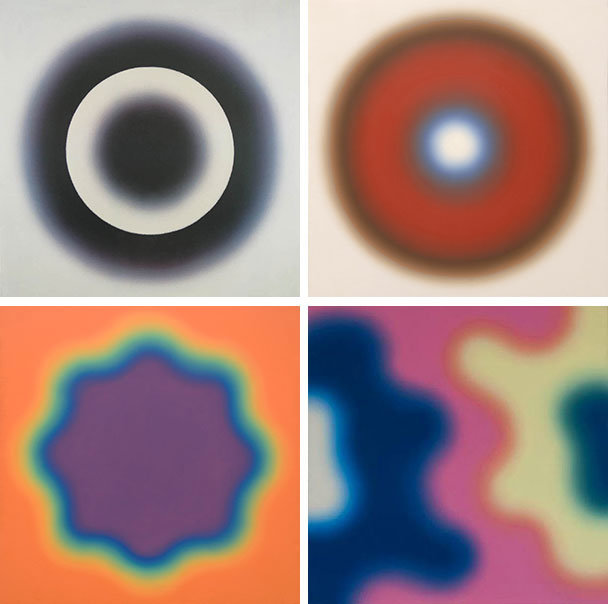 But it was in between the Socialist Realist phase and the Op-Art paintings in America that Fangor produced close to 100 cinema posters. The best of these, like the Love in the Afternoon poster, combine realism and abstraction in marvelously inventive and witty ways. I have collected the best examples below. 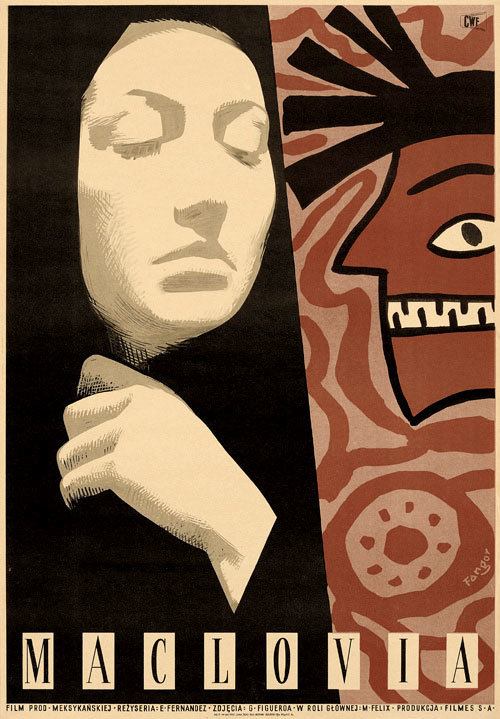 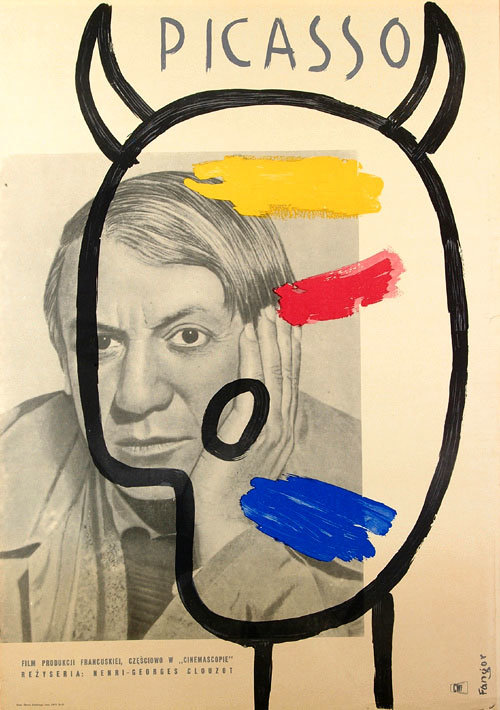 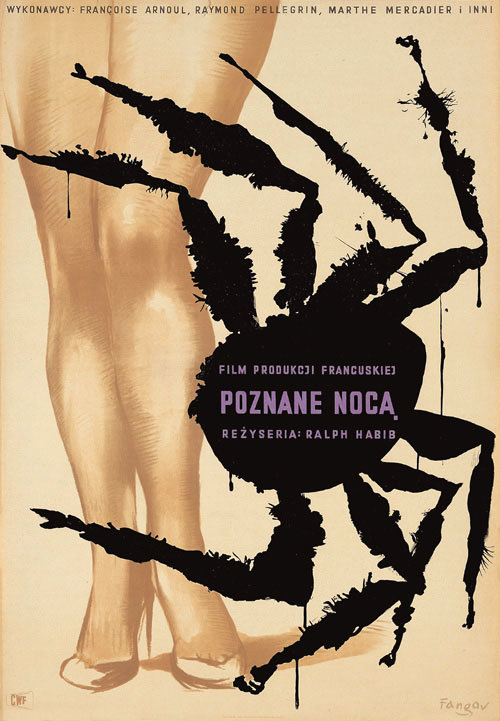 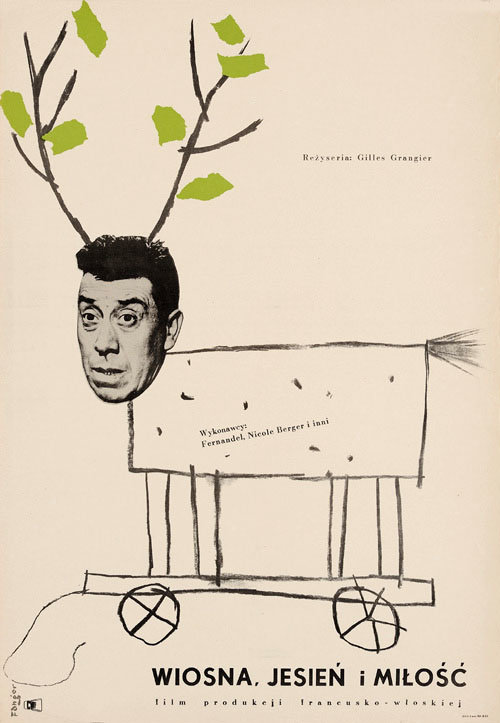 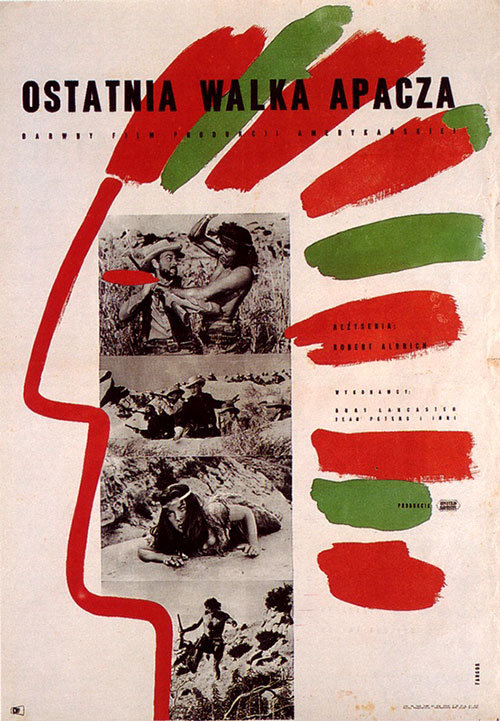 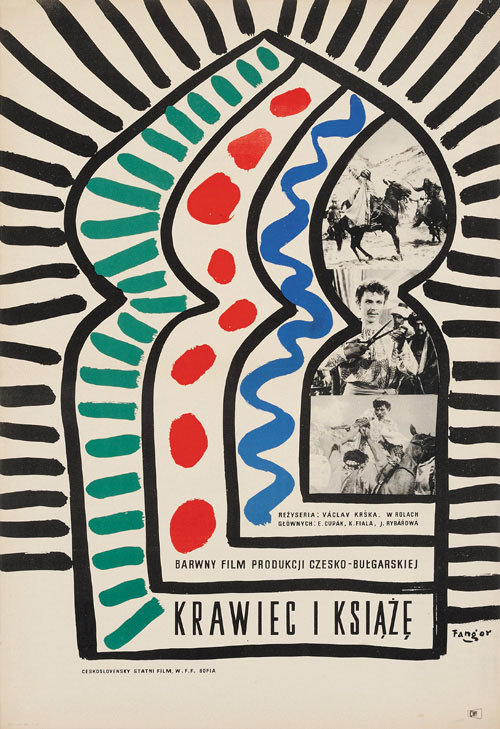 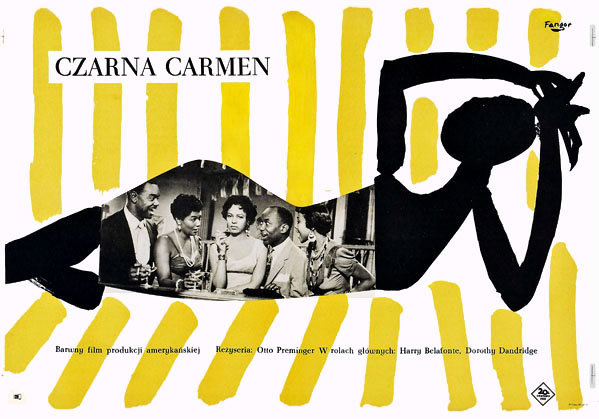 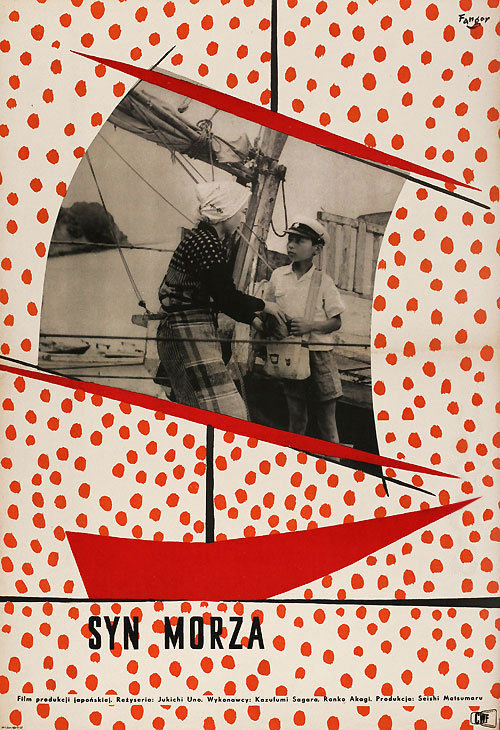 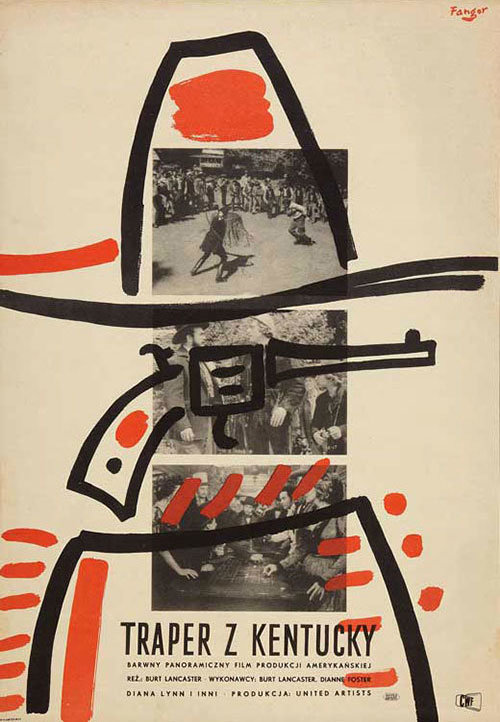 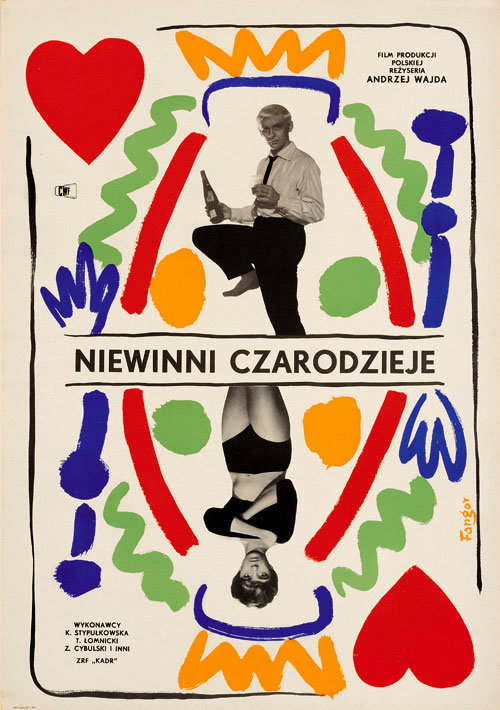 Fangor’s posters are an obvious bridge between his work in realism and abstraction, and apparently the Op-Art paintings came as a direct, yet accidental, result of his poster work. He had started to experiment with painting figurative objects (in place of the photographic cut-outs) on a background of more and more abstract and diffuse forms. When he discovered the optical effect that resulted he decided to remove the figurative elements entirely, and later called his discovery a “positive illusory space.”

In the years since, Fangor’s work has continued to evolve in painting, architecture and sculpture﻿, making him one of the most protean of modern artists. Since 2007, the year he turned 85, he has been working on the design of a new line of the Warsaw subway, decorating 6,000 square meters of wall space at seven different stations.

You can watch an unsubtitled tour of his current exhibition here and a subtitled interview with the artist here.

Posters courtesy of the Polish Film Poster Picture Archive, The Art of Poster and Terry Posters.

Meanwhile, anyone who read my piece about the “hand-knitted” Sightseers poster last week should check back and read the postscript in which all is revealed.