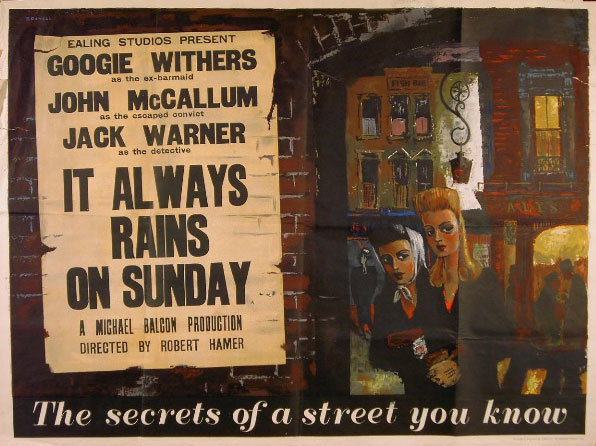 A couple of months ago I wrote about the British artist Edward Bawden and his posters for Ealing Studios. The other day I stumbled upon this evocative and quite unusual poster for the 1947 Ealing noir It Always Rains on Sunday. Though I know the film I’d never seen the poster before and it started me looking into the story of its artist, one James Boswell. Like Bawden, Boswell not only did a handful of posters for Ealing but he also was stationed in Iraq during World War Two and produced a significant body of work from his time there. Whereas Bawden was an official war artist, however, Boswell, because of his famously left-wing sympathies and anti-war philosophy, was not. In fact, a book of his Iraq and other wartime paintings is called James Boswell: Unofficial War Artist.

Born in New Zealand in 1906, Boswell came to Britain to study painting at the Royal College of Art in 1925. He was becoming a painter of some renown when, in 1932, he joined the Communist Party and gave up painting for the more utilitarian disciplines﻿ of illustration and graphic design. From 1934 to 1938 he was art editor and one of the major illustrators for the Left Review, contributing satirical anti-fascist cartoons aimed at the Nazis and their appeasers. At the same time, somewhat incongruously, he was working as Art Director of the Publicity Department of Shell Oil (then known as the Asiatic Petroleum Company).

In a 2006 article on Boswell’s paintings in the Guardian, William Feaver writes that “while working for Shell by day...and at night for himself, he drew away from the George Grosz idiom to a thoroughly Londoner manner: pinched people in tatty street markets, sly looks exchanged at the entrance to the gents on the corner of Shaftesbury Avenue and the Charing Cross Road﻿” which evokes a style that can definitely be seen in the poster above.

In 1941 he was called up by the Royal Army Medical Corps to serve in World War II, eventually spending a year in Iraq. During that time he painted desert landscapes, drew observational sketches of the daily drudgery of his fellow soldiers, and made a series of satirically grotesque anti-war drawings. According to Feaver “He let himself go on Daliesque atrocities, drawing a Shaiba of caged souls, tanks and planes crashing through gigantic bodies, stranglings and impalings, eyes thumbed by faceless thugs.﻿”

Back in London after the war he quit Shell and, newly apolitical, became the Art Editor (for “four very crazy drunken years”) of the highly influential Lilliput magazine. It was around this time that the Head of Marketing at Ealing Studios, S. John Woods (see yesterday’s Movie Poster of the Day), commissioned him to design the poster for It Always Rains on Sunday. His design led to a series of paintings called ‘Camden Girls’ (even though the film takes place in Bethnal Green in East London, not Camden Town in the north).

Feaver writes “After Iraq, life in London—for him Kentish Town, Camden Town, Soho—was a joyous restorative of boozers and spivvery, rationing circumvented and, in the offing, a glorious welfare state. Eventually he was to concentrate on painting...but for a time he was a prime fixer of the image of postwar Britain.﻿” 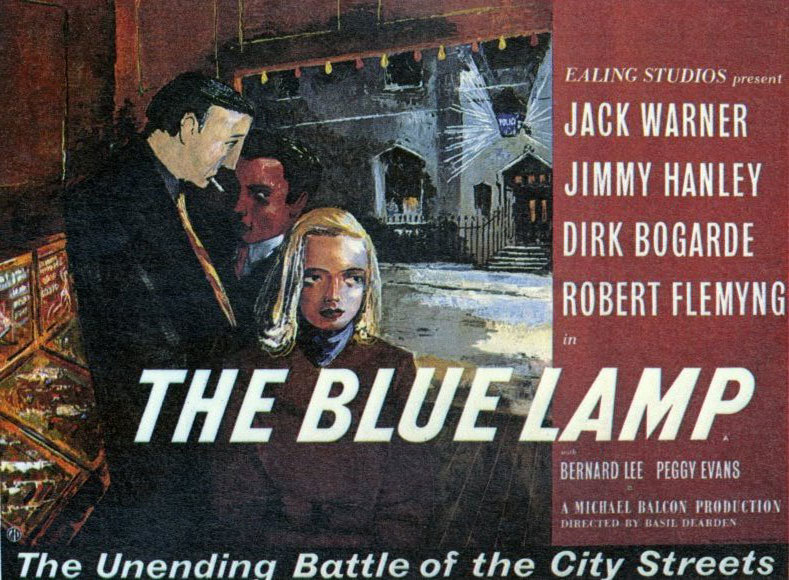 As far as I can tell, Boswell illustrated three other Ealing posters in this period: for the crime thriller The Blue Lamp (1950), and the less well known Pool of London (1951) and The Rainbow Jacket (1953). His first three posters are all of a kind: nocturnal, sinister, mysterious; conjuring up atmosphere rather than representing actors’ likenesses or recreating specific scenes. Boswell was obviously chosen by Woods for Ealing’s grittier outings, their urban thrillers rather than their quaint village-set comedies, but, in another Guardian article, this time about the Sunday poster specifically, Andrew Pulver recounts that, according to Boswell’s daughter Sally, “Ealing’s increasing success got to Boswell—he especially disliked having to illustrate the racing film The Rainbow Jacket in the early 1950s, and the commissions dried up.﻿” 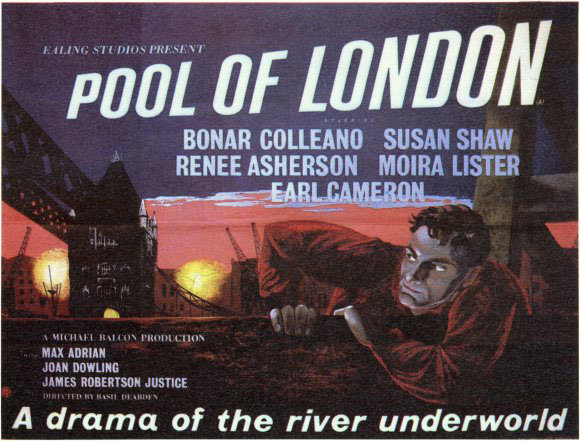 The official James Boswell website, which seems to have been set up for his centenary in 2006 when he was feted with exhibitions all over London (much of his work is in the permanent collection at the Tate), has no mention of the film posters at all, which seem to be a footnote in a varied and prolific career. But I love the story that Sally Boswell tells Pulver: “As a 12-year-old, she recalls, she made her own contribution to the finished design, colouring in some of the torn-paper effects Boswell had drawn for the title placard, plastered on brickwork at the top of the painting. ‘I can see what I did every time I look at it.’” (He also adds that “﻿﻿She would love to still own one of the Camden Girls, not least because the original poster artwork has been lost.”)

In the mid ’50s, and until his death in 1971 at the age of 64, Boswell rededicated himself to painting and especially to abstract art, though in 1964 he returned briefly yet defiantly to graphic design, and to left-wing politics, by designing the campaign that helped bring Harold Wilson and the Labour Party to power.

Boswell’s It Always Rains on Sunday﻿ posters are much sought after. The quad size (30" x 40") can be purchased for a mere £2,500 from UK dealer Greg Edwards’ Rare Film Posters (the source of the image above), while a smaller (22" x 28"), nearly identical but differently rendered version, seen below, is $2000 from Walter Film in Los Angeles. 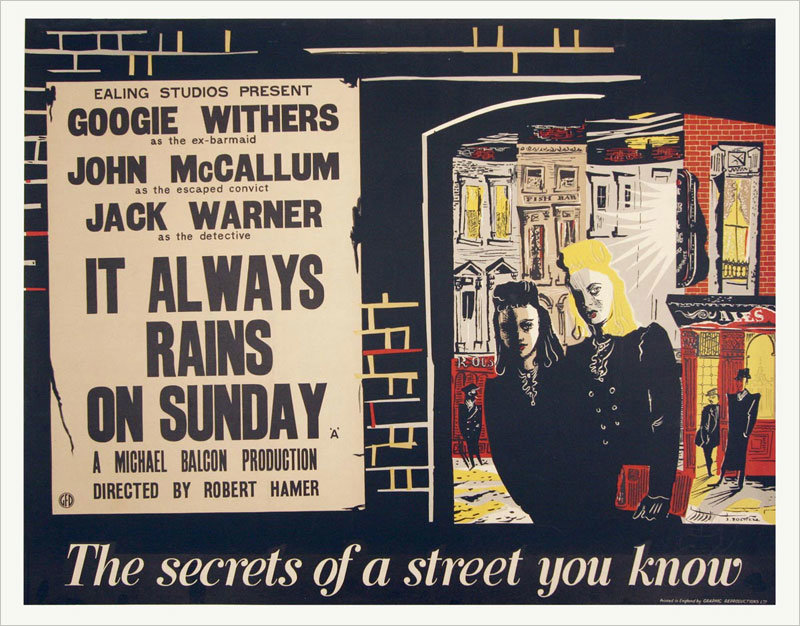 Meanwhile Posteritati has this enormous six-sheet (81" x 81") for the film that was Boswell’s final commission, The Rainbow Jacket, selling for only $350﻿. I’m just assuming, based on his daughter’s anecdote﻿, that this is a Boswell illustration although it’s unsigned and doesn’t exactly look like his style. 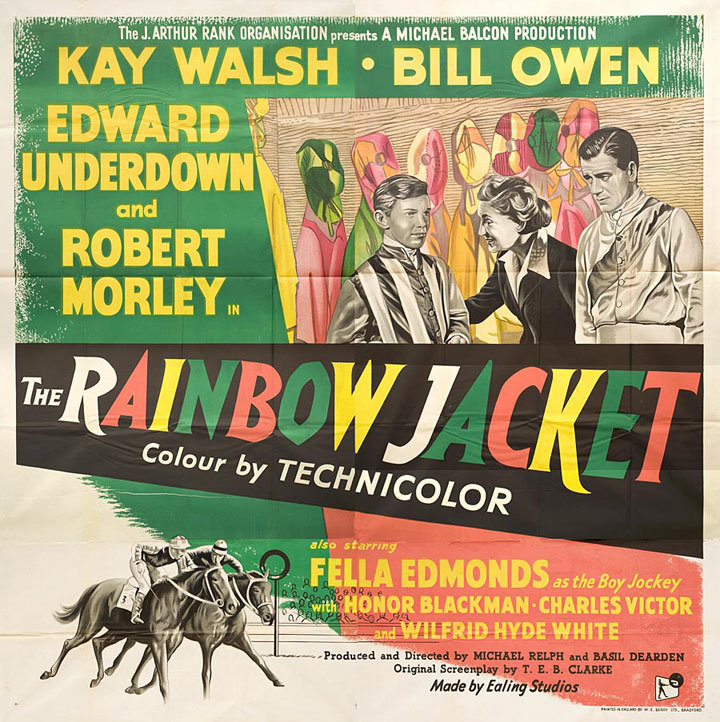 Footnote: Another century, another Iraq war, another artist: In 2003 Shame director Steve McQueen was appointed the official UK war artist in Iraq though he eventually spent only six days there. Read an article about McQueen’s Iraq sojourn and the resulting artwork here.