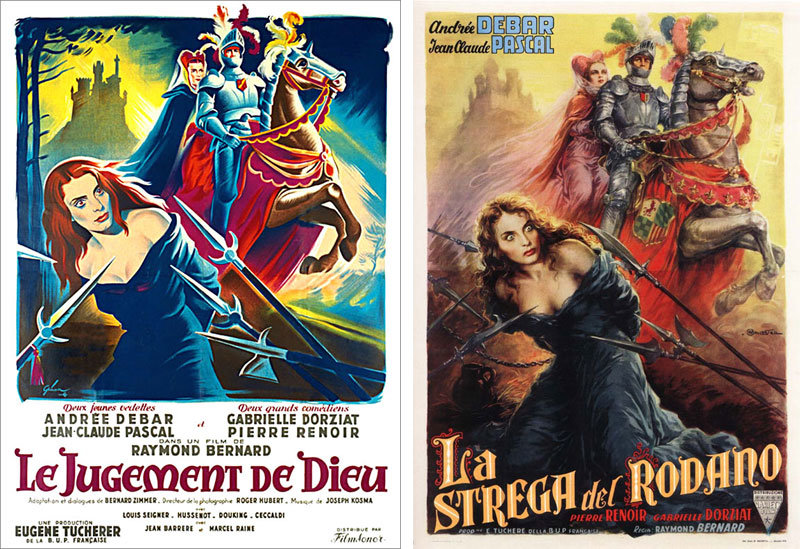 ﻿These two posters for the same film—compositionally identical but stylistically so different—are the work of two of the greatest and most prolific poster artists of the 20th Century: the Russian-born, French-naturalized Boris Grinsson and the Italian Anselmo Ballester.﻿

The film in question, Judgment of God, is a medieval drama based on the 15th century German legend of Agnes Bernauer, a commoner who married a Bavarian Prince and was accused of witchcraft by his disapproving father. Released in 1952, it was d﻿irected by Raymond Bernard (1891-1977), who is best known for his 1924 Miracle of the Wolves (another medieval saga). The Criterion Collection, who released two of his 1930s films under their Eclipse label, calls Bernard “one of the greatest and least-known directors of all time.” 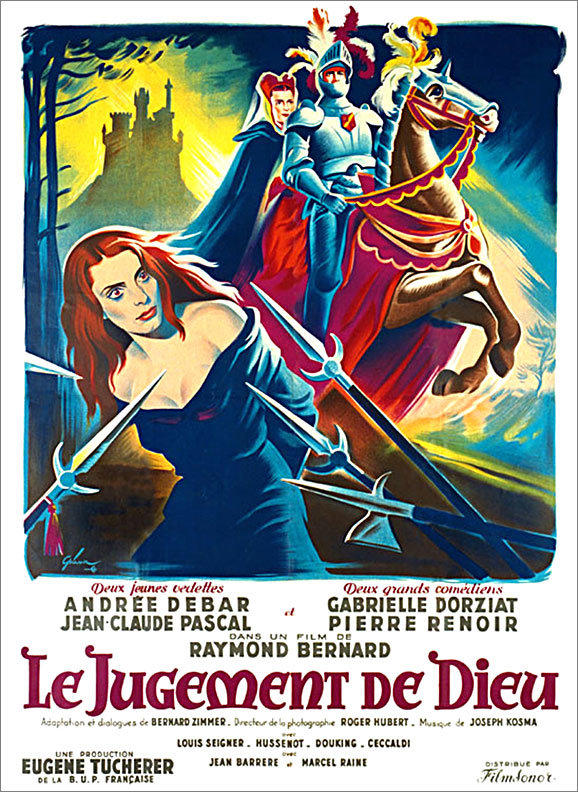 The two posters were either based on the same production still—though to me that seems unlikely since it seems to be a composite image—or one was an adaptation of the other, albeit in a notably different style. The likelihood is that the French poster would be the original, since it was a French production, with the Italian release coming months or years later, but there is no real way of knowing for sure. (There is also a Belgian version which is certainly copied directly from Grinsson’s design). 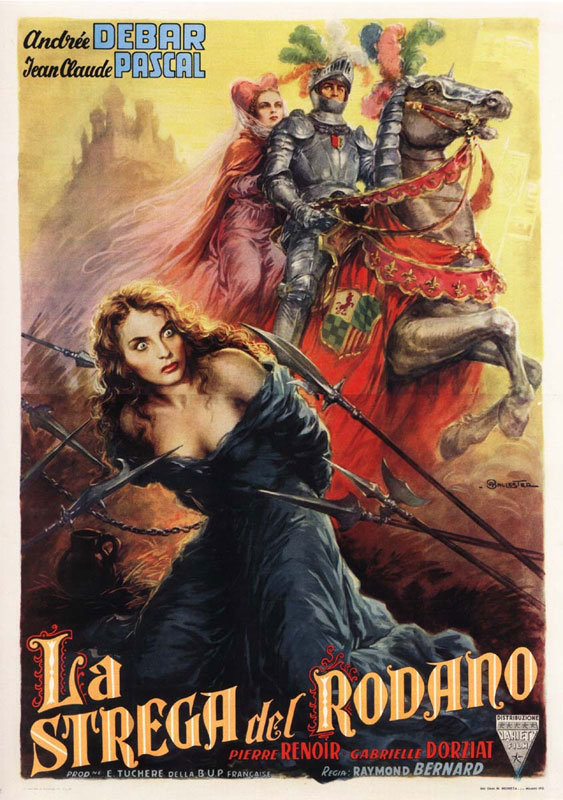 But whose came first is less important than what these posters reveal about different stylistic approaches to the same material: Grinsson’s flat planes of color against Ballester’s painterly chiarascuro, Grinsson’s crisp outlines versus Ballester’s soft textures. Both are striking designs, but Ballester’s painting, centered on the sheer terror, or is it madness, in Agnes’s wild, staring eyes (a Ballester trademark), is the more arresting.

Ballester’s fine brush work can be seen even more clearly in the original painting for the poster (found on his grandson’s website), the colors of which are markedly different from the printed poster. 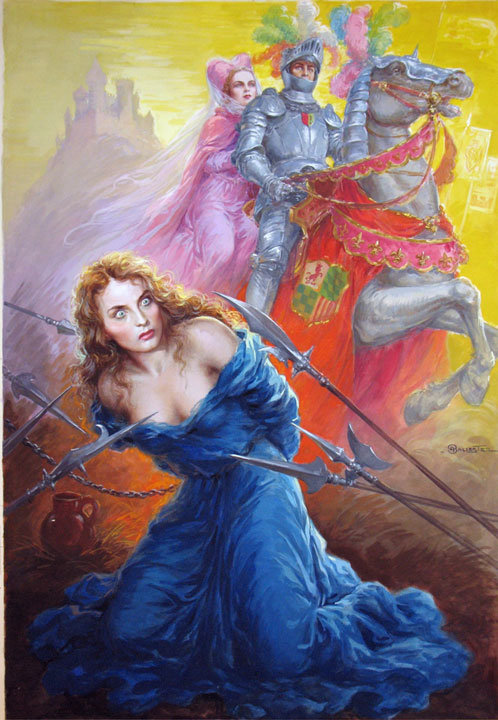 Born in 1897, Anselmo Ballester (whom I have featured here previously a couple of times) started designing movie posters in 1914 and worked for half a century as one of Italy’s major poster artists until he retired in the early 60s. Boris Grinsson was born 10 years after Ballester, in 1907, and in just over 40 years, between 1929 and 1972, made over 2,000 posters.

Ballester was the son of a Spanish painter and designer who settled in Rome, while Grinsson was born in Russia, fled the Bolsheviks as a child to Finland and Estonia, moved to Berlin to be an actor, and then escaped to Paris in 1933 after an anti-Hitler poster he had drawn was discovered by the Nazis.

The difference in their styles may be the result of the printing techniques that were prevalent at the time. Ballester was trained in lithography by his father, but the introduction of offset printing—which allowed for greater flexibility of color and texture—in Italy in the 1940s was a boon to the man Dave Kehr calls “the most painterly of movie poster designers.” Grinsson on the other hand started out working in offset in Germany but when he came to Paris, where lithography was the standard printing technique until the early 60s, he had to adapt himself to a more restricted palette. The effect of these techniques on the styles of midcentury French and Italian movie posters is palpable, with French designers working in bolder planes of color, while the Italians were more fluid and used richer palettes.

Both Grinsson and Ballester did most of their work for Hollywood imports (though Grinsson’s most famous posters are probably those for Truffaut’s 400 Blows and Resnais’s Hiroshima, mon amour). Perhaps by choice, perhaps by mere coincidence, both seemed to have made a specialty out of drawing or painting Rita Hayworth: I collected Ballester’s Hayworth posters in a previous post, and Russ Ryan of MeanSheets.com collected Grinsson’s lovely Ritas in response.

There is one other poster for Judgment of God that I must show, and that is Walterian Borowczyk’s marvelous 1956 Polish design which couldn’t be less like the posters above. 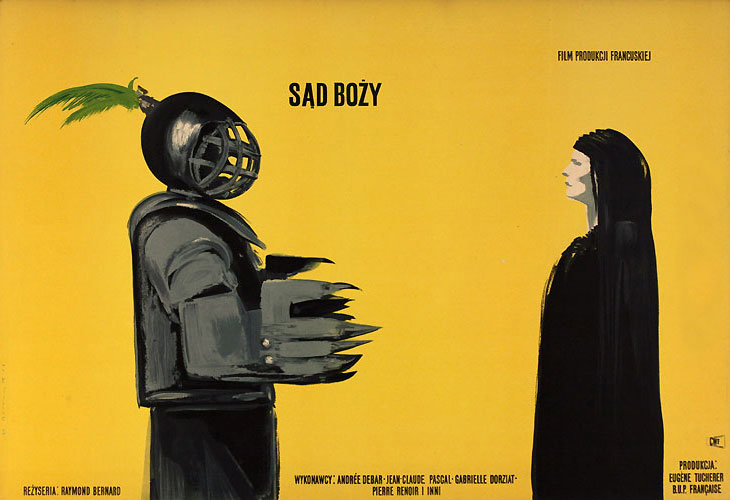 One more comparison of Grinsson and Ballester which may be instructive are their posters for On the Waterfront. Again they couldn’t be more different in style though both feature that giant stevedore’s hook in the foreground. Ballester’s Waterfront poster, which looks at first glance like a Geroge A. Romero film, may be the best known of all his designs (it routinely sells for $2,000-$3,000 when it pops up on Heritage Auctions). As for Grinsson’s superb widescreen design, there is a great photo in Jean Segura’s invaluable book on Grinsson, reproduced here, that shows the 91-year-old artist (a year before he passed away in 1999) sitting in front of his masterpiece with fellow poster design giants Jean Mascii and Constantin Belinsky. 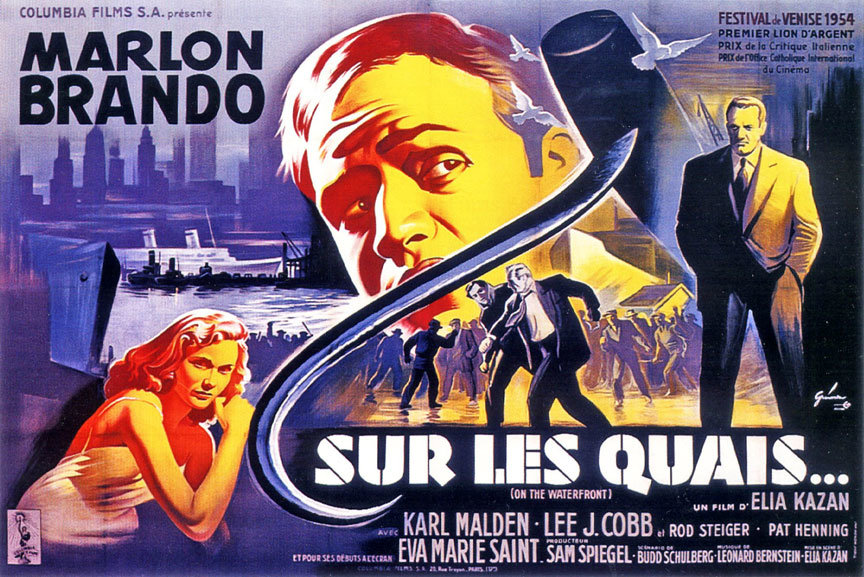 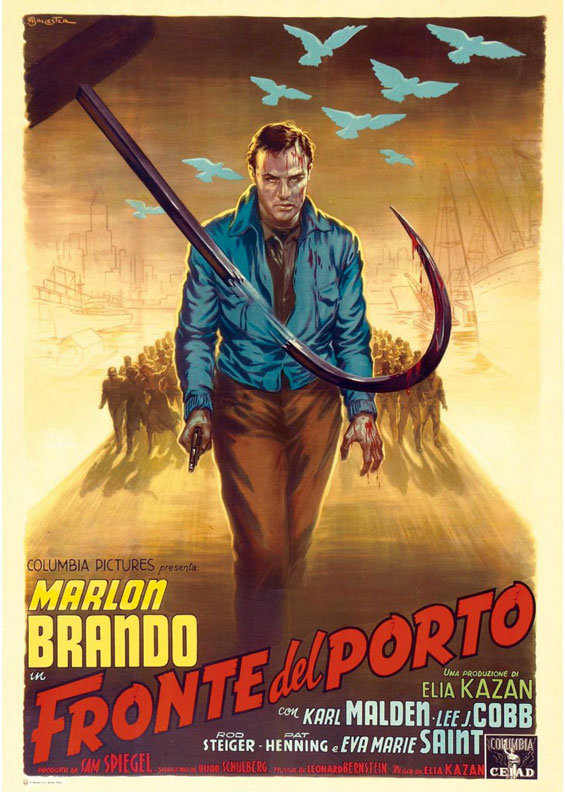