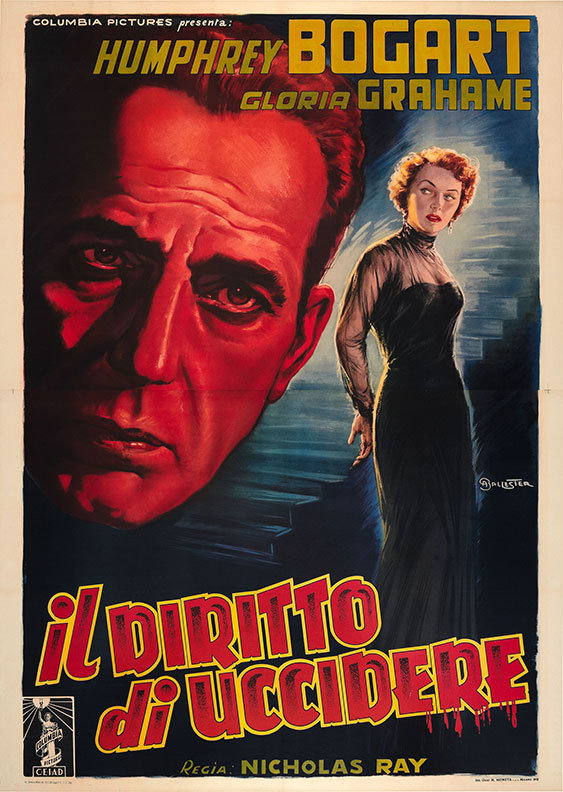 A couple of weeks ago, on what would have been Gloria Grahame’s 89th birthday (the actress died in 1981, her last years poignantly documented in the memoir Film Stars Don’t Die in Liverpool), I searched for a poster that would best represent her. The best that I could find was the Belgian poster for Fritz Lang’s Human Desire, but it became clear to me that poster artists had rarely captured one of the most distinctive and glorious faces in Hollywood. Most of the images of Grahame in posters just don’t look like her.

All of which leads me to In a Lonely Place, perhaps Grahame’s best film and one of my all-time favorites, the posters for which I’ve been looking for an excuse to feature. Nicholas Ray’s 1950 doomed romance about a cynical screenwriter with a hot temper who falls in love with the actress next door is one of the bleakest of Hollywood movies, with the added poignancy of knowing that Ray’s marriage to Grahame—whom he insisted on casting over the producers’ first choice of Ginger Rogers—came to an end during filming.

The original American one sheet for the film, below, is nothing special, though it is interesting in that it uses a photograph of Bogart, unusual for 1950, and that it adopts the type-over-face style that is popular today. 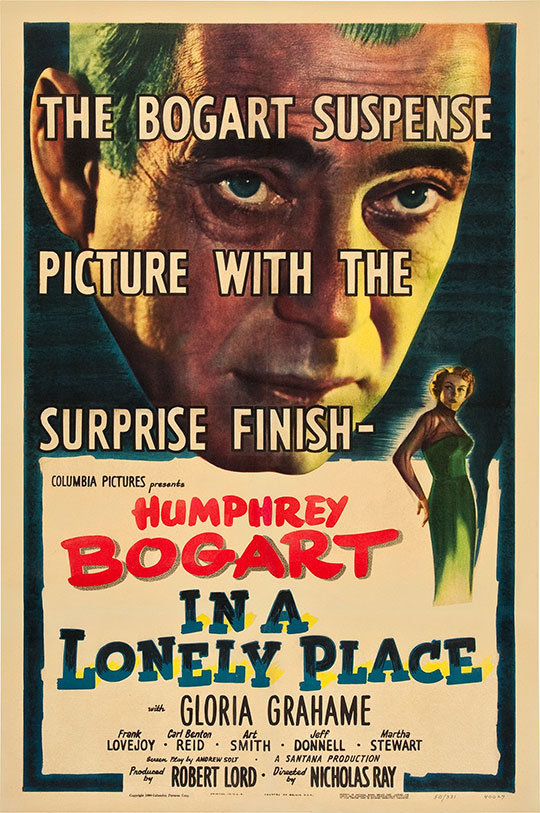 The foreign posters for the film, on the other hand, are much more interesting, starting with Anselmo Ballester’s fabulously dramatic Italian 4-foglio at the top of the page. Ballester perhaps comes closer than most artists to capturing Grahame’s looks (that chiselled nose and upper lip and always quizzical eyebrow) but she still doesn’t seem quite right. ﻿ 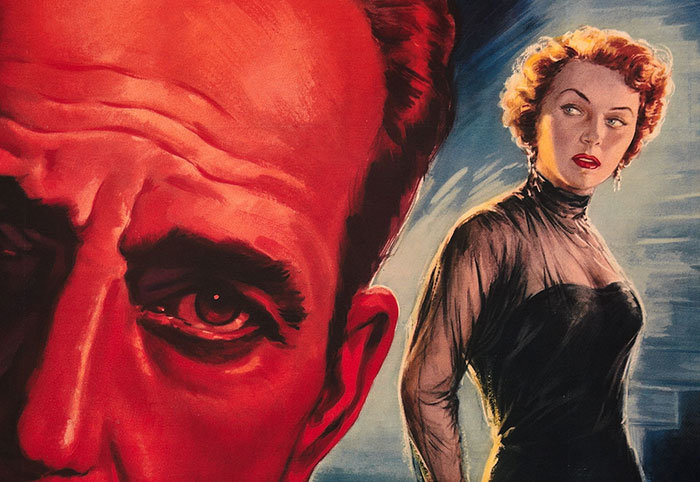 Ballester also painted a completely different design for the 2-foglio, below. 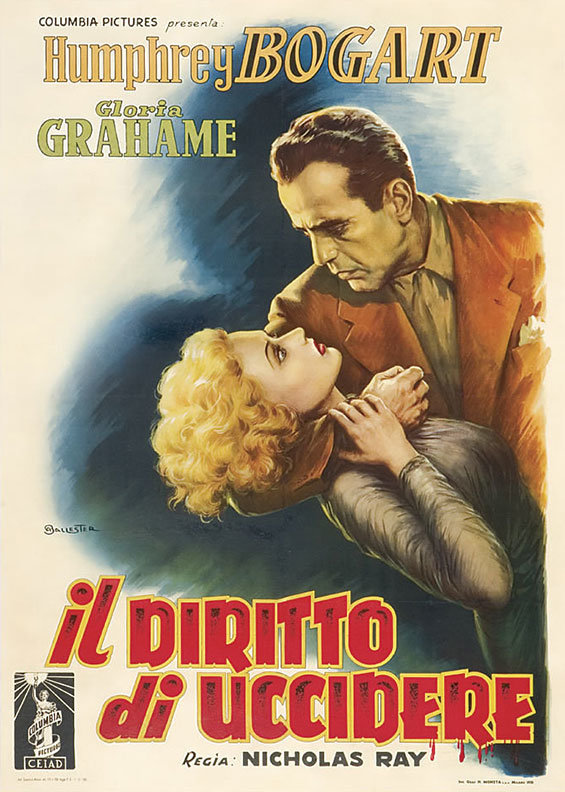 The Italian title on Ballester’s posters translates as “The Right to Kill,” but there are two more Italian posters, with artwork by an artist called Bat (I don’t know his or her first name but try googling “Bat poster artist” and see where that gets you), in which the title translates as “Fear Not Because” (with “The Right to Kill” as a subtitle). Since only the Ballester 4-foglio is dated (1951) I assume his designs came first and that the title change may have been an attempt to soften the impression of the film after a poor opening? 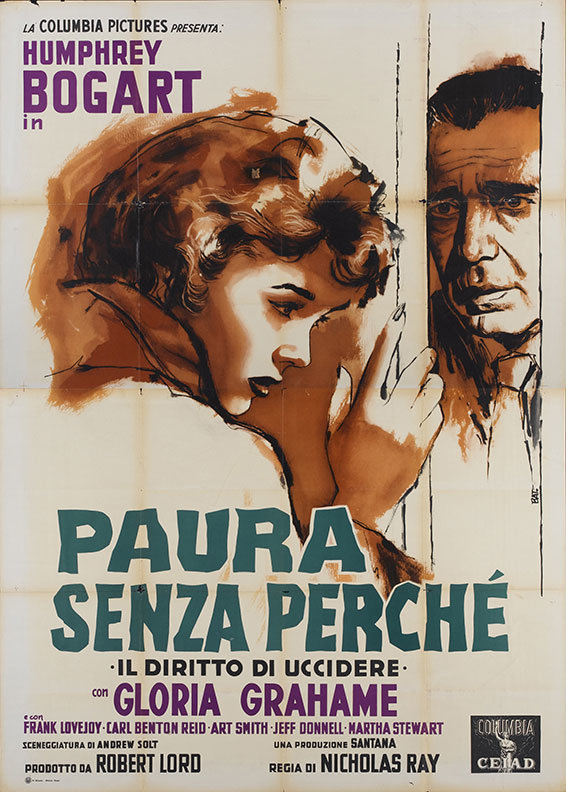 Bat’s 4-foglio is above, and the 2-foglio below. 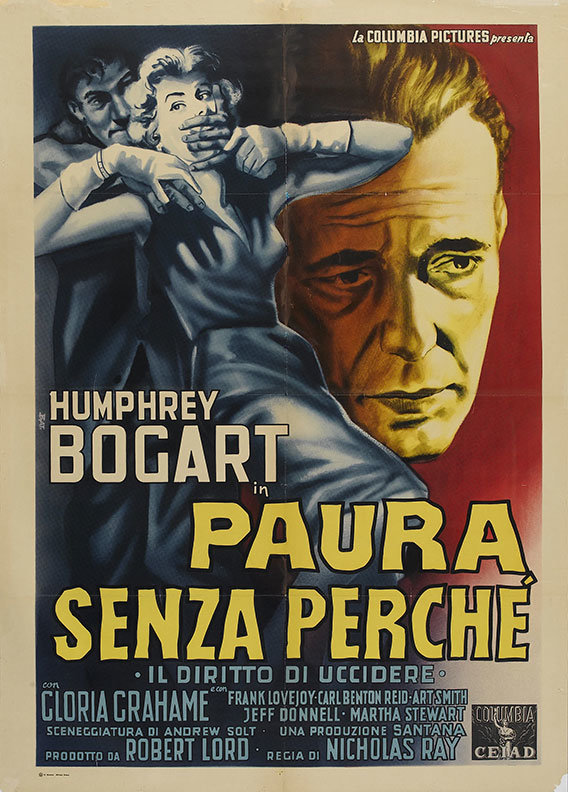 There is one American poster for the film that I love, below, but I’m suspicious of its provenance. To me it looks much too much like a contemporary fan poster for the film and not a design from 1950, despite, or perhaps because of its too-perfect retro artwork and lettering. Heritage Auctions, which sold this poster for $1,400 back in 2007, says it’s “the first 30 x 40 we’ve seen on this film.” If anyone knows anything more, please tell. [Postscript: I just realized that it is clearly by the same artist as this 1949 30 x 40 limited edition poster for Adam’s Rib.] 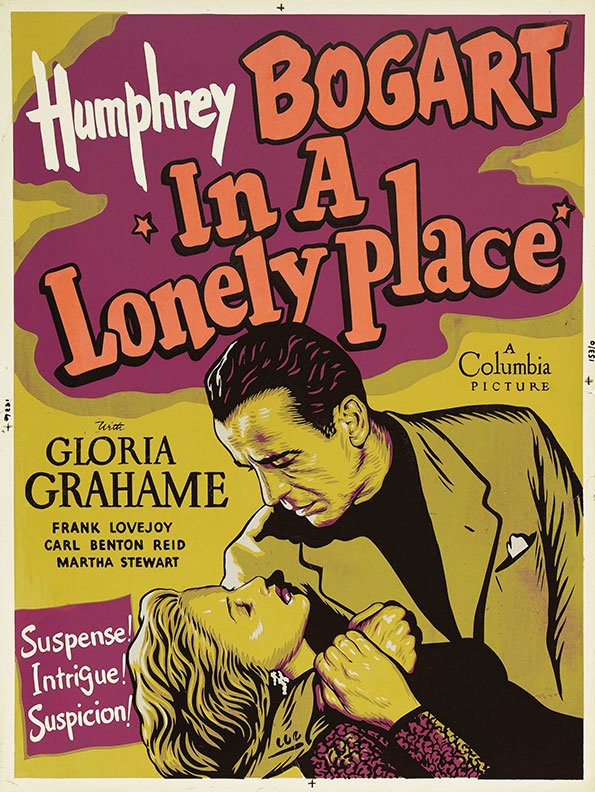 One of my favorite things about In a Lonely Place is its unusually poetic title (it was based on a 1947 novel of the same name) but the Italians weren’t the only ones to change it. The French called it Le violent or “The Violent One”, as seen in this stunning grande poster by René Péron... 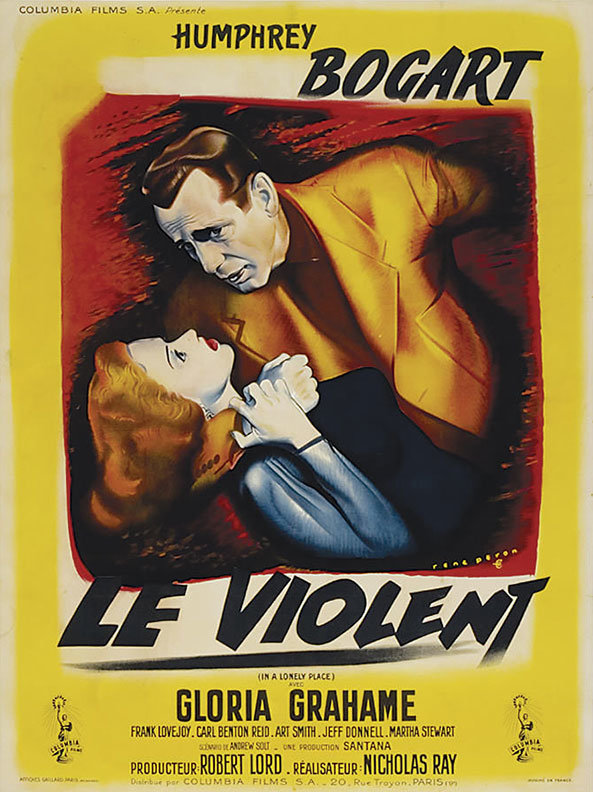 ...as did the Belgians (note how this poster is the mirror image of Ballester’s, minus the stair railing): 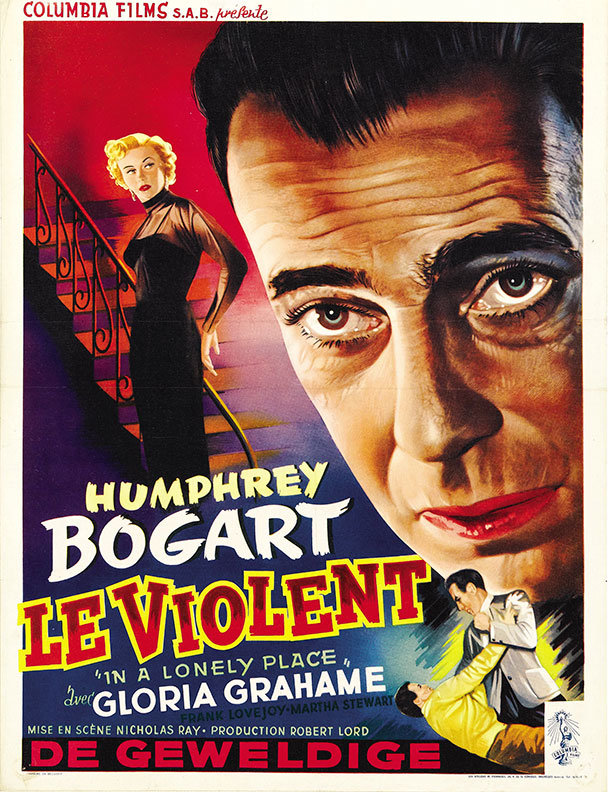 The Argentinians called it “Death in a Kiss”... 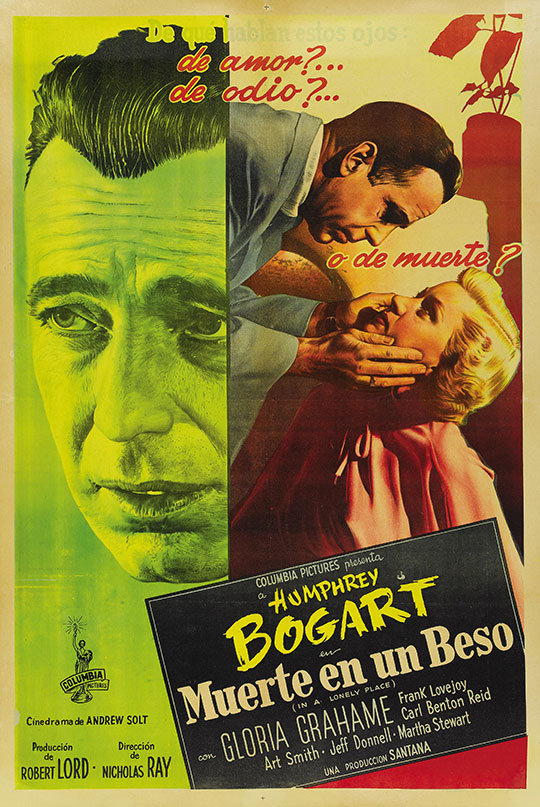 And the Danes, in this striking line-drawing poster by Bering, called it “The Man without Inhibition” with the tagline “He goes through life like a loaded gun﻿﻿.” 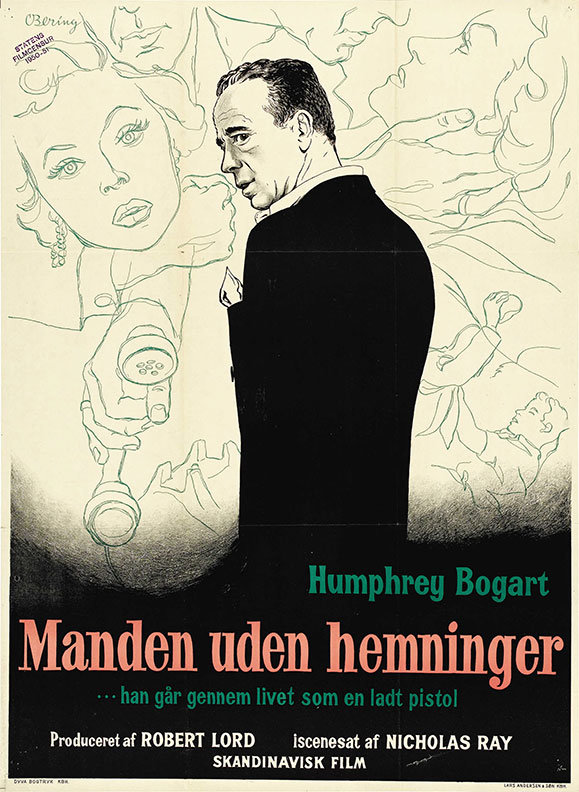 And finally, one of my favorites of all the posters for the film is the Swedish design by V. Lipniunas﻿, a superb montage of photographs, typography and abstraction (never mind the fact that it makes it look as if this most urban of films takes place on a prairie), where the title Nakna Nerva translates as “Naked Nerves.” 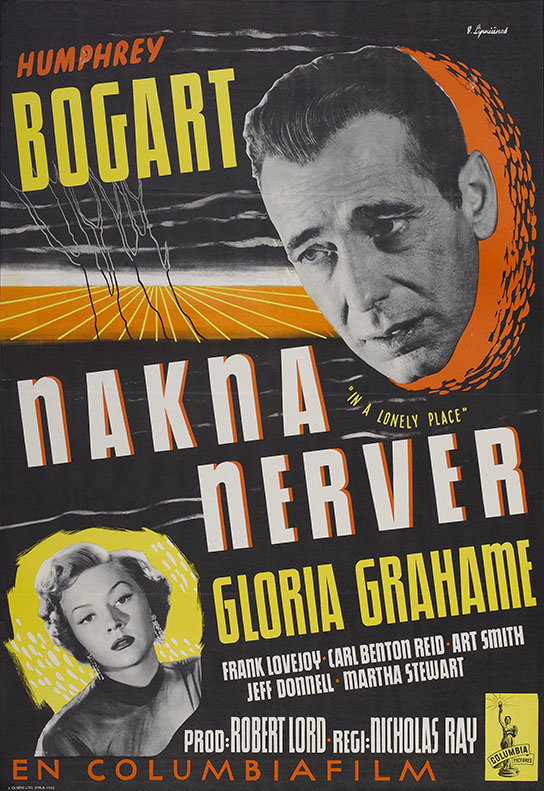 All posters courtesy of Heritage Auctions.