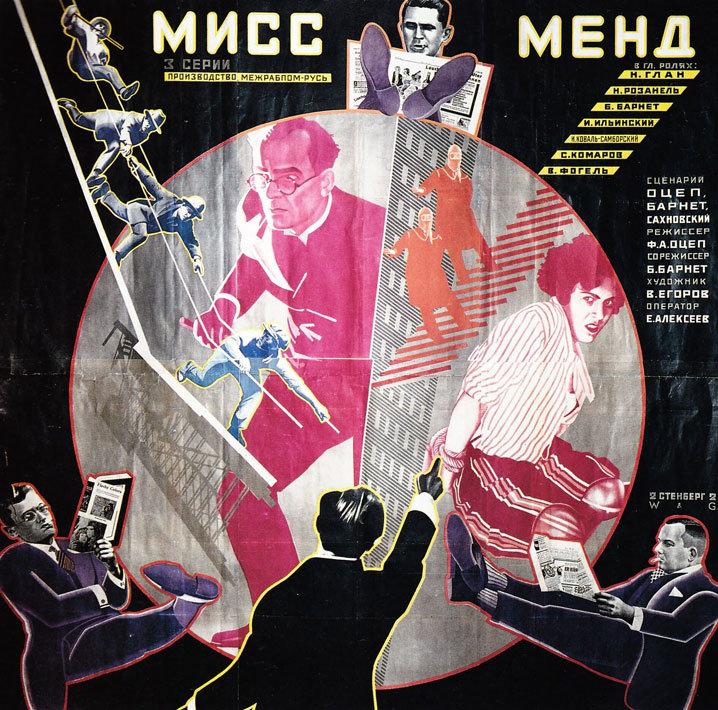 As promised, here are some more of my favorite posters by the amazing Stenberg brothers.

The enormous 81 inch square poster for Miss Mend (Boris Barnet & Fyodor Otsep﻿, USSR, 1926) promises the thrills and spills (as well as a fair share of capitalist indifference) of this epic, four hour long adventure serial, which is one of the few films promoted by the Stenbergs that has actually survived. Set partially in an imagined America, the film was based on a serialized detective novel written by Marietta Shaginian under the yankee nom-de-plume "Jim Dollar." The film, which follows three reporters and an American office girl attempting to stop a biological attack by a cabal of western business leaders determined to wipe the Soviet Union off the face of the earth, was one of the most popular Soviet films of the 1920s although it was condemned by the Soviet press of the time as lightweight "Western-style" entertainment.

In his superb introductory essay to Stenberg Brothers: Constructing a Revolution in Soviet Design, Christopher Mount writes about the projector that the Stenbergs developed to reproduce illustrated versions of film stills:

"With it, the Stenbergs constructed a new, entirely modern perspective, in which each image remains true to its own perpectival rules yet has little realistic connection to other images in the picture as a whole. The variety and juxtaposition of scales, and the frequent subversion of spatial relationships, are extraordinary. For example, in their poster for the film adaptation of the Miss Mend detective stories, one of their finest works, there is no discernible connection between the size of the figures and their relation to the picture plane. Only because the images are drawn, and not made from photographs of dissimilar quality and tone, does the work hold together as a unified conceit."

Mount also notes that the poster owes a great deal to Alexander Rodchenko's covers for the Miss Mend novels.

Below are ten more of my favorite Stenbergs. 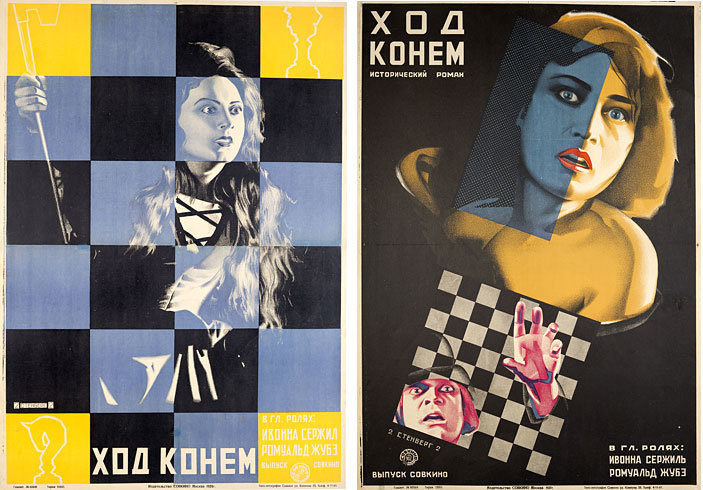 Two posters from 1926 and 1927 for The Knight's Move a.k.a. Le miracle des loups (Raymond Bernard, France, 1924) a film set in the 15th century in which Louis XI’s granddaughter defends a town against invading troops and marauding wolves. Despite the Stenberg's symbolic use of the chess board motif it's not clear whether the film actually had anything to do with chess. 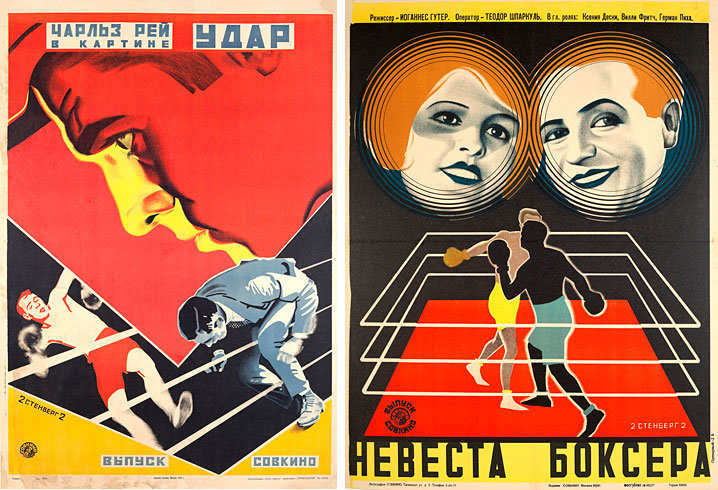 The Stenbergs designed a number of posters for boxing films and seemed to enjoy both the geometry of the boxing ring and attempting to capture the dynamism of the sport. Hence the blurred gloves in the 1926 poster for The Punch/Scrap Iron (Charles Ray, USA, 1921) and the reverberating circles in their 1929 poster for The Boxer's Bride (Johannes Guter, Germany, 1926). 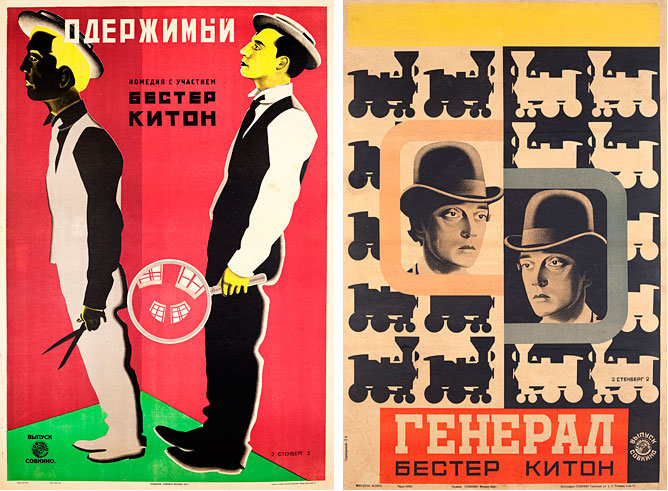 A 1927 poster for Sherlock Jr. (Buster Keaton, USA, 1924) which plays on the fantasy double life of Buster's sad sack projectionist and the Stenbergs' second 1929 poster for Keaton's The General (Buster Keaton and Clyde Bruckman, USA, 1926). Interesting how both posters work with positive and negative images. 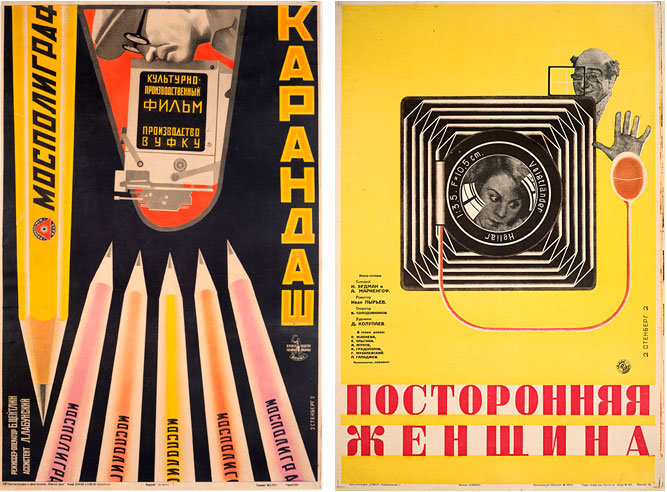 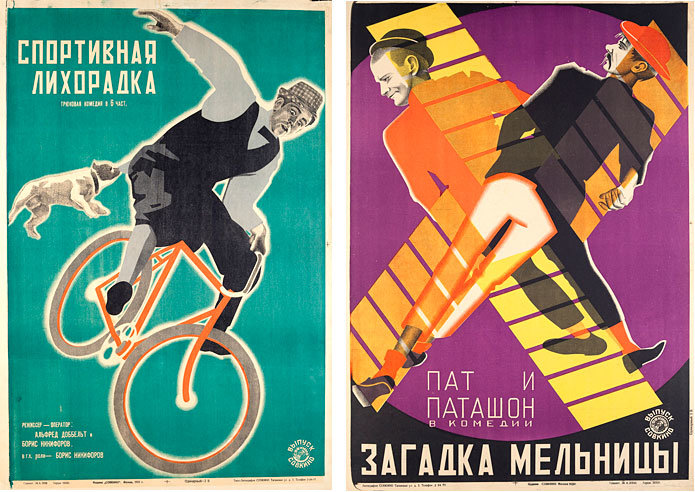 Two of the Stenbergs more comic creations: a 1928 poster for Sporting Fever (Alfred Dobbelt and Boris Nikoforov, USSR, 1928) which is attributed to the brothers even though it is unsigned, and an equally off-kilter 1928 poster for The Mystery of the Windmill or The Sacrifice of Ole the Inventor (Lau Lauritzen, Denmark, 1924) starring the Danish comedy duo Fy and Bi.

Poster scans are courtesy of Giovanni Tiso’s "Daily Stenberg" blog and Tony Shafrazi Gallery. Please note that with the wonderful Notebook redesign you can now click on any of the images and see them in all their glory, as well as find the last few years of Movie Poster of the Week all in one place.