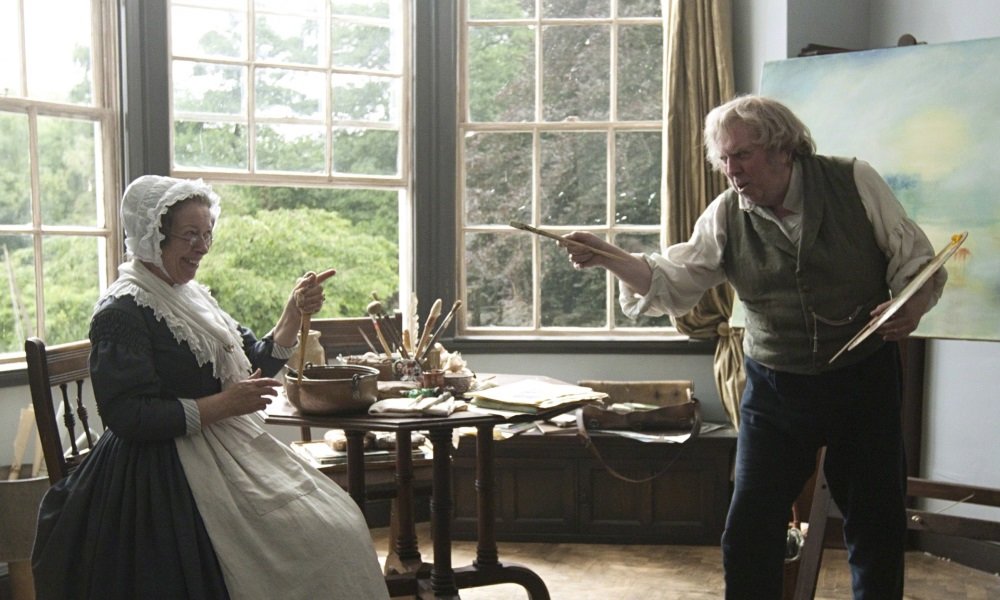 Let us begin with difficulties. Mike Leigh's Mr. Turner, a film as rich as an afternoon in the Louvre, presents an austere and bilious portrait of the Englishman and a ridiculous one of a young John Ruskin, a critic who explicated Turner in many words over the course of different works—a critic who drew and painted, lecturing on both with a great avidity. In Leigh, the drama is the classic case of critic as obnoxious foil to the artist's majesty and magic, with Ruskin's exaggerated lisping accent and pushing every “r” out as a “w” being the cherry on top. Leigh has said, “...he was a kind of prick...” Well, maybe.

But I must bring in one of Leigh's most passionate fans—the poet-critic Guy Davenport, whose essays are jewels, and who averred he was “not writing for scholars or critics, but for people who like to read, to look at pictures, and to know things.” He said of the English filmmaker, “When Mike Leigh gets to heaven, Chekhov will want to shake his hand.” Dead these ten years, wouldn't it have tickled Davenport, a draughtsman himself who wrote frequently on painting, to see a Leigh film on a legendary artist? But what would Davenport have made of the Ruskin interlude showing the critic in a convex mirror? In an essay on the critic, Davenport says of Ruskin's voice, “It is, even at its most querulous and preacherly, not writing but speaking. It is, in a beautiful sense, thinking aloud, at its most congenial, conversational, richly anecdotal, and always observant... He could make a passage from the Bible sound like words you have never heard before.” And to the matter of the two Victorians meeting, Davenport adds, “Ruskin and Turner never dined together, though an invitation was once sent. Turner knew that his manners weren't up to those of the refined Ruskins, and said so, explaining graphically that, being toothless, he sucked his meat.” Leigh's film takes these truths and plays with them—Ruskin does speak gloriously and pompously, the two only have drinks, and Timothy Spall's Turner is not toothless, but does make many a bovine sound in his peregrinations and artistic struggles. Davenport, grousingly hermetic, might have laughed off the lisp and reiterated that in 2015, nearly no one reads Ruskin.

Because I love art, particularly books, films, plays, and paintings, and have sometimes fit a critic's assignment into my calendar, I'll try to place Leigh's film, that is not only about an artist, but about his time, his loving and troubling relationship with his father, and how success and failure as an artist weighs on others, into the space criticism holds in this new year.

Critics have a job incompatible with their raw materials. They are to respond promptly and pithily to a work of art—the very life of which changes by different viewings, listenings, and readings, and at different times in one's life. It is like being a bull rider—one being is not made to situate itself onto the other. Yet, our culture still respects some views and honors the guidance offered. In conjunction, it is no exaggeration to say we live in an era that disposes of language, including the etiolation of the sentence, punctuation, spelling, and grammar by the rush to judgment, and by the ego not caring what it's form of thought is like, only that it's owner's name is lit up. Our species is changing—words, because they are not respected, boil more easily over into lies and exaggeration, disregarding the best humanistic advice possible, courtesy of Shakespeare: “Speak what we feel, not what we ought to say.” Where once words were imbricated and limned to grasp at wisdom, we now have the sweet satisfactions of irony, the insulting tweet, and the ham-handed “article” on why this or that does or doesn't meet one's satisfaction.

“What is criticism?” has been asked countless times throughout history, but there is still no adequate answer. In a series of essays treating the place of the artist, the critic, and the scholar in his book Every Force Evolves a Form, Davenport quotes this sentence from philosopher George Santayana twice: “To understand how the artist felt, however, is not criticism; criticism is an investigation of what the work is good for,” which may be the best equation for the critic's dilemma, though “good for” smacks of the paterfamilias making a pronouncement from 1905—the year it was published.

Within the crumbling worlds of literary arts and popular film studies, many reviews hover near a syncopated knee-jerk pitch of press release, as David Winters says that, “... triviality is among the allures of the form.” Yet, of course, the advantage of the internet is that there are a bevy of places and people not delivering half-baked thought—﻿many doing it for free. Still, our twenty-year-old “tool” has changed the ways and means of celebrating or decimating. Our culture and our politics flood the song of ourselves through the tool's giant spigot of information, bloating our bitchiness and bullshit. The zeitgeist again leans toward witch-hunts, often of the virtual variety. At every minute of every day, someone blames another, someone searches for a fault to brand on someone or something else—we (and I mean America) are becoming unable to accept fate, to accept that there are many forces beyond our control. In an age where everything is thought preventable, it doesn't shock that a lot of our art is cruel-hearted, pandering, and dispassionate about the joy of living, with attacks on The Tree of Life's joyful nakedness most telling.﻿

How else can critics respond to art? Those from the more august periodicals lead the way—though their entelechy is more subtly deployed and believable due to their employers. In an August issue of the﻿ New Yorker, James Woods says of the writer James Kelman, “Kelman is a narrow writer, and can indeed be monotonous (often usefully, sometimes merely).” In the same issue, Anthony Lane says this of a film: “'Love is Strange' however, is not about gay marriage. It is about a marriage that happens to be gay. If the film grows slightly boring, even that can be construed as an advance.” These hackneyed judgments are standard fair. The analysis is God-like, saying “this” is what “that” is, what it means. I wouldn't bother, or, I would. Statements in askew opposition to the spirt of Santayana's or Virginia Woolf, who said of critics, “...let us ask them to be generous of encouragement, but sparing of those wreaths and coronets which are so apt to get awry, and fade, and make the wearers, in six months time, look a little ridiculous.”

Into this atmosphere, I have pulled my own asinine punches, saying of﻿ Melancholia that, “...Von Trier com[es] off like a floundering, churlish auteur who needs to again make art that communicates, and pays homage to, his own psychosis.” But when fitting on the crown of a critic, it is difficult not to come across as a prig, unless like Kent Jones and Geoffrey O'Brien (the two film critics who move me most), one mostly reviews works they extol. The dilemma and incompatibility of criticism most hit me when trying to fit my adulation for Mr. Turner against my cool reception to Boyhood, which has turned out to be the work many critics and award givers back as the best, most ambitious, most revolutionary film of the year. Richard Linklater is one our most compassionate and aware artists, yet he hadn't made an absorbing film, to my taste. As the months since its release went on and the honors piled up, peers passed on some of the exclusionary tidings by the film's champions. Two friends traded barbs over it, with the lover of the film eventually saying: “If you didn't like Boyhood, I don't know if I can be your friend.” A cri de coeur not far from the gas behind last years' 12 Years as a Slave, when Chris Rock confided via tweet: “If you don't see 12 years a slave. Then you don't deserve eyes.” I'm not sure art should be utilized as a bargaining chip in relationships, like the men or women who won't step into one unless a child will be produced.

How could I or anyone contend with such bullying pig-headed vehemence? An us versus them mentality that the Left may sport more than the Right. If I said what I felt about﻿ Boyhood—that nearly every other film Linklater made was more affecting, less cloying, and not taking itself so seriously, from Slacker's come-what-may as ontological Americana, to the Before films' Rohmeresque precision masquerading as whimsy—what difference would it make? I must mind the words of Santayana and Davenport: What is Boyhood good for? I honestly think it's good for patting ourselves on the back, and saying “Yes, life can be hard, but you can get through it,” as some version of this advice is foisted onto the protagonist in scene after scene, especially in the last hour. When I see Linklater's not too distant Texas neighbor Terrence Malick examining many of the same issues in another coming of age story (Tree of Life) and arriving at quite a different end that parades as an end, but is really an opening for our doors of perception, similar to the work of Dreyer, Ozu, Bresson, Bergman, Kubrick, and Apichatpong Weerasethakul, I glory that he is communicating a very completed dichotomy through symbols, through the play of light and shadow, and performances that register as both mythical and naturalistic. Everyone knows life is unfair, but does everyone know life is unfair and beautiful, often at the same time? This art forces me to confront the specter of not only myself on the earth and then my leaving it, but that of the whole human race, as Malick's vision has me dreaming “eyes wide open,” as Italian director Franco Zeffirelli told Kubrick of his experience of 2001.

After Ruskin's interlude in Mr. Turner, the years pass quicker and Turner's maid, who he used to use for sexual fulfillment on occasion, stoops more and gains larger lesions on her skin. Turner soon dies a protracted death, leaving one woman, a comfortably retired widow who he spent many of his last years with, partnerless, but happy to have known Turner—she carries a picture of him painting a sunset in her mind's eye. Meanwhile, the maid returns to his studio crying and circling the Turner's work space, lost and feckless.﻿

This plot summary stands in for images one needs to see for oneself, only after taking in the many minutes before that makes it possible. Perhaps I should agree that the early hours of criticism are recall and description of the thing itself. I recount it because it has only been four days since I saw it—I can only recall and I'm not in a hurry to make sense of it beyond its straightforward depiction of two class types, two psychological types, two types of grief, two women. We all die, so live all you can—if art is good at anything, it's reminding us of this. And if criticism has more of a fancy about it, it will dredge the morass of depictions to cry Eureka at the most powerful ones.