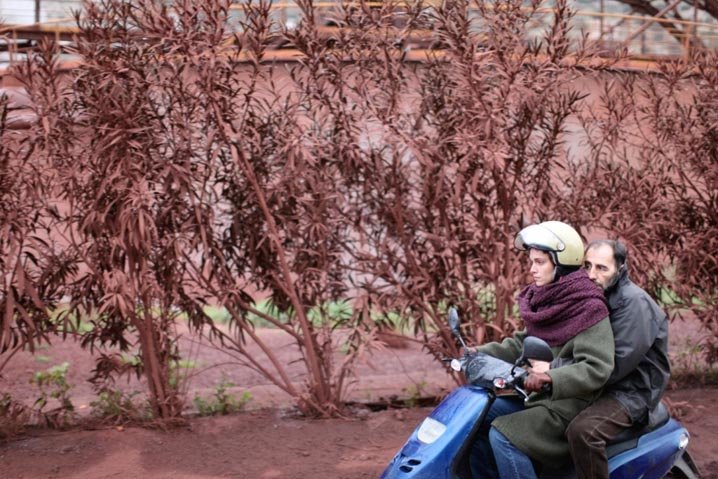 "Written and directed by Athina Rachel Tsangari, Attenberg pivots on a 23-year-old late bloomer and only child, Marina (Ariane Labed), who, as she prepares for her father's imminent death, enters her first (and hilariously awkward) sexual relationship with a man." Manohla Dargis in the New York Times: "Shifting between deadpan comedy and dry-eyed drama, the film unwinds episodically, starting with one of the most spectacularly terrible kisses in the history of movies between Marina and her close friend Bella (Evangelia Randou).... The title refers to a mispronunciation of the last name of David Attenborough, whose nature documentaries Marina raptly watches and which mirror Ms Tsangari's observational if sympathetic approach toward her characters."

"Attenberg costars Dogtooth writer-director Giorgos Lanthimos and is written and directed by his associate producer Athena Rachel Tsangari, making comparisons unavoidable," writes Vadim Rizov at GreenCine Daily. "Tsangari works in a different mode from Dogtooth, a highly-directed, slickly widescreen piece of tableaux cinema. Attenberg is 1.85, shot on grainy [35mm] and roams all over its small Greek town, rather than sticking to a family compound… Because Marina has to grow, Attenberg flirts with sentimentality, which isn't a huge sin. More problematic are its occasional lapses into the generic language of Euro art-house: certain shots (opening and closing, natch) seem to be held after no one's onscreen without particular reason, mostly as a catch-all signifier of rigorous filmmaking. Your mileage may vary on the many, many shots of Marina and Bella performing little choreographed silly walk/dance sequences, which are funny and unnerving until they begin to serve more as run-time padding… Despite those detractions, Attenberg is a portrait of a hard-fought coming-of-age in a carefully-shot town whose waterfront and gas stations get equal screen time."

"Tsangari, co-founder of Austin's Cinematexas International Short Film Festival, debuted the film at Venice; it also played Toronto and Thessaloniki, where I saw it in December." Ray Pride at Movie City News: "While Attenberg is more gestural than dialogue-driven, the father has a speech about the failure of modern Greece that is as piercing and pungent as anything you hear on the streets of that country in its current economic straits. The father speaks of the now-barren factory town, the film's setting, that he had helped design, of 'the piston' and the sea, of industry and alienation. He describes Greece as a country that missed the industrial revolution, a populace that went from being shepherds to being petit-bourgeois strivers. It's the rare scene that punches for the nose rather than lovingly constructed uncertainty. But the punch lands, forcefully."

"But unlike the perverse authoritarian patriarchy in Greece's recent Oscar nominee Dogtooth," writes Anthony Kaufman, who's spoken with Tsangari for the Voice, "her views about her native country aren't quite so grim. While elaborating on her complicated connection to her homeland, she aptly describes her film as well: 'It's this sense of loving, but not being sure how to do something good with it — like this self-imploding, self-destructive pathos.'"

"It would be too reductive to insist on attributing Marina's self-willed seclusion to a matter of alienated living in a not-quite-post-industrial environment," writes Andrew Schenker in Slant. "Though unlike the film's obvious point of comparison, Dogtooth, which depicted, by contrast, an enforced seclusion, social context is an important matter here. Finally, as Marina begins to bridge the gap of her isolation and prepares for her father's death, her standing on the threshold of a new century (if, per the father's words, the film takes place around 2000), as cinema then stood on the verge of its own now largely completed digital shift (Attenberg was defiantly shot on 35mm), is hugely significant. Tsangari's is ultimately a film that asks how one can be expected to cope with life in what might be termed post-post-modernity. The film's varied segments serve as the answers: an anarchic sense of play; the movies, including this one, that provide us with this manic brand of release; music; sex, of course; and, possibly even, if we're lucky, love."

Earlier: Reviews from Venice and Toronto, Daniel Kasman on "one of the finest" films he caught at TIFF, and Adam Nayman's interview with Tsangari for Cinema Scope. Attenberg screens tomorrow at MoMA and again on Saturday at the Film Society of Lincoln Center. 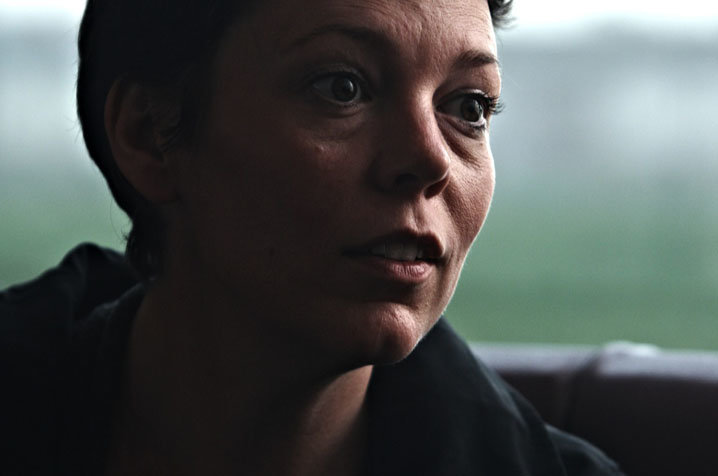 "In Tyrannosaur, Peter Mullan plays Joseph, an unemployed man whose brutal streak eventually yields to sympathy after meeting Hannah (Olivia Colman), the battered wife of a drunk (Eddie Marsan)," explains Nicolas Rapold in the middle of his conversation with Paddy Considine about his debut feature for the Voice. "In Joseph and Hannah's connection, Considine sees 'a love story' exploring 'what bonds they'll allow to be put on them.' The result, an elaboration of his prizewinning 2007 short, Dog Altogether, consists of modulated quiet, tentative communion, ramshackle absurdity, and selective flashes of sadism. Tyrannosaur is what you might expect from someone known for his collaborations with Shane Meadows in violent tragedies (A Room for Romeo Brass, Dead Man's Shoes) and, more recently, as the tormented investigator in the Red Riding trilogy's second chapter. As for Considine's actors, Mullan (best known for My Name Is Joe and a director himself with Neds and The Magdalene Sisters) may be an old hand at stories delving into the dark places of anger and personal torment, but Colman's performance comes as a revelation."

"Like another actor's maiden effort behind the camera, Gary Oldman's 1997 Nil By Mouth, Tyrannosaur offers up a kitchen-sink vision of suburban England in which women and children cower at the feet of masculine fury," writes Nick Schager at the House Next Door. "Considine's script leaves no male untainted by violence, including Joseph's dying friend, who on his death bed laments having done very 'bad things'; his pub mate Tommy (Ned Dennehy), who espouses a desire to go all 'Ku Klux Klan' on local Pakistani shop keepers; and the boyfriend of his across-the-street neighbor, who bullies his girlfriend's young son Samuel (Samuel Bottomley) with his pit bull. A brutal, godless bunch these men are, and their nastiness is juxtaposed with Hannah's quiet faith in God, a dynamic that's integral to Tyrannosaur's creaky uplift-after-horror designs."

"Considine goes to such great lengths to sensationalize his unlovable protagonist's myriad acts of violence that it's almost impossible to take him seriously," writes Simon Abrams in Slant. "But only almost… The most troubling aspect of Considine's proudly vicious representations of violence in Tyrannosaur is that they're oddly effective in bits and spurts." Ultimately, though, "Considine's impatience prevents his characters from achieving the kind of emotional complexity that he'd like us to think his film has in spades." 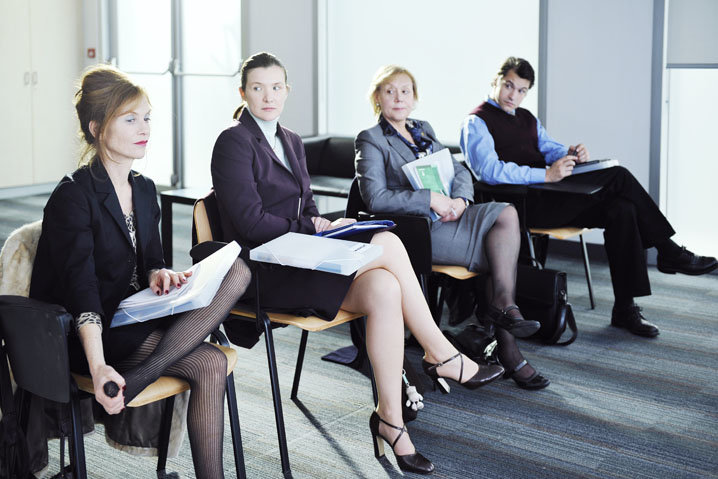 "Copacabana proves that Isabelle Huppert can do anything," writes Nick Schager in Slant, "including starring in a trivial mother-daughter dramedy that's beneath her considerable talents. Marc Fitoussi's film revolves around Huppert's Babou, a single mom whose frivolous globetrotting life has now fully alienated her from 23-year-old child, Esméralda (Huppert's actual offspring Lolita Chammah), who resents her parent for not providing a stable upbringing and household, and is embarrassed by her wild, carefree, juvenile behavior. When Esméralda callously disinvites Babou to her forthcoming nuptials out of fear that her mother will mortify her new in-laws (a blatantly and implausibly extreme decision, given that Babou remains loving and devoted to Esméralda), Babou endeavors to become responsible, which takes the form of accepting a job selling timeshare apartments in a gray, rainy seaside Belgian town."

"Director Marc Fitoussi captures the paranoia and discomfort inherent to starting a new job in a business organization, but doesn't have much sense of pacing or narrative development, failing to imbue the relationship between mother and daughter with emotional resonance." Anna Bak-Kvapil for Not Coming to a Theater Near You: "The title of the film, meant to recall Babou's dream of visiting Brazil, is only referenced by some Latin music on the soundtrack, and a group of Brazilian dancers who pop up when a snazzy resolution is needed. Fitoussi is lucky to have enlisted Huppert, who even without her sting makes dull material absorbing, and he wisely allows her to explore a lighter persona without getting in her way. If only he hadn't subjected her, in the tone deaf final scene, to the indignity of having to shimmy around in a spangled Carmen Miranda headdress."

For Howard Feinstein, writing for Filmmaker, "this is one of the most misconceived — and boringly constructed — films I've ever seen." Be that as it may, it screens tonight at the FSLC and tomorrow at MoMA.

Update: "Huppert is in almost every frame of the film, and she's mesmerizing as always, creating a magnetic character out of what could have felt like a random collection of often irritating and thoughtless acts." Elise Nakhnikian at the House Next Door: "She and her daughter, who looks like Kate Winslet from certain angles and radiates a similar vibe of earth-mother warmth and intelligence, have good chemistry together, and Aure Atika is wonderfully astringent as Babou's hardbitten boss. But even they can't make up for an unfocused and often unbelievable script."