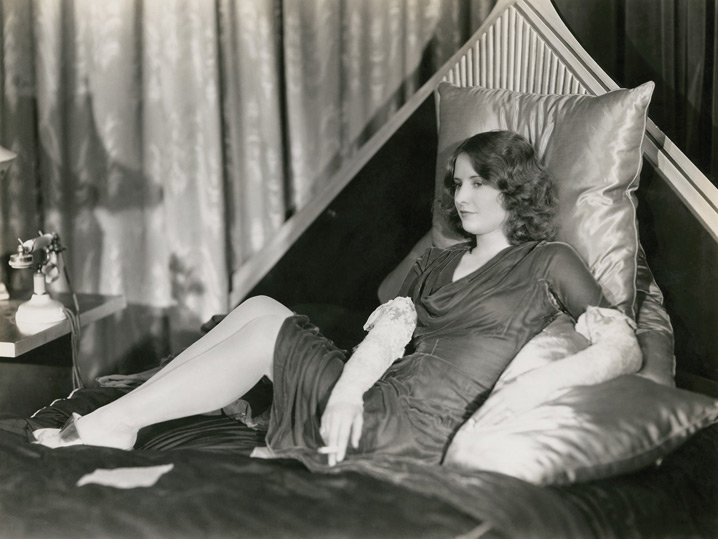 Each year New York residents can look forward to two essential series programmed at the Film Forum, noirs and pre-Coders (that is, films made before the strict enforcing of the Motion Picture Production Code).  These near-annual retrospective traditions are refreshed and re-varied and repeated for neophytes and cinephiles alike, giving all the chance to see and see again great film on film.  Many titles in this year's Essential Pre-Code series, running an epic July 15 - August 11, are old favorites and some ache to be new discoveries; all in all there are far too many racy, slipshod, patter-filled celluloid splendors to be covered by one critic alone.  Faced with such a bounty, I've enlisted the kind help of some friends and colleagues,  asking them to sent in short pieces on their favorites in an incomplete but also in-progress survey and guide to one of the summer's most sought-after series.  In this entry: what's playing Friday, July 15 - Thursday, July 21. (Image: Barbara Stanwyck in a publicity photo for Ladies They Talk About.)

Two Seconds (Mervyn LeRoy, 1932): Where Edward G. Robinson’s saps end, his brutes begin; their differences are of slumped or pointed hand-motions, bow ties or neckties, whether the hair is slicked-back or balding, but they converge in an outcast estranged from social wiles. Where Cagney’s violence seems self-perpetuating, a game played with himself for the stakes, Robinson’s is of an abused personality who will take or be taken, of a naked violence that exposes all ruses. And yet he’s a Kabuki-like frog-mask. Two Seconds’ four-minute shot of Robinson soliloquizing, as madness propels him toward the camera, is a feat of LeRoy’s always-declamatory direction: the characters are all masks, and the closer Robinson gets to inner truth, the further from external logic (“If you had killed me when I was a rat, I would have thanked you for it!”). He becomes both roles, both pleading for another character than whomever they’re playing; all that finally matters is the expression on his face beyond much coherent meaning at all. Over an hour, it is set-up by some ingredients from Vertigo: femme fatale, deadly heights, a paralyzing fall, slow circular pans to the hero. But LeRoy’s deployment, in WB house mode, is to show characters’ entire personalities as responses to their spaces and costuming; when Robinson nearly gets married through a close-up of his hand, a cup of booze dangling from his pinky and a cigarette stuffed between fingers, he’s an icon of quotidian detail.  —David Phelps

Night Nurse (William Wellman, 1931): A Takashi Miike film avant la lettre, William Wellman’s 1931 feature covers so many different genres as to seem like three or four movies collided into one. But Wellman holds it all together with great confidence: it’s the work of a man who can think of no finer challenge than impressing an audience. The film’s movements are also bound by a vivid sense of urban working life, as seen in the city-girl camaraderie of Barbara Stanwyck and her fellow nursing interns in the opening passages; the casual brutishness of Clark Gable’s chauffeur; and the constant bustle of the dialogue, which suggests lines overheard at a mobbed intersection. Indeed, this sense of euphoric activity is what shapes much of the film’s invention. The development from light comedy to the lurid drama of the final act suggests that the entire film has been carried away by the excitement of its own events. —Ben Sachs

Ladies They Talk About (Howard Bretherton & William Keighley, 1933): Barbara Stanwyck in a women's prison sounds like pre-code heaven, and if there's a little too much moralizing for some tastes, there's still a classic eye-popping, jaw-dropping moment, as Babs stares in wonder at the burly, cigar-smoking diesel dykes. We hurriedly fade out to a montage of prison letters, but the soundtrack teases us with a rendition of "I Wonder Who's Kissing Her Now?", a fascinating bit of underhand impudence tweaking the censor's nose and possibly winking at Stanwyck's own preferences... —David Cairns

Lawyer Man (William Dieterle, 1932): Many of these pre-Code confections are defined by their images of titillation and sounds of wisecracking: in Dieterle's Lawyer Man, our protagonist is nearly done in by titillation, and the wisecracks are complemented by whaps, smacks, slams, and other percussive notes in a running battle of noises between shiksa-coveting, Bowery lawyer William Powell and his rawhide strap of a secretary (Joan Blondell). She’s always at least two weeks wise to the messes he’s about to step in, and she clues him in with fiery displeasure and semi-coherent threats. ("I didn’t hear you knock." "You will. Later.") No matter: Powell is on a collision course with the ceiling of gentile Manhattan’s patience with the uppity, Lower East Side schlemiel. Dieterle and his writers craft a satisfying escape/redemption plot that tips the hybrid comedy-melodrama into screwball-gangster surrealism. —Jaime N. Christley

Love Me Tonight (Rouben Mamoulian, 1932): A creative explosion of musical-cinematic invention, with Rogers and Hart numbers iterated through the tireless and wacky experiments of Rouben Mamoulian, who was ON FIRE in the early 'thirties. Every number seems like a reinvention of what cinema can do, with bold ideas harnessed to flawless technique. What's doubly amazing is the the whole effect is so souffle-light, airy and charming. Maurice Chevalier plays a Parisian tailor chasing a defaulting customer to a rural chateau and stumbling into a comic opera fairytale, with Jeanette McDonald and Myrna Loy along for the ride. "Don't you ever think of anything besides men?" la Loy is asked. "Yes," she replies, "Schoolboys."  —David Cairns

Employees' Entrance (Roy del Ruth, 1933): In the grand spectrum of Department Store Cinema, Employees' Entrance (1933) may be less visually fanciful than Julien Duvivier's nightmare of modernity Au bonheur des dames (1930), but it is undoubtedly the funnier and more charming of the two. That isn't to deny Employees' Entrance its serious side. Roy Del Ruth, the unsung hero of pre-Code Warner Brothers, was a master at slipping in socially apt observations in the midst of speedy narratives brimming with snappy dialogue and good-natured humor. Here, Warren William plays Kurt Anderson, a ruthless department store manager who refuses to entrench in the face of the Depression. But after ousting the old-timers and daring to sell men’s undergarments to women customers, Anderson has created a long list of enemies, including the wrath of his rivals, the board of directors, and his contemptuous assistant (Wallace Ford) and his wife (Loretta Young). Del Ruth’s uncompromising temperament balances Williams’ nastiness with Ford and Young’s rom-com rollercoaster. In between, careers are crushed, men throw themselves out of windows, and lovers are united. Del Ruth knew that his audiences came to theaters wanting entertainment, and he gave it to them—but he never forgot the real world pressures they faced in their own lives, and that sensitivity adds to the credibility of his characters and narratives. —Cullen Gallagher

The Mind Reader (Roy del Ruth, 1933): That scoundrel-among-scoundrels Warren William is at his scheming best in The Mind Reader. William plays Chandler, a sideshow swindler who thinks he’s found the perfect racket. Wrapping a towel around his head, he becomes "Chandra the Great." Along with cohort Frank Franklin (Allen Jenkins, one of pre-Codes most endearingly shady character actors), Chandra aims to leave the fairgrounds far behind and conquer high society…as long as an honest woman (Constance Cummings) doesn't un-corrupt him first. Co-writer Wilson Mizner's colorful past (at various times a Klondike prospector, fight manager, robber, gambler, and general con-about-town) spices up the script with the right blend of tall-tale exaggeration and first-hand believability. Director Roy Del Ruth delivers what is arguably his finest picture. Certainly it is his most stylish, with bold lighting designs and copious canted camera angles. But it is Del Ruth's characteristically humanist touch and understanding for the underdog (no matter how crooked) that ultimately distinguishes this picture. Warren William’s "Chandra" stands among the most sympathetic, lovable and fully realized of the pre-Code charlatans. —Cullen Gallagher