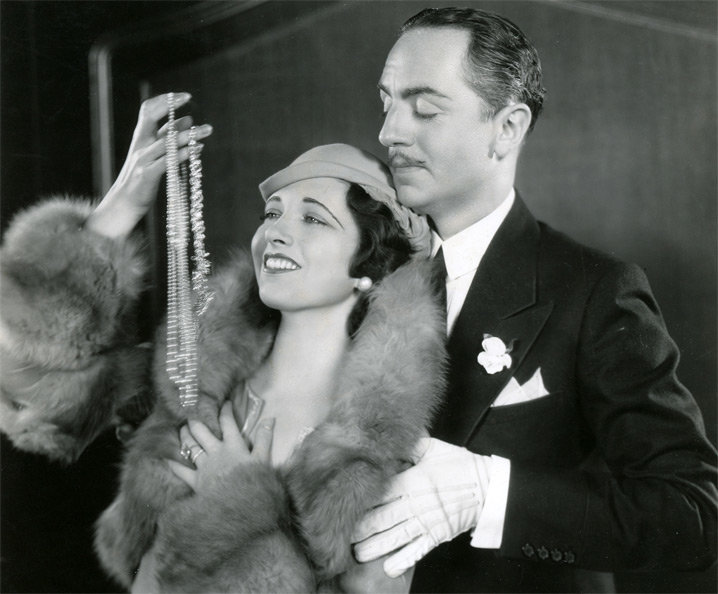 Each year New York residents can look forward to two essential series programmed at the Film Forum, noirs and pre-Coders (that is, films made before the strict enforcing of the Motion Picture Production Code).  These near-annual retrospective traditions are refreshed and re-varied and re-repeated for neophytes and cinephiles alike, giving all the chance to see and see again great film on film.  Many titles in this year's Essential Pre-Code series, running an epic July 15 - August 11, are old favorites and some ache to be new discoveries; all in all there are far too many racy, slipshod, patter-filled celluloid splendors to be covered by one critic alone.  Faced with such a bounty, I've enlisted the kind help of some friends and colleagues,  asking them to sent in short pieces on their favorites in an incomplete but also in-progress survey and guide to one of the summer's most sought-after series.  In this entry: what's playing Friday, August 5 - Thursday, August 11. (Image above: Kay Francis and William Powell in Jewel Robbery.)

Red Dust (Victor Fleming, 1932): Two scenes worth singling out: the early, highly charismatic dialogue between Clark Gable and Jean Harlow leading up to the first consummation of their romance; and a later scene (occurring after their characters have stopped sleeping together) in which he chases her from his room by defiantly throwing off all his clothes. Both moments exhibit a casualness about sexuality that feels utterly contemporary, namely in the way that sex arrives so fluidly out of friendship. The healthy eroticism is latent in the movie's setting, a rubber plantation in an unnamed South Seas country. Whenever the weather isn't hot and humid, it's often because a monsoon is coming: it is a passionate climate in which these characters thrive. Much of the film—the theme of brave men in an isolated setting; the heroes' brusque, workman-like attitude towards death—anticipates Howard Hawks' Only Angels Have Wings; according to some sources, Hawks worked on the screenplay for this. —Ben Sachs

Safe in Hell (William Wellman, 1931): Safe in Hell is built around a sense of the terseness of time, a doomed wait on a Caribbean island hosting flights from extradition. Plenty of Wellman's mannerisms are present: tracking shots following two people talking their way to somewhere, low pans and no-bullshit set-ups with a feel for industry and transit, eateries and hang-outs; here the serving of cheap brandy and weight of saloon stairs—the sources of what Manny Farber called Wellman's "minor achievements," sharp fictions where there'd be "no reason for any movie realist to handle the subject again." The plot bundles the remarkable Dorothy Mackaill (of whom, what happened?), an ex-prostitute fleeing conviction, in with a loose bunch of accidental criminals and lowlifes: an unlucky pickpocket, crooked lawyer, ridiculed ex-revolutionary, an oily prison guard. The men spit worms, slouch beyond their shoulders, obsess over a woman who can't be near them. The world of the film is a small, unstable one, made smaller by the sweat of loneliness, the memory of crime, the threat of violence and rape. So it's entirely devoid of sentiment, and, at its conclusion, stunningly downbeat—even Lang would bristle. Seems Wellman made a film about this sort of patriarchal hell because, faced with a choice that isn't, we'd be better off dead. —Matthew Flanagan

King Kong (Merian C. Cooper & Ernest B. Schoedsack, 1933): King Kong. What more can be said? But including this classic in a series on pre-Codes does allow a different light to be shone upon it. Of course, Kong partially denuding Fay Wray, out of seemingly innocent curiosity about what might lie beneath her strange cloth covering, is a timelessly perverse moment that was suppressed for decades when the Code came in. But there's also the generally abrasive tone, which elevated Kong to the status of hero by accident: the filmmakers' hadn't intended him to be so sympathetic (but animator Willis H. O'Brien obviously identified closely). The sailors and film crew are mostly selfish, brutal lugs, the natives are hostile (but still accorded more humanity than in Peter Jackson's remake), and New Yorkers, in the brief moments they are allowed before the Great Ape breaks loose, are the most unpleasant of all. Faced with this array of noisome humanity, is it any wonder audiences rooted for the gorilla and blonde romance? —David Cairns

Tarzan and His Mate (Cedric Gibbons, 1934): Genuine chemistry is rare in motion picture history, and it was never more organic than between Hungarian muscleman Johnny Weissmuller and Mia Farrow mama Maureen O'Sullivan (a.k.a. "Me Tarzan, You Jane.") The palpable body language between them—the kind that makes clothes look superfluously weird and in the way—was visible in all five films they made, but is most electric in this, the second Tarzan film they made together. In this sequel, a former beau of Jane's comes to woo her back to Civilization with all the things a woman wants: smart hats, silk thigh highs, and bias cut gowns. "If you have money, women aren't hard to get," his friend advises. But all that finery just briefly touches Jane's skin before Tarzan gets that look. What could be hotter than a refined lady perfect hostess who gets suddenly languid and savage with one touch from her dumb hunk? It's raw nature. —Miriam Bale

Trouble in Paradise (Ernst Lubitsch, 1932): "If there's something missing, that signifies trouble in paradise!" Is there any wonder that the radically-minded film critics of the 1960s gleefully seized on Ernst Lubitsch's 1932 Paramount film—for its high-style cynicism, its insistence on money as the basis of all interpersonal exchange (including the erotic), its effortless foregrounding of every manipulative trick and corny convention reigning in '30s Hollywood? Yet Lubitsch is never simply inside or outside the codes; while he up-ends every appearance (as much through sound counterpoint as through framing and editing games)—from that very first, startling spectacle of the garbage-man breaking into a Venetian aria—he also lets us enjoy the sly virtuosity, the infinite caginess, and finally even the mutual tenderness between his principal thieves, superbly incarnated by Miriam Hopkins and Herbert Marshall. For the form of its intricate, nested repetitions and for the content of its class-conscious satire, Trouble in Paradise endures.  —Adrian Martin

Jewel Robbery (William Dieterle, 1932): Society wife Kay Francis dreams of the desirable, dashing, derring-do of William Powell as a suave thief—err, "robber." It's Vienna and this is of course the romantic Hollywood-Europe of Trouble in Paradise or Love in the Afternoon. Swooning and wooing are favorite pastimes (just as they are common features of helmer Dieterle's filmography). Yet Jewel Robbery's opening moments are its most modestly impressive. (Shots of gleaming jewels, doors within doors to a safe.) A scientist installs a device which will shoot an electric ray across the juwelier's shop. The thief who would mean to steel any jewels will set off the alarm by passing through the invisible rays. But–surprise!–right before the ray is demonstrated, an employee informs the juwelier that they've already been robbed. Speedy efficiency married to a generosity toward tangents: a little taste of the best of 1930s Hollywood tendencies.  —Zach Campbell

Girls about Town (George Cukor, 1931): Girls About Town is an early George Cukor romantic comedy bubbling with sophistication, but not above good old-fashioned silliness. Gold-digger with a heart Kay Francis supplies most of the finer moments, with Joel McCrea showing early evidence of his light comedy skills, and heavyweight character blimp Eugene Pallette in charge of low farce. The screenplay takes us from Manhattan to a luxury yacht without any distressing reality intruding in between. It's co-authored by former silent clown Raymond Griffith (no stranger to the tuxedo and dry martini school of humor himself) and affords plenty of opportunities for Lilyan Tashman to steal scenes. The whole manages just enough effervescence to stay afloat. —David Cairns

Heat Lightning (Mervyn LeRoy, 1934): Steamy/sordid/sympathetic/unpredictable melodrama from director Mervyn LeRoy, who apparently doesn't know his left from right when attempting to match shots (a problem that plagued him throughout his long career) but can still serve up memorable compositions around the striking performances of pre-Code favorites Aline McMahon (given a particularly meaty role and allowed to switch from plain to glamorous for once), Ann Dvorak, Glenda Farrell, Frank McHugh (his trademark emphysemic laugh held in check, unusually). This may be the origin of the odd cliché that those in flight from a life of crime always go to work in garages. Aline makes a surprising grease monkey, but she makes you believe it. And the close, pre-storm heat is palpable as her past catches up with her. —David Cairns

The Bowery (Raoul Walsh, 1933): THERE'S VICE ALL RIGHT—SQUEEZIN' SKIRT INNA SKOIT: Women from a temperance league taking hatchets to a gents' room door: on paper one might presume such an image of genital wit belonged to a film signed Lubitsch—but no, its author is Raoul Walsh. Surprising? Hardly; one feels Walsh's artistry in the testicles. Female viewers be not marginalized. For it might do to label The Bowery (feminine root and—we get it) an example of the phantom appendage—concomitant with the scrotal moiling of frames abuzz in public-house action, god's-eye Assayas which registers above all a sense of vicarious Exchange: on one hand we witness the inkling of the globalized city of 1895, distant still from Von and the death of Trish Keenan, a gulch with Fay Wray passed among men, and Jackie Cooper ("Swipes McGurk") between surrogate dads. The entire picture's a light investigation of the cover-it-up: Who among men saw George Raft's leap off the Brooklyn Bridge? Who witnessed his and Wallace Beery's barge-fight? Print it or don't, cares not the public ayelp. And then the second thing to bear in mind when you watch The Bowery is that this is Wallace Beery's and Jackie Cooper's second team-up masterpiece after King Vidor's open-air resplendence named The Champ, released two years earlier. Opportune time for rediscovery of authors and actors.﻿  —Craig Keller