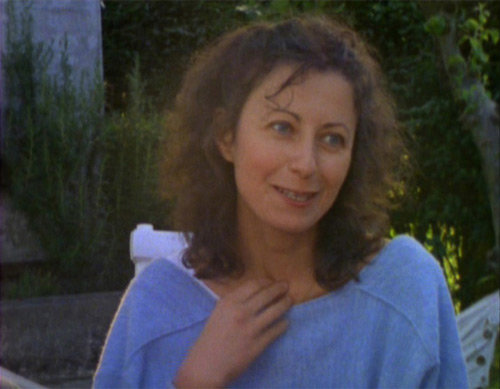 Crystallizing various facets of his Comédies et Proverbes cycle while radically departing from others, the diaristic 1986 beauty Le rayon vert is one of Éric  Rohmer’s greatest studies of light, voices, and mercurial human sensation. Delphine (Marie Rivière) has the look of a doleful sylph and the torturous task of searching for enjoyment after plans for her summer holiday are abruptly cancelled. Cherbourg, the Alps, and Biarritz are some of the spots the Parisian secretary passes through, but she’s no innate adventurer: She literally runs away from potential suitors and gets woozy easily (no meat, no sailing, no swings), friends compare her to a plant and to the Capricorn goat alone on the mountain, “sort of in transit” is her own description. The protagonist’s comic sidekick in anybody else’s film, here she’s an achingly demanding woman as determined to have love on her own terms as Dreyer’s Gertrud. Strolling down a country road, a small patch of blue surrounded by the gently weaving verdure, Delphine finds herself quietly sobbing—a breathtaking vision of quotidian despair that gives lie to the image of the director as a low-key wordsmith, and showcases his close synergy with the main actress. (Rivière reportedly collaborated extensively with Rohmer in setting the tone of scenes, and the ensuing flares of improvisation seem to stimulate his delicate yet scalpel-sharp empathy toward the character.) A brush with a beaming Nordic siren, the sensuous grain of Sophie Maintigneux’s 16mm cinematography, a microcosm of signals—cards on the street, Jules Verne at the beach, Dostoyevsky at the train station—fused together in a spark of metaphysical illumination: “A question of awareness,” that’s it. The final scene is the suspense sequence of the decade, a miracle at sunset where, like Ingrid Bergman confronting the Stromboli volcano, Rohmer’s heroine gazes directly out at the world and within herself and receives the deliverance of self-recognition. Her tears are ours.

A new print of Le rayon vert is touring the country courtesy of The Film Desk, and is currently playing through June 15 at BAMcinématek in Brooklyn.