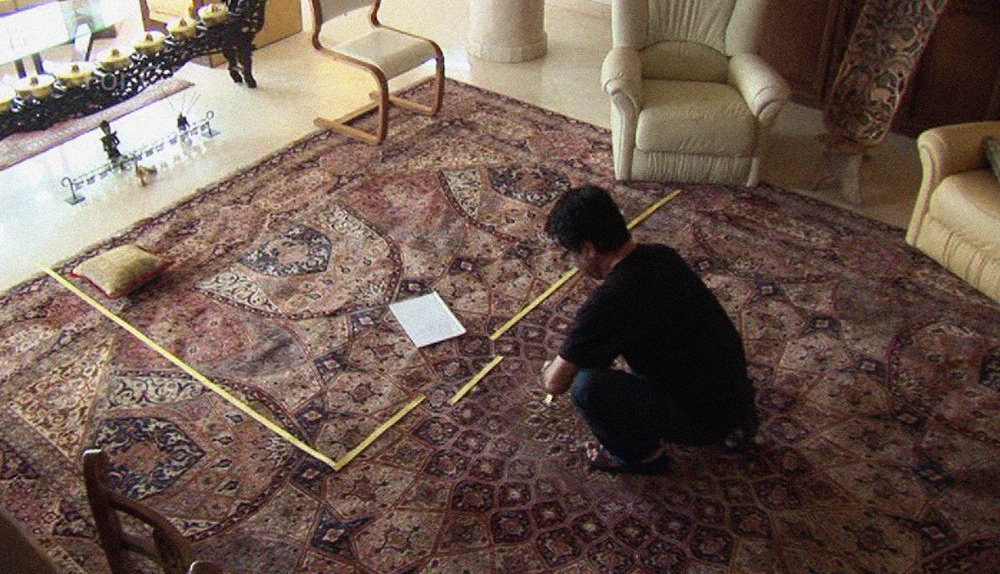 The film of last year's Cannes film festival, This Is Not a Film, was reported to be smuggled to the Croisette via a cake from Iran.  The humble, ingenious origins are fitting for this sweetly sad video diary created in a collaboration between repressed and imprisoned Iranian auteur Jafar Panahi and director Mojtaba Mirtahmasb﻿, and it meditates with touching simplicity on the very nature of filmmaking (which Panahi is currently banned from, for 20 years) and on Panahi’s isolated existence in Tehran.

Folding in on itself repeatedly, the film begins as a self-shot video of Panahi staging speakerphone conversations with friends and lawyers about his current situation—created, in rough estimate, in February 2011.  But he quickly sees through his own acting—an evaluation not as the director of the film but as an actor acting in it, acting falsely.  In steps Mirtahmasb﻿ who helps Panahi conceptualize a different way of visualizing his house arrest and inability to film—namely, to movingly evoke his last officially rejected screenplay by re-staging it and reading it in his living room.  Panahi remarks that while he may not be able to direct films no one is stopping him from acting in them or reading screenplays.  And, to prove a greater point, the filmmaker takes out distressingly weathered looking DVDs of his own films (from a shelf whose only visible title is Ryan Reynold’s Buried) and shows how in one scene an actor dictated the film’s direction, in another how the space dictated the actor’s acting, and in a scene from The Mirror how the response of an actor changed the entire production.  In short, Panahi, with a humble admission behind which is a baffled desperation, proves that everyone involved on a film set is making a film, that all are complicit and are creative, all directors in their own right.

Explaining his blocking and direction on his "film set" of tape placed on his living room carpets, Panahi gets repeatedly choked up, and whether his emotion is being felt as a director unable to direct an actor who is not there or as an actor unable to direct a filmmaker who has been banned is an ambiguity that pierces through the film straight to its heart.  The idea is simply, truly, that what is behind the camera directs as much as what is in front of the camera.  In this film, Panahi is not allowed to direct, but he acts, and the set is his home, and his home is in Iran, and all these things direct the ideas, the feel, the expression of the film.

The re-enactment of the script stutters because of Panahi’s doubts and his emotions, not to mention his and Mirtahmasb﻿'s masterful touch that knows when to step back from this gracefully forlorn one man production of domestic imprisonment and provide a little humor or breathing room.  Most of the outside world is evoked in absences, phone calls and unseen women (who they are unable to shoot because the majority of the movie takes place indoors), fireworks popping like gunshots outside, a yipping dog.  Inside the apartment, there is only the actor (Panahi), the director (Mirtahmasb﻿), the cameras and a beautiful, friendly iguana that crawls around Panahi like a cat moving in slow motion and, in the film’s most tremendous shot, sneaks behind a book case and starts to climb it from behind in some kind of strange, surreal domestic allusion to where such subversive art as This Is Not a Filmexists, where its filmmakers reside, how they and their art moves in the world.

The final portion of the film absorbs Mirtahmasb﻿'s documentary into Panahi's fiction, with Panahi taking up the camera again himself—notably after trading, back and forth, short and reverse shots with his co-director from HD video to iPhone, the observer becoming the observed, the prisoner the filmmaker, and vice versa—he takes it up and leaves his apartment for a sequence as funny as it is unsettling as he chats with his building’s mysterious temporary janitor in an elevator that is going down, all the time getting closer to the explosions popping outside.

Those sounds, beginning early in the film, initially seem like gunshots, but a later news report re-contextualizes them as fireworks from an illegal anniversary of a protest.  Is it a celebration outside or a warzone?  The sounds, the explanations, and even eventually the vision—Panahi and the film leaving the interior as much as they possibly can, and still remaining behind iron bars of the building's compound—is left to an ambiguous imagination.  And that, perhaps, is the ultimate state this wonderful artist tragically resides in—uncertainty.  And his and Mirtahmasb﻿'s film, using the barest means but inspired by their art, their passion, and their existence in the world, have crafted one of cinema’s rare masterpieces of truth.﻿

This review originally appeared in our coverage for the 2011 Cannes Film Festival.

This Is Not a Film