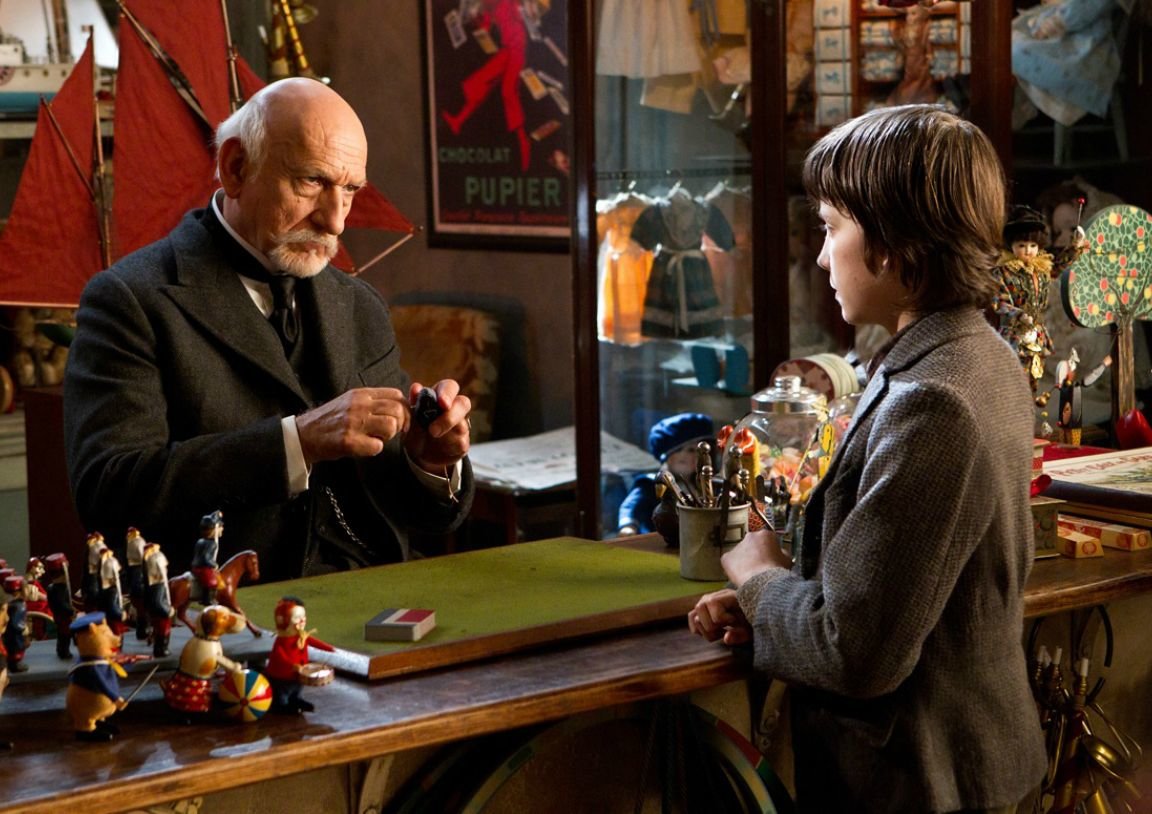 Reporting on the original 3-D outbreak in 1953, Manny Farber wrote of the technique’s visual potential: “Along with the sharpening of the outline of bodies, there is an effort to clarify the feeling of negative spaces—the spaces in a composition that are more or less unfilled.” Nearly five decades later, Martin Scorsese employs the technique to leave no space unfilled. In Hugo, he introduces the setting—Paris’ Montparnasse train station circa 1931—with an impossibly vertiginous, digitally-lubricated zoom that races past costumed passengers and smoky locomotives until it comes to rest on the retina of the eponymous orphan (Asa Butterfield). As sparrowish Hugo hides between the station’s meshing gears and tends to its many clocks, no chance is missed to endow images with a sense of depth: Diagonals and curves are the preferred forms, snow falls and pages flutter as if inches away from the 3-D glasses, a Doberman pinscher’s pointy snout just about pokes out the eye. Most striking, and most appropriate for the film and the filmmaker, is a shot set on a movie theater attended by Hugo and his young sidekick Isabelle (Chloë Grace Moretz), where the shaft of light emanating from the projection booth hits the camera’s eye and for a second or so floods it with lambent, flickering blue.

The look on the bookish Isabelle’s face as she watches her first movie (Harold Lloyd in Safety Last!) crystallizes what Scorsese is after: The feeling of a virginal gaze being ravished by the harmonizing of the antique and the ultramodern. Cinema can do that, and cinema is Hugo’s subject. As in Inglourious Basterds and The Strange Case of Angelica, its signals and ghosts are everywhere. There’s the pensive, silvery automaton with the heart-shaped lock, at last communicating not with words but through images. There’s the train station, not only the center of the cinephile filmmaker’s innumerable citations (Grand Illusion, La Bête humaine, Brief Encounter, Madame de…) but also a Rear Window-style crisscross of small narratives (people courting each other, people getting themselves arrested, people remembering their war losses) that the boy watches through wall openings. And there’s Georges Méliès (Ben Kingsley), the medium’s pioneering conjurer now selling wind-up toys, forgotten and rancorous. His portrayal as a jolly wizard soured by the public’s dwindling interest in fantasy somewhat simplifies the fascinating contradictions of Méliès’s films, the way his illusionism could function as documentary records of the magician’s craft, just as the Lumière brothers’ actualités could strike one as Rivettean compositions of mysterious depth.  Still, the spectacle of the old man (the embodiment of a fragile art) stirred and rejuvenated once his work is dusted off and experienced communally is a beautiful illustration of the famous Scorsese saying about remembering movies being akin to remembering people.

A proudly mechanistic work, Hugo could be a lost René Clair picture made between Le Million and À nous la liberté﻿. Its restless phantasmagoria—part heightened Dickensian theater, part steampunk Belle Époque—is fond, melancholy, and not quite serene. (The streamlined designs of Dante Ferretti’s elaborate sets betray a hint of the volatile: The train is gorgeous, yet it can leap off its tracks and tear through the scenery.) The scenes dealing with the children’s searches are perfunctory (though Butterfield and Moretz amusingly suggest a storybook version of the peppery interplay between Alfred Lutter and Jodie Foster in Alice Doesn’t Live Here Anymore), and Sacha Baron Cohen as the comically inept stationmaster works best as an element of the visual palette—a series of cobalt verticals—than as a fountain of slapstick whimsy. When it envisions the bond between art and lived life and mingles the textures of silent-film celluloid and digital apparitions, however, the evocation of cinema as “seeing your dreams in the middle of the day” is something to behold. Scorsese luxuriates in artifice, but at its generous best Hugo offers a lovely instance of technology made human and spun from one generation to the next.﻿﻿