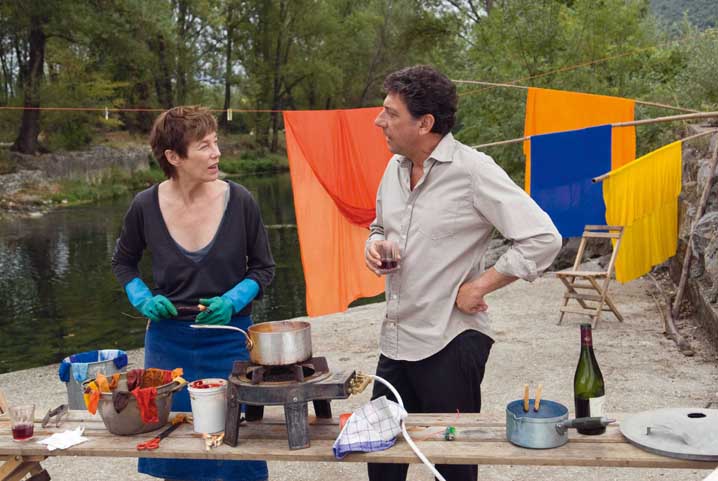 Stepping out of the sullen romantic echo chambers of Balzac and the Bourbon Restoration in Ne touchez pas le hache, Jacques Rivette moves into the light with a gentle, simple masterwork, Around a Small Mountain (36 vues du Pic Saint Loup). In this airy film of drifting whimsy muted by melancholy, Jane Birkin stars as a traumatized ex-circus worker who has returned to her family’s tiny traveling show, rescued on the roadside at the film’s beginning by a curious wanderer played by Sergio Castellitto.

The circus travels around small towns—from the French title one might assume that the tour is circling the mountain Rivette lends a simple mythical quality to—setting up its modest tent and curling its caravans around each location like a wagon circle at ease.  Birkin is casually, curiously courted by Castellitto in brief, enigmatic conversations that play just like the abbreviated bits of the circus acts—comedic sketches, juggling, and acrobatics—Rivette mysteriously teases us with, suggesting life not just as acting as an on-going act.

Drifting around the town, around the circus, around real relationships, the whole atmosphere is one of limbo; like recent Straub-Huillet, Around a Small Mountain's characters aren't humans but gods wandering our land, not quite in, not quite out.  Only, gods like Jane Birkin are a little less sure of their place in this world of ours, and she glides through the film in a kind of self-contained and abstract sorrow and quietude from town to town, performance to performance.   She wanders, lost; Castellito wanders, curious; and this simple duo make for a sweet, elegant, and wry look at romance, at vocation, at mourning, at theater, at life.

The scenario is the barest sketch, united by, as Castellito says at the end of the picture, a simultaneous fear of and pleasure in the freedom of the circus ring, an analogy for Rivette's cinema and its view of the world.  But mostly Around a Small Mountain is not about the center but about the sidelines of life, about skirting that center of endless possibilities—thus the circus remains on outskirts of the world and its performers and devotees seem to exist on the outskirts of the circus itself.  It’s a film with a great deal of space and air and relaxedness, of Birkin’s marvelous, bodily persevering melancholy, and Castellitto’s sudden gestures and romantic patience, persevering too, in his own way.

This is Rivette’s most abstract work, the one most related to his praise of Fritz Lang’s Woman in the Moon, which saw in sci-fi film the ability to create an entirely closed world.  Rivette’s new film, an outer space movie in its own way, by contrast seems infinitely open, taking place in the farthest reaches from the real world.  Out in the light of nature (even inside the circus tent you feel like you are outside) this perennially grim filmmaker—who masks the dark of the world with the play of cinema—has made a movie that finally seems to remove and nearly efface itself from worldly concerns, eulogizing in a most beautiful way simply the way people move through, and around, the play of life.