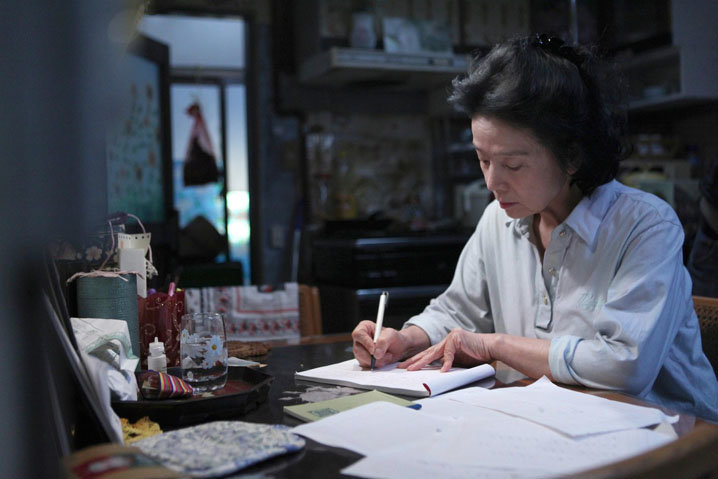 Back in May, days before Lee Chang-dong would win a Best Screenplay award at Cannes for Poetry, the Hollywood Reporter introduced its interview with the director: "The heroine in Poetry is a sixty-something woman named Mija (played by Yoon Jeong-hee) who rears a grandson and nurses an elderly neighbor to support herself. One day, she signs up for an amateur poetry class and, as she tries to write her first poem, learns her grandson was involved in the gang rape of a local schoolgirl. 'There's no particular theme in this film,' Lee says. But the word 'poetry' emerging from the film's opening image of a dead body floating on tranquil river brings to mind the loss of innocence seen in such earlier Lee works as Peppermint Candy and Green Fish."

"The set-up suggests another recent NYFF title from a new Korean auteur," writes the L's Mark Asch, "but where the matriarch of Bong Joon-ho's Mother dominated the narrative along with the investigation of her son's (alleged, in that case) crime, Mija is slipping — bullied for money by the status-panicked fathers of her grandson's friends, and stopping to look at the flowers, or to contemplate how pretty the fruit that has fallen to the ground in its own time."

"Poetry allows the threat of Alzheimer's to exist as a very real character trait, part of this woman's shifting emotional makeup," writes Michael Koresky in Reverse Shot. "This is a woman already robbed of a voice; that she will also lose her thoughts is an unimaginable cruelty. Yet Lee never dwells on this tragedy, instead embroiling Mija in a complexly woven plot that grants her control over her decisions at a moment before she loses that control. Mija's ultimate decisions in Poetry function as a moving correction to the blind, agonized foolishness that overtakes the protagonist of Mother, which leads her to a kind of purgatory. Where Mija's heading is more ambiguous — her future has been cruelly, cosmically preordained. We know that soon enough she will lose faculty of her speech, then body; her family and friends (in this case already shadows) will be unrecognizable to her; her mind will become a sort of prison. For now Lee grants her supremacy."

"Lee Chang-dong, who coaxed such a wondrous performance out of his lead actress in Secret Sunshine, performs similar magic again," writes Nathaniel R. "Jeong-hee Yoon, who came out of retirement after 16 years for this role, is a wonder as Mija, beautifully fleshing out this woman's high spirits, kindness, and fears. Yoon's nuanced performance manages to reflect all of this within Mija's ever present curiousity. Mija seems to instinctively understand that her endless curiousity will fill her life with both more beauty and more sadness."

"Lee (Oasis, Secret Sunshine), a storyteller of remarkable power and fluency, packs his tale with startling plot twists and sudden eruptions of deep feeling," writes Nelson Kim at Hammer to Nail. "Poetry is as ethereal and delicate as a snowflake one moment, as brutal as an autopsy the next — an ever-shifting, ever-surprising wonder."

But for Time Out New York's David Fear, Poetry "isn't the best introduction to his work. The director can certainly produce moments of curdled beauty — consider that opening shot of a floating corpse — but the lack of a tonal balance among the film's weepie story line, character-study elements and lurid attempt to examine the evil within leaves you wanting. It's an interesting minor effort; you're better off seeking out his earlier major ones."