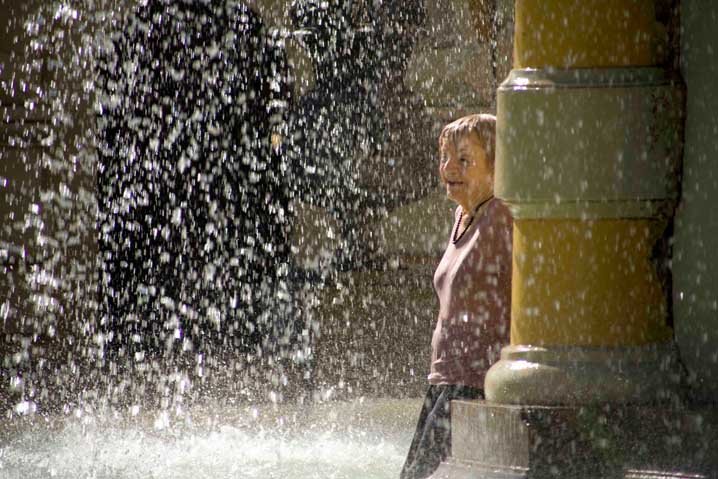 "Sebastián Silva and Pedro Peirano's Old Cats — like Silva's last directorial effort, The Maid, which Peirano co-wrote — walks a fine line between empathetic treatment of its characters and voyeuristic freakshow gazing," writes Andrew Schenker in Slant. "If it's the latter that ultimately wins out, particularly in regard to the elderly Isadora (Bélgica Castro), battling both oncoming dementia and her daughter's demands to sign over her apartment, then it's at least partially balanced by a tendency to view this principal character with a measure of non-condescending understanding."

Time Out New York's David Fear finds that "that the young filmmaker needs something more substantial than gold-digging, coke-snorting girlfriends (played by The Maid's master-and-servant duo, Claudia Celedón and Catalina Saavedra) or an elderly mother (Bélgica Castro) descending into senility to bring out his best. As one half of the couple tries to bilk her mentally unraveling mom, long-standing grudges and power plays take on an Albee-esque flavor that nonetheless lacks a distinctive bite."

"If nothing else," writes Kenji Fujishima at the House Next Door, Old Cats "is distinguished by one scene near its climax that manages to wring a surprising amount of heart-stopping suspense out of the simple act of an elderly woman trying to go down the stairs. As we see her struggling mightily whenever she moves her feet down a notch, each step becomes a life-or-death proposition, as thunderous in impact as the most overt act of physical violence. The sequence works not necessarily because of any special cinematic innovation on the part of its directors, but because of how well Peirano and Silva have been able to involve us in the drama of its characters up to that point.... Old Cats may not be much as cinema, but its clear-eyed, empathetic understanding of the agonies of aging and the frustrations of familial relations is nevertheless worth noting and celebrating."

"Castro is astonishingly vivid," finds Reverse Shot's Michael Koresky: "across her tactile, toadlike features are a universe of secret smiles, grimaces, and inscrutable flashes of recognition and fear. If these early scenes between Isidora and Enrique [Alejandro Sieveking], united also in their need to down a seemingly endless series of pills as part of their morning routine, feel remarkably lived in, perhaps that's because, after a search, the filmmakers settled on shooting in the actors' (married in real life) apartment. It's a delightfully cramped space that becomes a character all its own.... [T]he home becomes a source of anxiety as much as a place of protection, a canvas upon which a series of fraught confrontations and shifting allegiances will be violently painted."

For Ed Champion, a "strange need to tie it all together... to provide an answer to everything is what ultimately simplifies an initially charming domestic mystery."

But for Tom Hall, this is "a must-see and, despite Silva's refusal of a 'Chilean cinema' when I asked him about his feelings during the press conference, marks yet another terrific film from Chile (that makes three of them in the last month), a sign that the government expansion of its investment in cinema is certainly paying off."