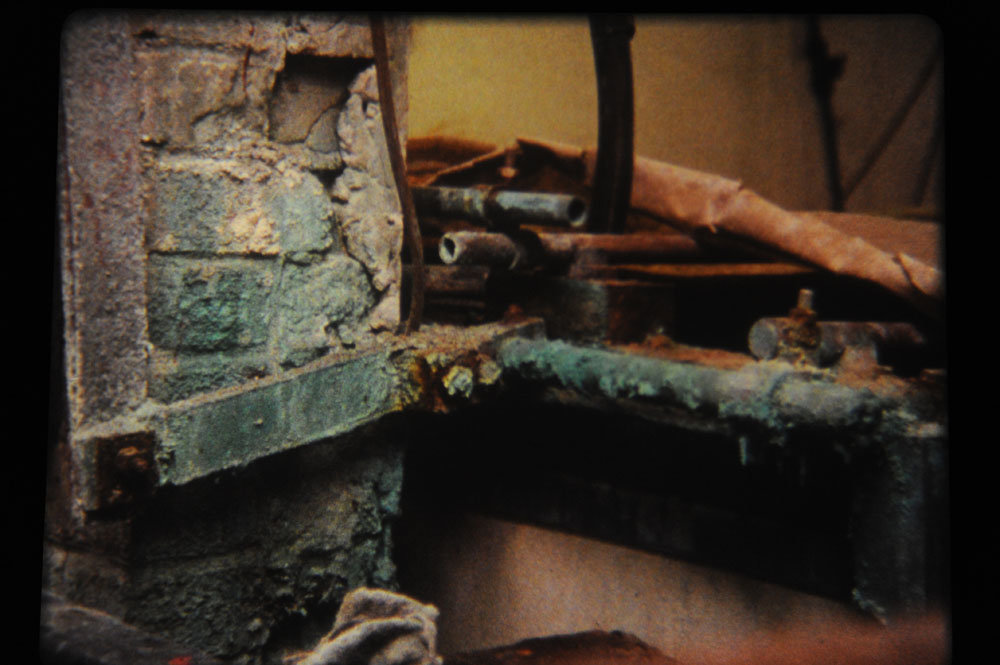 In Monday's Briefing, I devoted a couple of paragraphs to Ben Rivers, and today sees a double bill of Sack Barrow and Slow Action, followed on Monday by a screening of Two Years at Sea, all, of course, as part of the New York Film Festival's Views from the Avant-Garde program.

"Ben Rivers makes work that celebrates the simplest virtues of craft, self-reliance, and the solitary life in the face of a future that may expunge all traces of humanity," writes Tony Pipolo for Artforum. "Sack Barrow, dedicated to the workers in a factory that had engaged in metal electroplating and finishing since 1931, was filmed during its last month of operation in 2010. Though the site appears old and grungy, the colors and compositions of every shot are anything but. To stress this painterly quality, Rivers inserts full frames of vivid red, yellow, green, and blue that also reflect the heating and cooling stages of the work. No interviews explain the work in any detail. We do get glimpses of it, but Rivers is less interested in documenting a process than in capturing the atmosphere — popular music streams from radios or recorders; cheesecake photos are generously displayed on walls and lockers — and in extracting the physical beauty in rusty surfaces and corrosive decay. These indelible images — especially those of objects deformed by toxic chemicals — evoke comparable artifacts of antiquity."

In Slow Action, "Rivers approaches the natural world not as documentarian but as explorer," writes Livia Bloom for Filmmaker. "He visits four remote islands: Lanzarote, a bone-dry Canary Island that he describes as 'full of dead volcanoes and strange architecture'; Gunkanjima, a now-deserted island off the Japanese coast; Tuvalu, a Polynesian island that seems on the verge of being swallowed by the Pacific Ocean; and Somerset — not the island of Nunavut, uninhabited ice cube in northern-most Canada, but Somerset London, the place from which Rivers hails and has here transformed into a fictive foreign nation all its own. The piece is available to watch online, along with work by [Apichatpong Weerasethakul], on the website Animate Projects, yet if the chance to see it on the big screen presents itself, viewers will find that benefits from luxurious big screen viewing in all its 16mm glory."

"Two Years at Sea neatly straddles the boundary between documentary and experimental film," writes Kristin Thompson. "It appears to be a portrait of an eccentric middle-aged man, Jake, living by himself in a sprawling house in a Scottish forest…. Jake makes an excellent subject, almost never glancing at the camera but simply performing his chores, relaxing, or hiking in an unself-conscious way. In the final lengthy shot, he falls asleep on camera. Yet in fact, as we can know only through the program notes or during the filmmaker's Q&A, Jake plays a somewhat fictionalized version of himself. (The real Jake is more gregarious and welcomes guests.) Rivers suggested some things that his subject might do, and Jake agreed: taking a shower, building a raft from which to fish on a local pond, and mostly notably, raising a small trailer into a pine tree to form a sort of tree house. The framing of the shots showing the trailer rising through the branches hides just how this was accomplished, resulting in a touch of magic realism."

"If you want to know what it all means, in the conventional sense of those words, Mr Rivers won't oblige," writes Manohla Dargis in the New York Times. "Two Years at Sea may be a portrait of a hermit or a modern-age gloss on Thoreau's Walden, but the filmmaker doesn't say on screen. He doesn't need to: as with the other, more abstract work in Views, interpreting Two Years at Sea is far less important (or necessary) than watching it, experiencing the film as it happens instead of trying to wrest meaning from it. What counts is the fog that wreathes the trees, the bloody folk song that the man plays on a record player, the slight pulsing quality of the images and the way that another person's seclusion can feel like an oasis."

And Kenji Fujishima at the House Next Door: "Surely immersing ourselves in nature in such a wholehearted manner will transform the way one views the world around us, allowing us to notice things in our environment in ways that we may not always perceive in a urban or suburban environment; in other words, the kind of environment in which we in the audience would most likely see a film like this. At its best, Rivers's film embodies that profoundly open mindset."﻿

Update: Rivers's "chosen subjects and methods have led critics to characterize the shorts as experimental ethnography, or landscape film, but they carry a piquant air of unreality," writes Colin Beckett at the BOMBlog. "In interviews, Rivers frequently cites an interest in science-fiction, and in early works like Old Dark House (2003), Terror! (2006), and Alice (2009), he explores the atmosphere of horror films. From his study of these genres, he learned the unsettling effects he deploys in his non-fictions."﻿