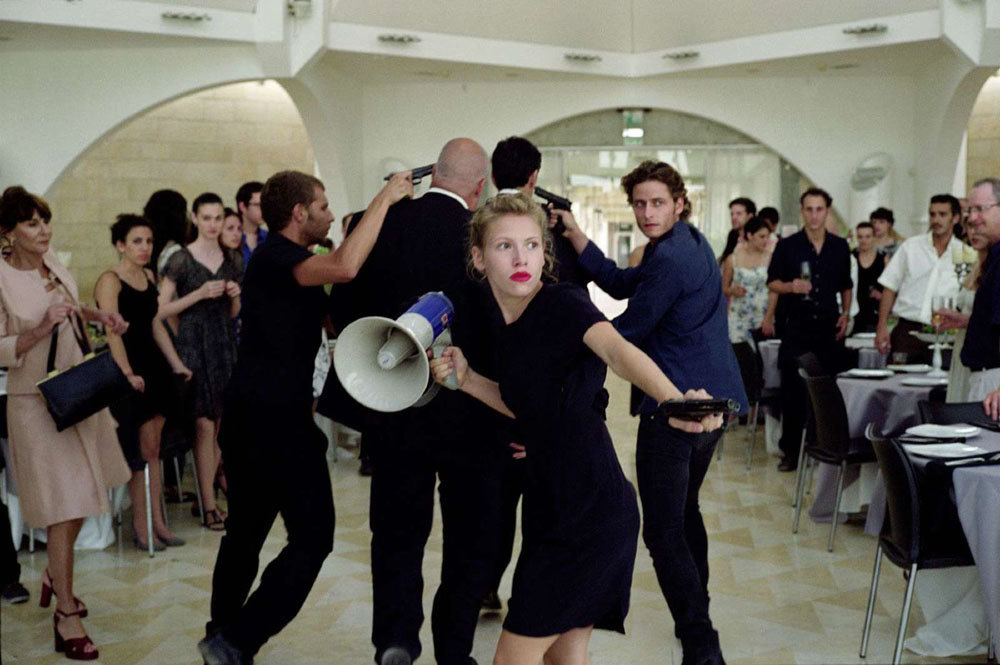 The 49th New York Film Festival wraps today, and way back before it began, the Voice's J Hoberman selected "5 Must-Sees." Nadav Lapid's Policeman, "presenting an Israel that is even more balkanized" than the Israel seen in Joseph Cedar's Footnote, is one of them: "Two violent, violently self-absorbed tribal groups — one a highly disciplined elite police unit, the other an anarchic band of left-wing Jewish terrorists — find each other at a billionaire's wedding in contemporary Tel Aviv. It's ultra-macho muscle Jews versus fanatical neo-narodniks."

"Lapid's stewardship in the lead-up to that confrontation is remarkably assured, capturing an ever-present atmosphere of clique-ish camaraderie and pent-up fury and fanaticism through intense close-ups and vivid compositions of dynamic tension," writes Nick Schager in Slant.

"In a Q&A after the press screening," notes Elise Nakhnikian for the L, "Lapid explained the logic behind his unusual and effective way of showing the two groups consecutively rather than cutting between them from the start. He dispensed with the parallel cuts, he said, because he didn't want the focus to be on when or how the two groups would meet. 'The question for me was, who are these people? Who are these groups? I tried to describe their existential essence.'"

"Lapid holds his camera back with the cautious reserve of a documentarian, letting action play out at its own pace rather than jumping in with cuts and pans," observes Anna Bak-Kvapil at Fandor. "Although he populates his film with intense, good-looking people, he uses close-ups sparingly, and eschews shot-reverse-shot almost entirely, instead filming only profiles, or allowing one face be obscured."

"There's a faint whiff of early Michael Haneke (mostly 71 Fragments of a Chronology of Chance) permeating the entirety of Policeman," finds Christopher Bell at the Playlist, "especially with its explosive bursts of violence and general coldness. But unlike other disciples of the Austrian professor, it never feels like it's aping him but instead working with the same mindset; driving along on a parallel road."﻿