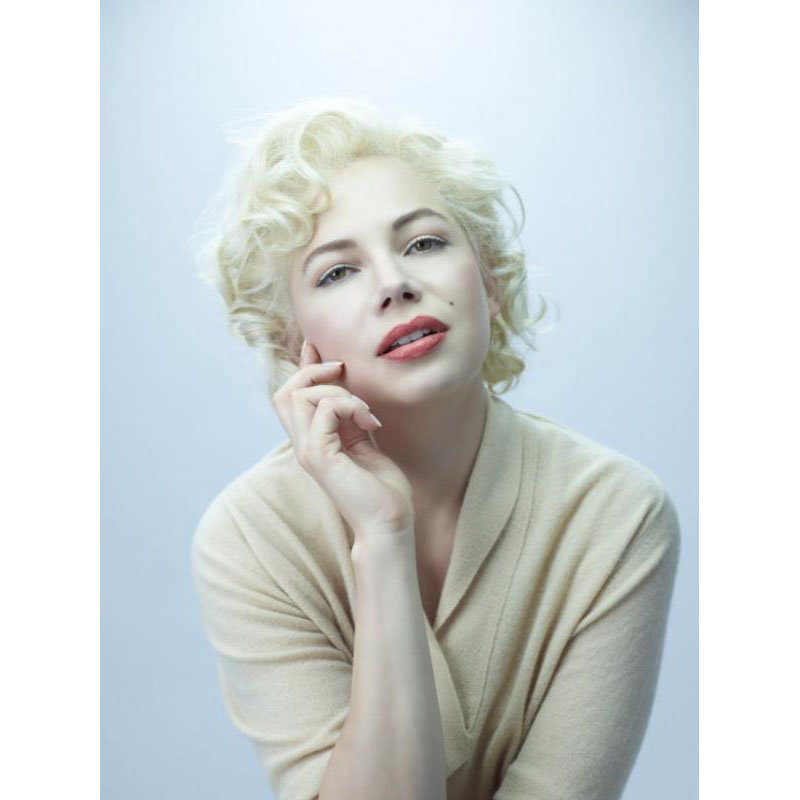 Screening as the Centerpiece Gala at this year's NYFF, Simon Curtis's My Week with Marilyn is, for Miriam Bale, writing at the L, a "predictable, schlocky first love story about a rangy Eton boy's bildugsroman heartbreak by — here's the twist — Marilyn Monroe (Michelle Williams), while working as Lawrence Olivier's assistant on The Prince and the Showgirl in 1950s London. Williams seems a great actress because there's nothing there to begin with, so any character she plays takes over her body and soul so completely that every role seems a conjuring act. She is particularly suitable, then, for not only reproducing Monroe's reflection accurately, but exactly replicating Monroe's blank 'fuck me' photoshoot face, the look that made Monroe such a hugely fuckable star. This blank canvas for male fantasy will no doubt make Williams a much bigger star, too," but: "The secret star of the film is the DP Ben Smithard, who exactly replicates certain Monroe images buried just under our collective Western consciousness." You may remember that just a few months ago Miriam put "Marilyn on the Couch" and wrote of her performance in The Prince and the Showgirl that "what was construed as her power, was actually powerlessness outside of her control."

In My Week with Marilyn, "Monroe exhausts the vexed Olivier (Kenneth Branagh), alienates her new husband Arthur Miller (Dougray Scott), captivates her great British co-star Dame Sybil Thorndike (Judi Dench), and is the perfumed gust that sends Olivier's wife Vivien Leigh (a beautifully vulnerable Julia Ormond) tumbling over the precipice of middle age," writes Movieline's ST VanAirsdale, who has notes from the press conference. "Fully aware of and thoroughly destabilized by her effect on this pedigreed class, Monroe's confidence in Clark [Eddie Redmayne﻿] comes as a threat to some and a surprise to all."

The film "might more accurately be titled My Week Of Seriously Thinking I Had A Reasonable Chance of Having Sex with Marilyn Monroe," suggests Vadim Rizov in Box Office. "Incompetently assembled by veteran TV director Simon Curtis in his theatrical debut, Marilyn's so flimsy and low-stakes not even Williams's typically rigorous dedication and performance can lift it."

"Williams is, in fact, superb. The Siren has lost count of the actresses she's seen playing Monroe, but Williams leaves them all in the dust. She takes the most imitated woman of all time and manages a performance that recalls every gesture and effect, while still creating a character. It's a remarkable feat of acting, and Branagh's work, despite his having to spend too much time musing out loud about Marilyn, is still right up there with Williams. But what shall it profit an actor to give a good performance in a movie this trite?"

Adam Green's profile of Williams for Vogue is accompanied by photographs by Annie Liebovitz.

"Suddenly Marilyn is everywhere," and Austin Considine explains why in the New York Times: "In December, Authentic Brands Group, which is based in New York, acquired exclusive rights to Monroe's likeness, image and estate." And they plan to "take Monroe's image upscale."﻿

Update, 10/15: "I wondered what Ernst Lubitsch or Preston Sturges or Howard Hawks might have done with this material, reworked as fast-talking comedy," offers Elise Nakhnikian at the L. "Just think of the possibilities: A wildly popular and hopelessly insecure actress crosses the ocean to make a meretricious piece of junk with a bunch of aging theatrical stars to show the world that she can act, but all she does is inadvertently prove that the stage actors can't hold a candle to her on film. Meanwhile, a star-struck kid goes gaga over the actress and tries to 'save' her from the profession she's trying so hard to be worthy of. Come to think of it, it's just the kind of role Monroe would have played the hell out of."﻿

Update, 10/18: "[P]redictably dull," sighs Genevieve Yue in Reverse Shot, "and My Week with Marilyn seems imbued with the same stuffy pomp that plagued Olivier and his crew. Outside of Williams, the rest of the venerable cast is squandered, effectively reduced to expensive, one-dimensional set pieces."﻿