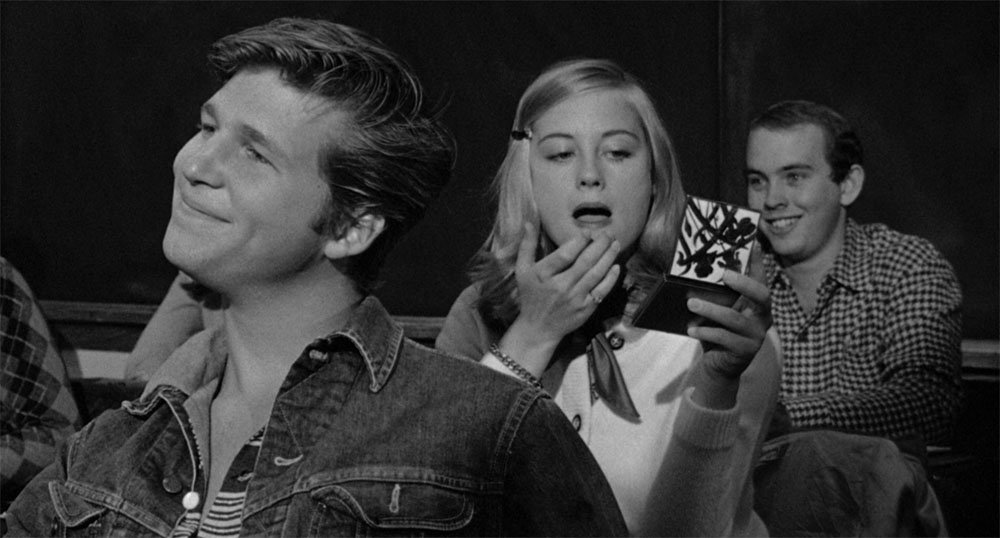 "Pouring the new wine of Young Hollywood's freshly gained permissiveness concerning depictions of sex and obscenity into old bottles borrowed from the cellars of classical Hollywood cinema, which is to say, these older films' expressive visual grammar and obliquely suggestive dialogue, The Last Picture Show, adapted from the Larry McMurtry novel by McMurtry and director Peter Bogdanovich, delineates the quiet, desperate lives of the citizens of Anarene, Texas over the course of one year in the early 1950s." Budd Wilkins in Slant: "Bogdanovich, a one-time film critic and historian, drew formal and technical inspiration from years spent programming films from Hollywood's Golden Age for MoMA, as well as taking advice from houseguest Orson Welles when it came to shooting the film in black and white, or employing long tracking shots rather than breaking up important scenes. As Welles reportedly put it, 'That's what separates the men from the boys,' and it's advice Bogdanovich clearly took to heart."

New York's Film Forum will be screening The Last Picture Show (1971) for one week starting tomorrow, and Alt Screen notes at the top of its excellent roundup that this is "also a choice time to salute Boganovich's first wife Polly Platt, who passed away in July. A successful producer (Broadcast News, Bottle Rocket) and Oscar-winning production designer (she is responsible for Picture Show's haunting setpieces), Platt steered Bogdanovich towards some of his best material, including Larry MacMurtry's elegiac novel. As documented in George Hickenlooper's 1991 documentary on the film's production, Picture This, Platt did Cybill Shepherd's hair and makeup every morning – even after her husband had left Platt for the Southern starlet. Some would argue his career was never the same. Platt was a class act and underlooked figure — you can read her New York Times obit here."

Joshua Rothkopf in Time Out New York: "The Last Picture Show is mainstream cinema at its most empathic, attuned to real economic anxieties — Ben Johnson's weathered local proprietor is the heart of the story — and flattering to an audience's intelligence. It's meant to make you feel sad for what's lost, but a vitality throbs through it. Most landmarks from the 1970s would never get greenlit today; this one gets remade in some form or another (TV's Friday Night Lights, the music of Arcade Fire) on a weekly basis."

"High schoolers intersect with elders around the great-looking black-and-white Texas desolation and period detail, across subtly skipping times and not-so-secretly pursued desires," writes Nicholas Rapold in the L. "Timothy Bottoms still wears a mask of sheepishness and resignation, Cybill Shepherd is the perfect projection to drive Jeff Bridges's Duane to distraction, Hank Williams virtually replaces the sound of wind, and so on. But with every missed chance so meticulously mapped, are all their guilty pleasures really a guilty pleasure?"﻿