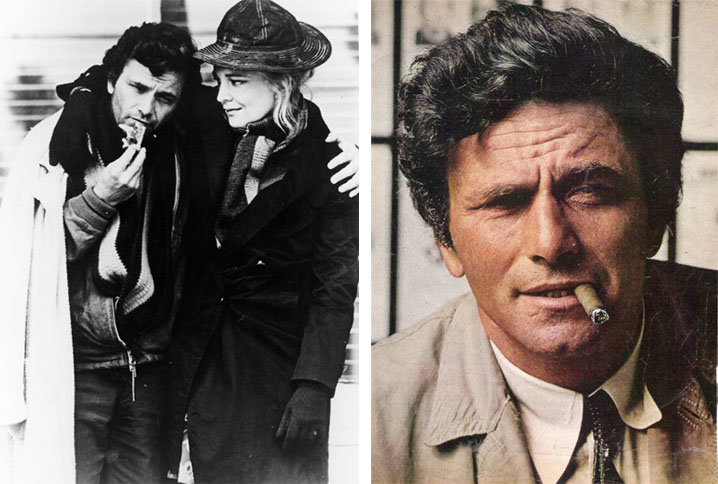 "Peter Falk, the stage and movie actor who became identified as the squinty, rumpled detective in Columbo, which spanned 30 years in primetime television and established one of the most iconic characters in police work, has died. He was 83." Anthony McCartney for the AP: "Falk made his film debut in 1958 with Wind Across the Everglades and established himself as a talented character actor with his performance as the vicious killer Abe Reles in Murder, Inc. Among his other movies: It's a Mad, Mad, Mad, Mad World, Robin and the Seven Hoods, The Great Race, Luv, Castle Keep, The Cheap Detective, The Brinks Job, The In-Laws, The Princess Bride. Falk also appeared in a number of art house favorites, including the semi-improvisational films Husbands and A Woman Under the Influence, directed by his friend John Cassavetes, and Wim Wenders's Wings of Desire, in which he played himself."

Last November, the New Yorker's Richard Brody looked back on "the appearance on [Dick] Cavett's show (recorded September 18, 1970, and aired three days later) of John Cassavetes, Peter Falk, and Ben Gazzara, the three stars of Cassavetes's yet-unreleased (and great, and amazingly influential) film Husbands, who were there to promote it and instead did things on television that few people imagined you could do on television." And he argues that "the trio's performance shows exactly why Husbands is a great movie, and the broadcast, with its sloppy and raucous bonhomie, is just a great event."

"[I]t was his role as the blue-collar family man trying to deal with his mentally unstable wife (played by Gena Rowlands) in A Woman Under the Influence that he created what former [Los Angeles Times] film critic Charles Champlin called 'one of the most complex and contradictory portraits in his career,'" adds the LAT's Dennis McLellan. "But nothing Falk did came close to matching the acclaim and popularity he found playing the title role in Columbo, the crime-drama for which he won four of his Emmys…. The format of the series, created by Richard Levinson and William Link, inverted the classic detective formula: The TV audience already knew whodunit when Columbo arrived on the scene of the crime. The enjoyment for viewers was in seeing how Columbo doggedly pieced the clues together. As he said in one episode, 'I have this bug about tying up loose ends.'"

"He was nominated for two Oscars," notes Bruce Weber in the New York Times — they would be for Murder, Inc. (196) and Pocket Full of Miracles (1961) — and "appeared in original stage productions of works by Paddy Chayefsky, Neil Simon and Arthur Miller, worked with the directors Frank Capra, John Cassavetes, Blake Edwards and Mike Nichols, and co-starred with the likes of Frank Sinatra, Bette Davis and Jason Robards." And of course, with Cassavetes, in Mikey and Nicky (1976), "a dark buddy comedy directed by Elaine May in which the two men played the title roles."

Listening (39'56". In 2006, Falk was a guest on the Leonard Lopate Show, talking about his memoir, Just One More Thing and "about his life on and off the screen — from his work with John Cassavetes to the tumor that caused him to lose his right eye when he was three years old." More (16'25") from Book Soup.

Updates, 6/25: Time's Richard Corliss reminds us that Columbo "taught snooty murderers that, however crafty they thought they were, he was smarter. Every episode in the series was a class struggle, which reached its peak in the mid-1970s, played as a comedy of manners and won by the wily proletarian…. While other members of the [Cassavetes] troupe might flex their Actors Studio chops to chew the material to gristle, Falk usually kept his tone nuanced and conversational; he was one of the few Method-era actors who didn't demand a big screaming scene as a statement of his power and purity. Somehow he knew that he had already commanded the viewer's attention, and that a whisper — or, in Columbo's case, the trademark pause at the suspect's door and a querulous pitch to the phrase, 'Just one more thing…' — was as good as a wail."

Richard Brody takes another look back on the work Falk did with Cassavetes. In A Woman Under the Influence, he "played a road-crew laborer whose wife is free-spirited and eccentric to the point of being considered mad. It's a demanding and conflict-riven role, with its blend of tenderness and anger, compassion and frustration, bewilderment and assertiveness — and, as in Husbands and Mikey and Nicky, it's the role of the straight man who copes with a more antic and less self-conscious partner. It's the work of a rationalist torn with passion. The dryly caustic humor he brings to his roles — even to his role as Columbo — is that of a quietly calculating intelligence that keeps that passion under pressure, and it's the genius of Cassavetes to recognize, to reveal, and to deploy the tension and the heat that Falk — the actor and the man — gives off. As Falk said about working on Husbands, 'There was no character. There was me.'"

Speaking of which, Paul Gallagher has an amazing bit of viewing at Dangerous Minds: "During filming in 1970, the BBC followed Cassavetes and his actors in New York and London making a documentary for their Omnibus strand, examining the unique way this great director made his movies."

"Then there's Wings of Desire," blogs Mark Feeney for the Boston Globe:

The simple way to describe Wings of Desire — not that there's a simple way of describing of it, just as there isn't a simple way of describing love or Berlin or Rilke's poetry or even being up on a trapeze — is that it's a movie about guardian angels in Germany's once and future capital. Falk shows up playing himself (listed in the credits, quite wonderfully, as "Der Filmstar"). He's there to express the belief of the director, Wim Wenders, that movie stars are a kind of angel, too, in their very different way bringing hope and solace to millions.

There's a scene in the movie where Falk is standing by a lunch wagon and talking to Bruno Ganz's angel. Falk can't see Ganz, but he knows he's there. Ganz is shocked that Falk has this knowledge, and it's how we find out that movie stars are angelic, too. Movie stars, in fact, have an advantage over angels: corporeality. They can experience the same sorts of mundane things that those of us in the audience can — and that angels cannot. Falk, in his trademark gravelly-amiable way, is trying to express this to Ganz. "To smoke, and have coffee," he says, "— and if you do it together, it's fantastic." He pronounces that word "fantastic" with a vigorous simplicity so profound, so eloquent, it leaves behind description and bypasses poetry to go straight to philosophy or even religion. It's as wonderful a moment as there's ever been in a movie. What is it Falk's character says to his grandson in The Princess Bride, "As you wish"? Yes, as we wish.

In the Guardian, Brian Baxter notes that "he was deeply affected by the premature death of Cassavetes in 1989, and a need to immerse himself in work coincided with an offer to resume playing his most memorable creation…. He expressed no regrets concerning his career or his dedication to Columbo, though reflected somewhat ruefully, 'no-one was put on this earth to be so well known by two billion strangers.' That modest disclaimer of his success and fame did not deter him from playing the shabby detective just one more time in the 2003 episode, Columbo Likes the Night Life."

"I met Peter Falk only once, more than 20 years and dozens of performances ago, when he was barely 60 but struck the juvenile version of me as an immensely battered ship's figurehead, a wise and soulful spirit who had weathered the wild storms of artistic greatness and the flat tides of showbiz mediocrity." Salon's Andrew O'Hehir: "He talked about how much he missed his friend and collaborator, indie-film pioneer John Cassavetes, who had recently died. But when I asked Falk whether he'd rather be remembered for his performances in Cassavetes's Husbands or A Woman Under the Influence than as the professionally befuddled Lt. Columbo of TV fame, he gave me a tolerant smile. I've long since lost any transcript of this interview, but as I recall it now, he said that Columbo had been very good to him, and he was very grateful. If the public wanted him to play that guy for the rest of his life, he was fine with it."

Updates, 6/26: Once again, Richard Brody: "In memory of Peter Falk, the French newspaper Libération has posted an interview with the actor by Marie Colmant that first ran there in 1996, and it’s a good one."

Edward Copeland walks us through the filmography and adds, "What a range and I can't even add up the hours of enjoyment this man has given me through his work all my life."