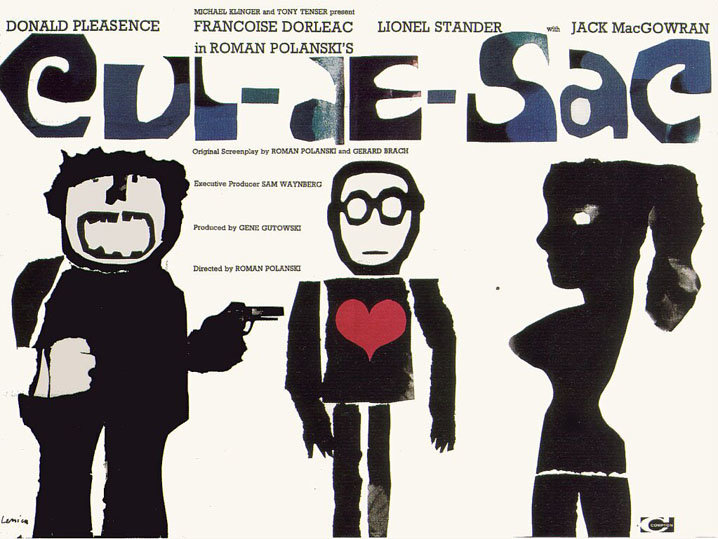 It's been nearly two years since Swiss authorities, acting on a request from the US, arrested Roman Polanski, jailed him for two months and then held him under house arrest for seven more. While incarcerated, Polanski managed to complete The Ghost Writer, which won him a Silver Bear at the 2010 edition of the Berlinale and then swept last year's European Film Awards. While we anxiously await Carnage — his adaptation of Yasmina Reza's play God of Carnage featuring Jodie Foster, Kate Winslet, Christoph Waltz and John C Reilly; it'll see its premiere in Venice before opening the New York Film Festival — MoMA has announced a month-long retrospective (September 7 through 30) and today Criterion releases Cul-de-sac (1966) on DVD and Blu-ray.

"Cul-de-sac remains a searing reminder that Roman Polanski's idiosyncratic grasp of the human mind was once evinced theatrically, rather than through narrative ferocity," writes Joseph Jon Lanthier in Slant. "Where Chinatown, The Tenant, and even more recent films like The Ghost Writer pervert their sense of humanity with plot twists, the moral dynamism of Polanski's earliest efforts are contained almost entirely within their actors — feeble, hateful animals who claw at one another in jaundice as if to hasten some wishful metamorphosis that never occurs. As both a loosening of the triangular, psychic apparatus-like tidiness of Knife in the Water and a more concrete exploration of Repulsion's obliquely trans-Atlantic cultural anxiety, Polanski's tertiary movie now appears a crucial turn outward for the auteur. Taken as the culmination of a casual trilogy with its two predecessors, the film's vaguely noir elements and nervously coiled cast form a jazzy, maybe even dopey riff on how angst can manifest itself interpersonally — in the strained space between bodies as well as within the bodies themselves."

Bill Ryan sets it up for us: A "surprisingly trim Donald Pleasence and his young wife, Françoise Dorléac, have recently retired to an 11th century seafront castle. They are by turns snippy and goofily affectionate with each other. Though when we first see them they are saying goodbye to visitors, it's very clear that they are basically cut off from the rest of the world, unless they choose otherwise. Or unless otherwise chooses them, as happens when two gangsters, one fit and snarling (Lionel Stander), the other weak and dying (Jack MacGowran) force their way into the couple's lives. MacGowran is hardly a factor here, and dies soon anyway, but Stander's hurricane force immediately takes over everything, and the film becomes, while ostensibly a thriller, also a kind of Beckettian comedy of manners, and a Beckettian sexual farce (of the type where sex is never had), and what would happen if Beckett ever wrote a gangster movie." 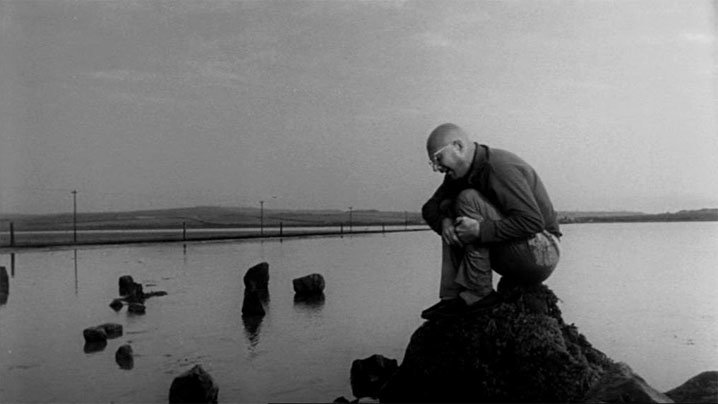 Josef Braun finds that Cul-de-sac "snakes seamlessly between comedy, thriller, siege drama, horror, and social critique, all of it truly inspired and amounting to what is probably the most sui generis project of Roman Polanski's career. Yet, scripted by Polanski and his long-time collaborator Gérard Brach, the film never feels indulgent or aimless. Every scene pulls us deeper into something. Everything moves toward its end…. The film, shot in black and white (and countless shades of grey) by Gilbert Taylor, is riddled with haunting images, alternating between hot sunlight and gloom, and Criterion's transfer is suitably gorgeous. The disc also features a terrific documentary about the film's arduous production and a vintage British television program featuring a fascinating and comprehensive interview with Polanski just as he was enjoying his first taste of global renown."

Updates, 8/20: David Thompson for Criterion: "'It is my best film. I always loved it. I always believed in it. It is real cinema, done for cinema — like art for art.' That was Roman Polanski's view of Cul-de-sac in 1970, four years after its release and just following his hugely successful Rosemary's Baby (1968) and before the similarly acclaimed Chinatown (1974). Would he maintain that verdict today, despite those obvious — and his subsequent — career peaks? I suspect he would. Part of his pride in Cul-de-sac came from the fact that it sprang directly from his imagination, being neither an adaptation nor a response to someone else's demand. The shoot was a much-troubled one, yet the world he created before the camera, both weirdly real and abstract, appears perfectly achieved. As a movie, it unashamedly flirts with several genres — thriller, horror, comedy — but ultimately belongs to none, other than that of a Polanski film."

"Polanski remains one our greatest living filmmakers," and a few days ago, when he turned 78, Kim Morgan wished him all the best with an overview of some of her favorites.﻿