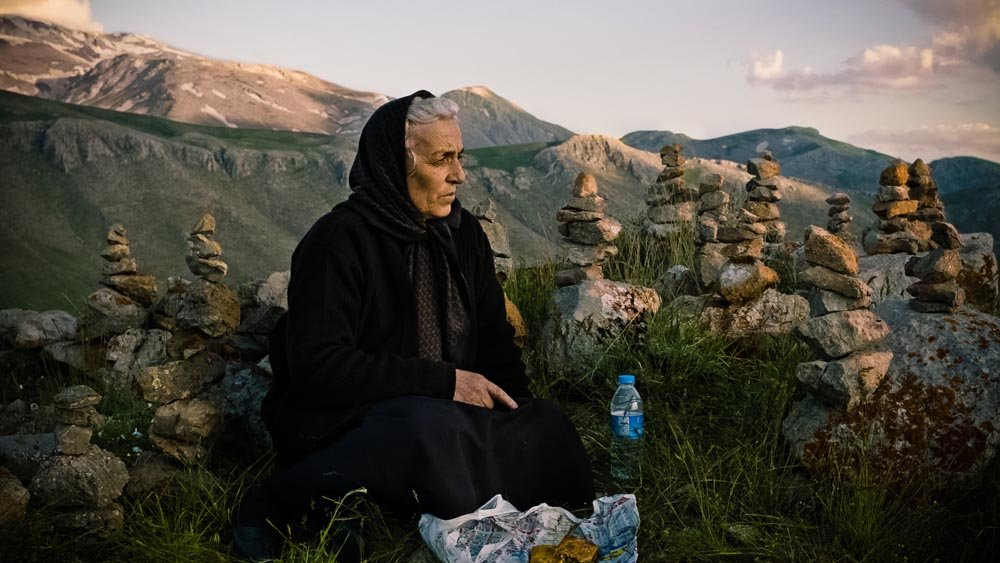 Voice of My Father

De jueves a domingo (Thursday Till Sunday), Dominga Sotomayor, Chile/Netherlands, 2012, 96’, World premiere, Hubert Bals Fund-supported film. Sotomayor’s feature film début, expertly shot by Barbara Alvarez, is a Chilean road movie set in and around the car belonging to a middle-class family. Seen through eyes of the kids in the back, they embark on a four day holiday trip to the north, while the marriage is falling apart. Dominga Sotomayor’s short film Videojuego was screened in Rotterdam in 2010. De jueves a domingo was selected for the Cannes Cinéfondation Résidence 2010.

Babamin sesi (Voice of My Father), Orhan Eskiköy and Zeynel Dogan, Turkey, Germany, 2011, 87’, World premiere, Hubert Bals Fund-supported film. Voice of My Father is a powerful meditation on identity and family ties, and a profound portrait of a country in transition. Co-director Zeynel Dogan plays a character called Zeynel who lives with his pregnant wife in Diyarbakir, while his mother lives alone in the old family house in a nearly deserted village. Eskiköy and Dogan co-directed documentary short films and the feature length documentary On the Way to School. Voice of My Father is a fiction, based on Zeynel Dogan’s family history.

O som ao redor (Neighboring Sounds), Kleber Mendonça Filho, Brazil, 2012, 100’, World premiere, Hubert Bals Fund-supported film. For his gripping. slow burning feature film début Kleber Mendonça Filho expanded on a theme from one of his short films, Eletrodoméstica. In the middle class street where a rich family owns much of the real estate, life takes an unexpected turn when a private security outfit offers its services to the inhabitants. The presence of the guards brings a feeling of security but also adds good deal of anxiety to a culture that runs on fear. In 2007, IFFR presented five short films by Kleber Mendonça Filho as a ‘Profile’ in the short films section.

Zhit (Living), Vasily Sigarev, Russia, 2012, 119’, World premiere. Vasily Sigarev's second feature, after his acclaimed Wolfy, is a grim portrait of existence in a wintry Russian town, showing some characters living through their own ordeal. A mother wants to reunite with her twin daughters; after a wedding ceremony, a young couples’ love is tested in the most brutal way; a boy wants to see his estranged father, despite his mother's protests. Celebrated young playwright and director offers an unsentimental, sincere and personal film on the complexity of life – and death.

Jidan he shitou (Egg and Stone), Huang Ji, China, 2012, 97’, World premiere. In the Hunan province village where she was born, Huang Ji shot her first elegant feature, a quietly disturbing drama about 14-year-old Honggui, who lives with her aunt and uncle in the countryside. It seems she is not very wanted. Her parents intended to farm her out to family for only two years so they could work in the big city, but in the meantime, seven years have passed. In 2009, she presented her mid-length fiction The Warmth of Orange Peel at the Berlinale.

Klip (Clip), Maja Miloš﻿, Serbia, 2012, 100’, World premiere. Maja Miloš’s first feature film is a dynamic, disturbing portrait of contemporary youth. Jasna, played fearlessly by Isidora Simijonovic, is a pretty girl in her mid-teens. With a terminally ill father and dispirited mother at home, she is disillusioned by her unglamorous life in a remote Serbian town. Opposing everyone, including herself, she goes experimenting with sex, drugs and partying.

Sin maysar fon tok ma proi proi (In April the Following Year, There Was a Fire), Wichanon Somumjarn, Thailand, 2012, 76’, World premiere, Hubert Bals Fund-supported film. At first sight, an atmospheric, suitably languid portrait of a young man returning to his home town in North Eastern Thailand from his job in Bangkok to attend a friends’ wedding in the hottest month of the year, Wichanon Somumjarn’s first feature turns into a semi-autobiography, and a journey into the labyrinth of the real and the imagined, the past and the present, the personal and the political.

Z daleka widok jest piekny (It Looks Pretty from a Distance), Anka Sasnal and Wilhelm Sasnal, Poland, USA, 2011, 77’, International premiere. The feature film début by visual artists Anka and Wilhelm Sasnal focuses on a small Polish community during a hot summer. Everyone is either about to explode or come to a complete halt. Hidden aggression, hatred, discrimination, as well as fears, longings and emotional crises are on the edge of breaking through the surface. Using a precise and austere style, the Sasnals create a physical portrait of a micro society that turns into a viscous swamp, unresistingly absorbing any kind of violence.

Ro-men-seu Jo (Romance Joe), Lee Kwang-Kuk, South Korea, 2011, 115’, International premiere. Lee Kwang-Kuk, former assistant director to Hong Sang-Soo, plays the storytelling game with unmistakable pleasure in this elegantly shot first feature. In a web of intertwined stories, a film maker seeks inspiration and finds it with an energetic waitress who in return for some payment is willing to tell him about, for instance, the time she met a suicidal guy called Romance Joe.

Mulgogi (A Fish), Park Hong-Min, South Korea, 2011, 105’, International premiere. Park Hong-Min’s feature debut A Fish is the first 3D film in the Rotterdam Tiger Awards Competition. Little by little, the filmmaker reveals where this unfortunate road movie is taking its characters. In a roadside restaurant, the protagonist, Professor Lee, picks up the detective who says he has found Lee's missing wife on an island off the coast. The men head for the sea, but that night, the professor has a curious dream.

Gui lai de ren (Return to Burma), Midi Z, Taiwan, Myanmar, 2011, 84’, European premiere. Return to Burma, first feature by Midi Z, offers a unique, authentic story from Burma (Myanmar). Xing-hong, a Burmese guest-worker in Taiwan, has the duty of returning the ashes of a friend to their native country. At home, there’s the joy of seeing friends and family. Young people still sing romantic songs and dream of working aborad, like his younger brother. Xing-hong starts to look around for local business opportunities.

Sudoeste (Southwest), Eduardo Nunes, Brazil, 2011, 128’, European premiere, Hubert Bals Fund-supported film. Sudoeste, a tale of fantasy and mystery shot in stunning black-and-white, is Eduardo Nunes’ fiction feature début, after several successful short films, three of which were screened at IFFR. Situated in a sleepy Brazilian coastal village, a baby, a girl and a woman named Clarice seem to live their (or is it her?) life in one single day.

L, Babis Makridis, Greece, 2012, 86’, European premiere. The protagonist in L, a man aged 40, is a more than dedicated driver. His work is his life, and his car is more than a means of transport. He lives in his car, receiving his family at fixed times. His employer is a rich narcoleptic who can’t drive himself. But The Man loses his job and decides to go looking for another means of transport. A unique combination of abstract comedy and existential drama, Makridis debut feature is filled with singular dialogue, a stuttering Mondscheinsonate and a great song about bears.

Tokyo Playboy Club, Okuda Yosuke, Japan, 2011, 97’, European premiere. In 2010, young film maker Okuda Yosuke made a name for himself with his low-budget gangster comedy Hot as Hell: The Deadbeat March. This year, he returns with his first commercially made film, a dry-humorous crime story set in the fringes of Japanese society. A gangster drama that focuses on people who primarily live by instinct, which results in reckless behaviour, bad decisions, and violence.

the meaning of style, Phil Collins, Malaysia, 2012, 5’, World premiere. A deceptively complex Malaysian reverie featuring a cast of skinheads, butterflies and the sounds of Gruff Rhys and Y Niwl in perfect harmony.

Big in Vietnam, Mati Diop, France, 2012, 29’, World premiere. Diop, who won a Tiger Award in 2010 with her short Atlantiques, has two new films including this mysterious tale of a director who gets distracted during a shoot.

Al bahth an madina - fi awraaq Sein (In Search of a City (in the Papers of Sein)), Hala Elkoussy (more), Egypt, United Kingdom, 2012, 34’, World premiere. Idler Sein’s perambulations become a layered declaration of love to the city of Cairo. Shot before, but edited after the Egyptian revolution.

Postcard from Somova, Romania, Andreas Horvath (more), Austria, 2012, 20’, World premiere. Life in the Danube Delta almost stands still. The postcard is a suitable anachronism for a message from this inconspicuous place.

Agatha, Beatrice Gibson, United Kingdom, 2012, 14’, World premiere. A psychosexual sci-fi about a planet without speech. Based on a dream had by the radical British composer Cornelius Cardew.

Field Notes from a Mine, Martijn van Boven, Tom Tlalim, Netherlands, 2012, 20’, World premiere, Abstract documentary about a data environment. Based on a list of cities, villages and unnamed places in North Africa that were part of old pilgrim routes.

Springtime, Jeroen Eisinga, Netherlands, 2012, 19’, World premiere. Maker Eisinga described this performance - which people can now watch - as 'A liberating experience' during which his body was taken over by insects.

Generator, Makino Takashi, Japan, 2011, 20’, International premiere. Generator is a response to the disaster in Fukushima and visualises Tokyo as an eroding metropolis accompanied by Jim O'Rourke’s dark soundscapes.

Im Freien (In the Open), Albert Sackl, Austria, 2011, 23’, International premiere. A three-month sojourn on Iceland linearly condensed into 23 minutes by the camera. An existentialist portrait of an awe-inspiring setting.

La maladie blanche (The White Disease), Christelle Lheureux (more), France, 2011, 42’, International premiere. A night-time party in a mountain village in France; a reflection on the essence of our existence and a monster that preys on girls.

Shadow Life, Cao Fei (more), China, 2011, 10’, European premiere. How something as old-fashioned as hand shadow play can be elevated into a higher art form. A witty, intelligent animation.

5000 Feet Is the Best, Omer Fast, USA, France, Ireland, 2011, 27’. Film based on meetings with anonymous Predator drone pilots from the US military, operating the un-manned flights over Afghanistan and Pakistan.

Ovos de dinossauro na sala de estar (Dinosaur Eggs in the Living Room), Rafael Urban, Brazil, 2011, 12’. Extremely idiosyncratic portrait of an eccentric widow who looks after the impressive collection of fossils and documents left behind by her late husband Guido.