Micro-transactions may be all the rage in the mobile application and video game landscape, but it is an old idea in the world of film festivals, where directors and film titles serve as bite-sized cultural currency, bought, traded, and gambled. What shall we invest in today, perhaps a film by an unknown that won an award as a second tier film festival? If I see it, I may have a small advantage over those here at the International Film Festival Rotterdam who haven't (even if it isn't any good). If I can recommend it to some viewer unsavy to its credentials or its quality, perhaps they can reciprocate with a hot tip. "I'll see your [prestigious auteur] and raise you [film previously no one's heard of]." Shall I take that bet, attend the screening, and reveal the cards? Names and titles pass back and forth here constantly, on Twitter and in the chill, damp Dutch air: "Apichatpong's editor," "Hubert Bals," "festival retrospective," "debut film," "first film in over twenty years," "stark black and white," "only screening once / sold out / already screened / screening canceled." Invest your time, your attention, your mind, your body. And that's only as an audience member, but one side of the screen; woe be to the filmmakers who are forced to use their work in such a game, and are prey to the strange intercourse required by dedicated festival attendees to navigate a program of over 300 films. 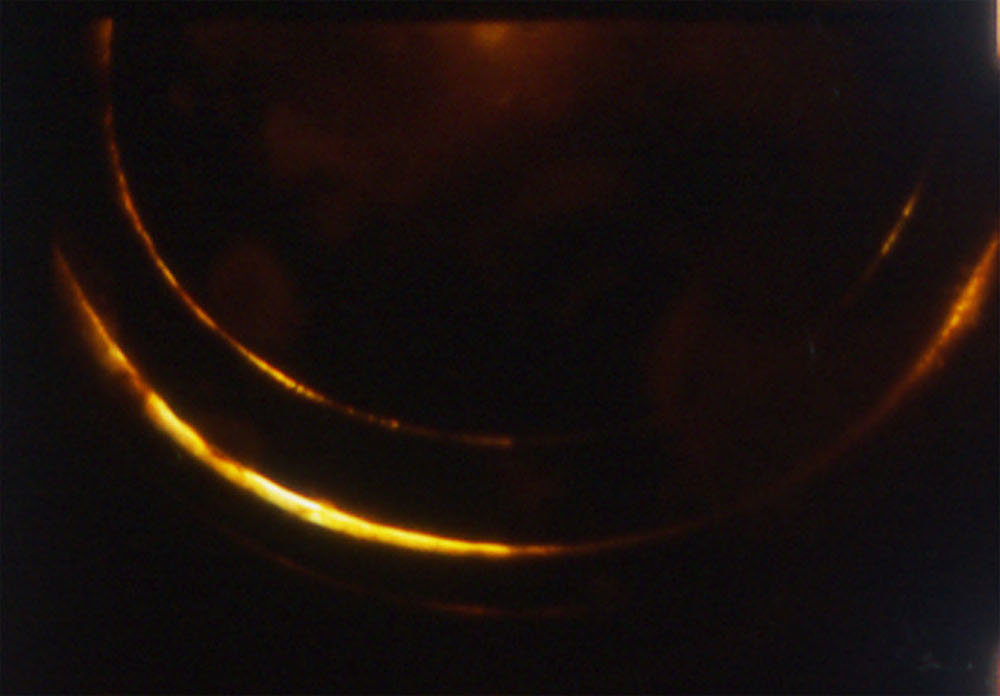 ﻿Above: A Study in Natural Magic

The currency worth more and more to some, including this viewer, due both to its increasing scarcity and marginalization is "shot and/or shown on film." (How's this for high value currency: it's projected on film...35mm...CinemaScope...sideways...in a church!) And if perchance in the festival catalog the figure "16mm" appears, it glows and beckons like a hidden treasure. Perhaps that's why the first program of 16mm shorts I saw was called "Silver"—a glittering name that actually suggested nothing of the solidity of the metal but rather the utter fragility of silver nitrate film, the lone splendor of a silver gelatin print. For reasons still unclear to me it seems positively risky to show 16mm at major festivals now, risky to attract an audience, materially risky for the film reels, and risky politically, too, as showing film on film is now, intentionally or not, a political decision.

And the films spoke of this risky fragility. Charlotte Pryce's tender A Study in Natural Magic is a series of sliver sized examples of film alchemy, golden light and caressing  shadows playing tricks on small, indistinguishable filmed objects making them resemble solar eclipses, sparkling undersea life and blossoming flora. All quietly, but beamingly whispered to us, excited-like, as the successful results of modest, perhaps clandestine experimentation in a sorceress's dark room.

Another miniature, crystalline in its delicateness, was Shiloh Cinquemani's Kodachrome eulogy Blue, but a bare series of nearly identical shots of a vibrantly blue sky, like seconds shaved from a cloudless detail of James Benning's Ten Skies, a brief revelation of a subtly varied hue of a now extinct color stock. The program included another exploration of blue, Esther Urlus's texturally giddy, conceptually subtle and bizarre Konrad & Kurfurst. It combines the always surprising grain-dance of hand-processed films—and in this case even the film emulsion was home brewed—here mimicking the burbling underwater experience of an unusual and perhaps forgotten episode of the 1936 Olympics when the German horseback rider fell off his horse during the water stage of the equestrian contest. Urlus has a horse reenact the experience by showing us the surreal vision of its legs churning beneath the water as the emulsions' grain exposes and then overtakes the image, revealing the photographed and then covering it with the very stuff the film is made of. 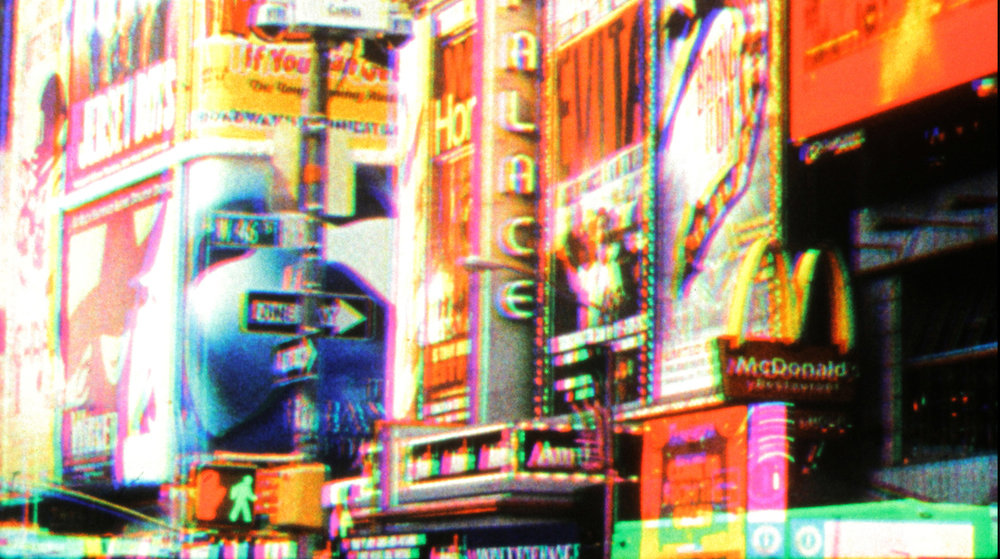 ﻿Leading this particular shorts program was IFFR, Wavelengths, and Views from the Avant-Garde regular Tomonari Nishikawa, whose 45 7 Broadway imagines the hyperactive cacophony of New York's Times Square as a three-strip Technicolor print gone awry,with each color coming unaligned with the others, so images of cars and people and buildings are seen in piercing blocks of overlapping and diverging single colors. But on closer inspection it seems that each color may be a similar shot from the same angle but taken at different times, and then laid on top of others, so what appeared initially a splintering of a single vision on deeper glance may be a splintering of a single time. As if behind any moment in New York there is so much kinetic activity as to suggest a very subtle, very fragile confusion of time. This slant-wise sci-fi aspect is assisted by the whole film's visual similarity to the ecstatic, neon-like Las Vegas see-through vision played under the credits of Roger Corman's X: The Man with the X-Ray Eyes, and indeed the old format and old appearance of New York City makes 45 7 Broadway uniquely inflected by nostalgia for a time past. 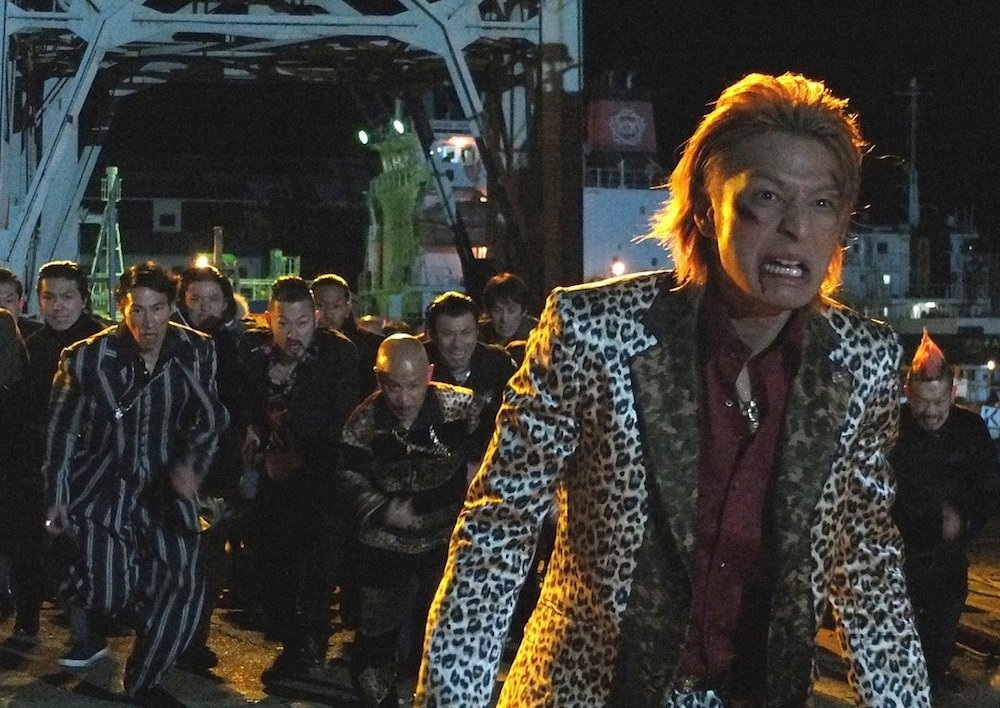 ﻿My final wager of the evening, seemingly a safe play due to its promise of a favored director and the security blanket of genre, paid off weakly: Takashi Miike's manga adaptation, The Mole Song: Undercover Agent Reiji. This sometimes riotous, sillily funny in the best of ways, and steadfastly earnest undercover policier has much to compare with contemporary American comedies that hedge their bets by curtailing insanity to very strict adherence to genre conventions to keep stories "going" towards an "end." A particularly clear series of examples are the films of Adam McKay (Anchorman 1 and 2, The Other Guys), which for all their raucous ad-libbing and performative (or at least logorrheic﻿) freedom within a scene, must, simply must, follow precepts of "character" "arcs" and conventional story "pay-offs" that nobody cares about or needs, least of all these "characters" or the people embodying them.

Why each and every film like this so boringly must move in its overall structure and in so many plot details with such unnecessary predictability, in fact a predictability that is in some ways antithetical to the main pleasure of those movies and serve as roadblocks or distractions from those pleasures; why they do this again and again, seemingly required so by the industry or audience expectations, and still the filmmakers who adhere to these structures and details do such in such a blasé ﻿way  is a mystery. Miike, on the other hand, really does have his cake and eat it too: the epic, often candy colored enterprise of this repetitive and overlong adaptation admirably devotes its full attention both to irreverence and reverence. The Mole Song is never so absurd that the flourished cartoon gesticulations of its characters destroy the drama from without, and is never so earnest that the inflamed dramatics of those characters would undercut from within the servings of pure, inventive silliness. Miike may well be the only director working to genuinely simultaneously embrace the expectations of a "normal" audience at the same time as embracing the wry post-post (and maybe -post) modern ironic and satiric reflexivity of a smugly cynical-savvy viewership.

But the challenge unfortunately isn't just the craftily calibrated balancing act of being true to an undercover cop drama—especially in the fervent seriousness with which his actors attack their roles—whilst being true about it in a silly way, but rather to make sure these interwoven colors of the film are equals in vibrancy. And they're not. There is no reason to invest or attach oneself to The Mole Song's drama, no matter how earnest, because its movements and mechanics are rote, its characters flat, its straightforward parts overlong; when funny, when exuberantly mixing the wacky and the serious, the film is electrically thrilling, as in its energetic first act time-jumbled juggle of the police firing its most moral cop and then training him to go undercover in a series of set-piece yakuza ruses.

I found myself thinking of Edgar Wright's Scott Pilgrim vs. the World—the English language Takashi Miike movie that never happened—and how until its drawn-out finale it was able, through a very clever subjectivity, to achieve the heartfeltness at the core of its honesty and the hip off-handedness and referentiality at the basis of its comedy. The Mole Song can do no such thing: when it's not very funny, it's a bland cop film, a fact that makes the respect with which filmmakers and cast treat the conventions of the story seem like a fight for a dead cause. Yet: what could be more admirable than an honorable adherence to such a cause, however dead?﻿